this week in retail and rage

It was my friday night, so I was lonesome and a little depressed. So I went to the mall.(1) It was important to demonstrate to myself that there're other games than Metroid Prime: Hunters. I wandered around the GameCrease, fondling that which caught my eye, while, in the background, Greg Rucka bought an Xbox 360 and was a moderate dick to the young counter-ape who rang him up. I found noticable cravings for StarFox and (less explicably) Mario Hoops 3-on-3, but the DS was what got me into this mess, so I fought through.

Next installment of enthrallment was a swathe of newly-reduced GCN games. Fifty dollars no more! I'm enraptured by the idea of Chibi-Robo: be a little robot running housekeeping errands around a human-scaled house. A four-inch robot clambering around on caneback chairs and the like? This sounds just...fun to me, somehow. And hey, at thirty bones? That's not fifty!

Spartan: Total Warrior looks like a nifty bash-all-enemies title, and that's a genre that's woefully underrepresented in my collection.(2) The Pikmin games look like a Chibi-Robo-like experience: little critters doing things--things other than fighting, mainly--in a world that's rather large for them.(3)

These games formed a triangle around me, and prepared to unleash some sort of combination attack. I quickly modulated my emotional state from indecision to contempt (coffee helps here) and fled before the games could complete their Melting My Credit Card technique. "You're only like 10 hours long!" I bellowed. "Thirty bucks? A fucking ripoff!" I ran so hard, so fast, that I was at the CD/Game/Levi-Trouser Exchange before I had actually decided where I was going. Wandering their filthy aisles, so much like home, caressing their battered stock, I had an epiphany.

If I can continually score decent Dreamcast titles, seven years after the thing came out, these Gamecube games aren't going anywhere. There's no...rush.

Want to play as little things in a house? Toy Commander. Done. Five dollars down and that itch gets scratched, my man. (I played for like 2 minutes. The intro movie is super-cool, though.)

Emboldened by this success, I savaged a series of used stores, leaving underpaid drones staggered by the intensity and thoroughness of my...shopping. Cheap copy of Capcom vs Marvel 2? Mine! Mediocre action-RPG with awesome production values and the single stupidest intro movie in the annals of gaming? Silver, meet Fat Contradiction! StarLancer? Shit fire, son, I'd've bought BoilLancer by this point in my afternoon.

Flipping through games at PlayInsanity, one of them (shockingly!) was in its original packaging. Manual was of course lost to this world, but the cd-case inlay card was there.

I enjoy reading things written on the back of objects I might buy. In this case, I saw words like "turn-based battle system", "original Japanese voiceovers" and "dungeons".

It's strange, how specific certain urges can be. Lately, I've wanted to play a party-based game with a turn-based battle system. (A JRPG, if we need to get specific on the bitch.) And I want to play such a game on my Dreamcast. Still not clinched, I saw "St!ing"...isn't that the developer of Riviera? Evolution 2, come to freaking papa!(4)

Unfortunately I'm now in posession of everything worthwhile from the local used houses. To satisfy my Sega-lust, I must now turn to the Inter Net, like any common Englishman. Pathetic.

1. It's probable that "retail therapy" is a necessary consequence of an economy rife with commodity fetishism. The research continues.

2. I first noticed this lack when I was overwhelmed by simple longing for Dead Rising. Zombie Revenge helps a lot with managing these longings, but ZR rests heavily on multiplayer, and it's intensely rare that I can shoehorn any company into my basement hovel. And no matter what the Inter Net says, River City Ransom Ex is fucking lame.

3. Reminding myself that these are essentially real-time strategy games helps assuage the craving, as there has never been a genre less congenial for Kathy Contradiction's baby boy.

(4) Grandia 2. According to all the reviews, this is what daddy's got to score. In the meantime... Over to the 'Yard, they recently rejected the first Evolution game. Their review is...sorta fair. If you don't like RPGs, you won't like this one. My own quite specific needs, however, have been met most adequately through the first fiveish hours of play. If something cool doesn't happen after the third dungeon, I might quit playing: this'd be around 6, 6.5 hours, and that's not bad for a 7-dollar game. Certainly better than Chibi-Robo or Spartan's 3-bucks-an-hour mojo...
Posted by Fat Contradiction at 6:23 PM No comments:

Before I launch into today's segment, knoweth, reader, mine servitude to the Finnish Navy was completed several weeks ago. & w/ nearly six years of back pay in markaa in hand, I have granted myself a short sabbatical1.

W/ amplitudes of time, I've picked up the practice, gleened from Fat's retail binges, of popping by the closest Goodwill w/ regularity. The primary target of this exercise has obstentively been cartridges for my pink pearl GameBoyAdvance, but, as these things will go, my net has harvested many other peanuts of the sea.

Bad news first, tho. Let's talk about the one that got away. Last week Portland was in its last heaves of what can only be called a Indian Summer. W/ a bicycle sewn together from spare parts, I hit the road, making a decent 5 mile loop w/ a final stop at the Goodwill2. I'm not looking for anything particular other than aforementioned GBA cartridges. I wander the aisles 1st - selecting a few knick-knacks - before checking the glass cabinets where they keep stuff like, uh, 3 DrillDozers in thier boxes, clearly still shrinkwrapped... Okay, what else?

The sight of this, frankly, floored me. I stood there, nervously shuffling, for about 20 seconds, before retreating to the checkout line w/ my previously selected items. This clumsy response proved totally idiotic, because tho' I decided (rather quickly) I should buy the Dreamcast regardless of whether I would actually ever play it, it took me a full three days to get back to the Goodwill, by which time, of course, it was gone.

Somewhat crestfallen, I sulked into the aisles. Only to discover a PSOne for $9.99! Albeit it had no cables & the top lid seemed a little wonky. But hey, what's a Hamilton in the name of science? I've always wanted one of these! A trip to the book aisle then yields a new copy of the canonical Breaks of the Game. I round out my trifecta by grabbing one of those still-in-box DrillDozers for $9.99. 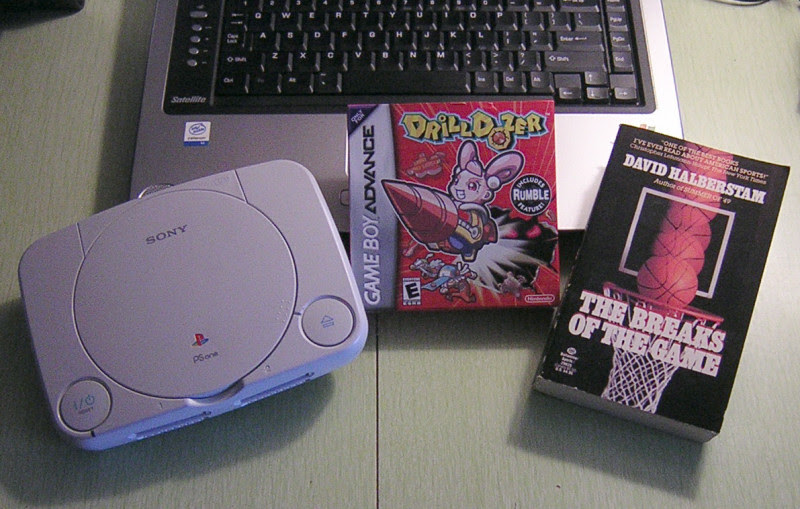 I do. But the sentimental SD Ultraman-stencil-adorned grey box hath been retired to a shelf above my window, flanked by Stikfas & other plastic forms of escape. 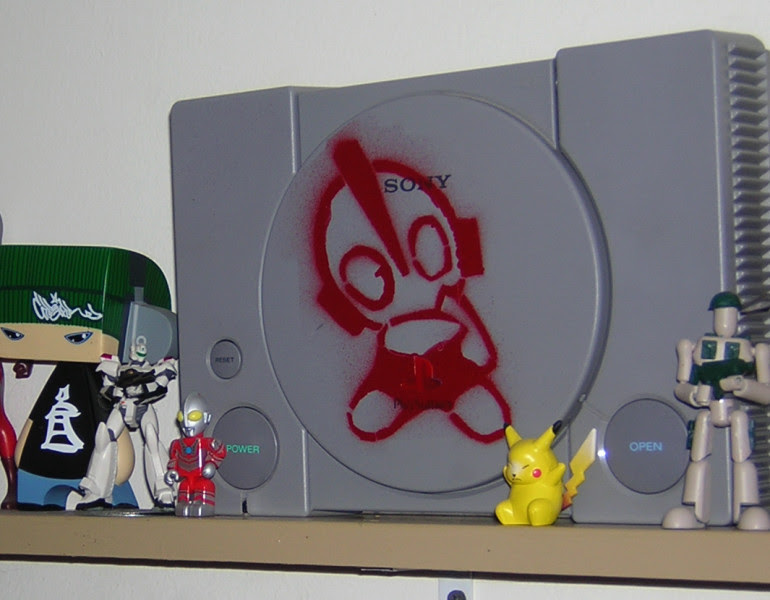 1 Or "practice retirement," if you will.
2 A glorious day! The kind made for errand-running. Borrowed photos returned to a comrade. A trip to Fred Meyer's for publishing supplies. A visit to the CD/Game Exchange on Hawthorne (better than EB et al.) where I scored a much needed GBA-to-GBA/Gamecube cable. From there a liesurely ride down Harrison/Lincoln to the goodwill.
3 Also of note: the PSOne has the other potentials of an optional LCD screen & a battery pack making it portable. These will cost $, but assuming this little PSOne does, in fact, work, then at least my foots in the door for a measely Hamilton.