your hands, my heart: what's so hard about that

Finally made it to a Warriors game last night. Pretty good turnout for a game late in a futile, ruined season; some culture shock, though. The crowd was undeniably Into It, with roused cheers never more than a half-decent play away. And the booting of evil-team failure was as robust as ever I've heard--when some cat missed two consecutive dunks, the rafters went a'-rumblin' for sure.*

And the crowd--to my relief but lack of surprise--passed my bush-league test, by cheering fairly well for the feat of the evening, a hesitation move perpetrated by Chris Paul, resulting in a truly wonderful cradling the ball stride goalward and gorgeous layin. In general, they seemed sure the Warriors would lose, getting ugly at 4-0 Hornets with around 9:45 left in the first. Late, when the game was tight, there would be total silence as Chris Paul plied his vile trade on the perimeter, and surging gouts of noise when West did brick off the glass, and the Warriors took to the offensive (tentatively and glitching).

Oakland boasts a crowd entirely ready to be won over. It's lovely, and a remarkable departure from the Portland crowd, richly blending entitlement and ignorance.

Unfortunately, my Portland-style commitment to heckling didn't go over for shit.** In the third, when my snack-bar excesses began to get on top of me, and as the Warriors gave up the bulk of their halftime lead, the furry hipster twits next to Abe and me were heard to enquire "Whoa. You ever been to a game with this guy before?" Whatever. Fuck you. White people wear sweaters to basketball games.

A few notes. When you show up and the home team has six guys in the layup line? Bodes ill for the evening's competitive balance, no? When the opening tip is botched, a fellow is entitled--indeed likely--to thoughts writhing toward the freeness of the tickets and the eleven dollarness of the pale ale. Early, it was Warriors 10, Chris Paul 10, David West 2. 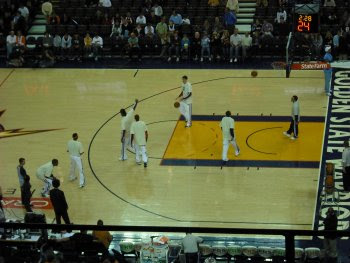 At around 15-12, some cub with a vast, unmanageable head moved in front of me. With some despair, my eyes scampered around for a while.

I will not understand why the franchise's banner is relegated to the side of the arena, essentially invisible. True, it's 34 years old, but that seems a poor reason to quit wallowing in it.

In the first half, the Warriors' unvaunted offensive sets seemed to me to bespeak a philosophy running something like "if we don't run any plays, they can't defend them!". This is particularly amusing given the lengthy, po'-faced coverage in local media on the topic of Nellie's revamped offense. (Halfway thru the season, he realized he didn't have any point guards, and if you can't run a real offense, you might as well have one guy trying to break down his man off the dribble while four guys camp on the 3-point line, waiting for their defender to do something stupid. PROTIP: their defender will eventually do something stupid.)

Sobersided analysis aside, if you've got a backcourt of Crawford and Ellis, you might actually as well just let them freelance a lot and spend your evenings hollering "pass" every couple possessions. Beats actually trying to design sets cohering around Stephen Jackson's (functional, Raphaelite***) insanity.

Eventually I remembered the atrocities perpetrated by David West--second in a noble lineage of History's Greatest Monsters at the four from Xavier--vis-a-vis my crippled foray into fantasy basketball this season. My thoughts turned away from my second trip to the bar (not the snack bar) and turned towards a fraught yearn that somehow, some way, my words could reach the man and ruin his life.

The evening bloomed into a middling example of late-season meaning. Hornets exposed as a pathetic mockery of a contender, with CP3 a selfish gunner incapable of involving himself with any team member. Warriors demonstrating again such a thorough commitment to pointless, head-down freelancing that they must actually be being coached into it. Warriors fans intense, tense and grateful. 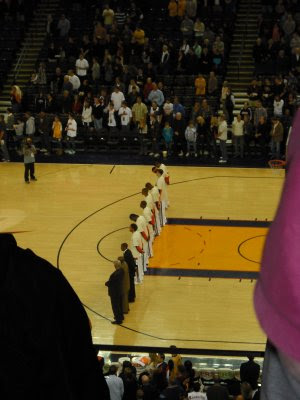 *After the second dunk-butchery, CP3 ran down the board and took it to the hole himself, unopposed breakaway. The cat who'd missed the two dunks was right next to him, wide open obviously and necessarily. This savage violation of every rule of point guard play led me to bellow "Paul, you're in the hall of fame of bush-league hacks!" This was recieved like the introduction of pornography to sunday dinner.+

+I should note that I adored (major swathes of) Andre Miller's Nugs tenure, which featured nigh-endless callings of his own number. My rule of thumb was that if he had eight assists, he'd probably only actually passed twelve times. The difference is that nobody worth listening to ever said Andre Miller was a good point guard.

**At a Lakers game some years back, DDT at one point reduced me nearly to tears by hollering "Tonight we raze the peninsular villages!".

***The other one, the Ninja Turtle.

Heckling is, I think, an exponent of Portland's peculiarly thorough involvement with localism (equally describable as Portland's compleat obsession with its piddly, second-rate self). Since everybody on stage is literally your neighbor and peer, there's no barrier to abuse, no separation between performer and audience.++

Now, Oakland is at least partially infected by the Bay virus of self-importance and utter absorbtion into self. The difference is that Portland at least knows it's no first-rank city; the Bay genuinely believes it's a cultural heavy hitter, on a par with New York, London, Paris. Which blends the annoyances of the second rate with the frustrating asininity of the delusionally self-important.

But, since Oakland thinks it's great, and thinks its products matter in the grand scheme of things+++, some jagoff in a black sweater hurling abuse at a putative MVP candidate is likely to be a nutjob worth ignoring, rather than one voice amongst a panoply of same, perhaps an initiator of conversations and a positer of position.

And yes, I do get that heckling is a twerpy manifestation of smug hipster claims to importance, wherein the act of judgment is held to be at least equivalent to any act of creation.

++This, by the way, explains why a heavy metal band like Poison Idea is such a conundrum for categorizers of music. In formal terms, they are undeniably purveyors of moderately competent heavy metal. However, there's something not easily definable about them that queers and clouds the issue something fucking fierce. Best way to explain it runs: it's metal played by punks; they're from Portland.

+++With the exception of Neurosis, they don't, they really really don't.
Posted by Fat Contradiction at 1:00 PM No comments:

I don't that often do this, but this review actually made me laugh out loud. More than a single time.

In other news, I'm broke as a joke, working 50-hour weeks to try to make up for it, and desperately craving the following:
new hat (black, summer weight)
new shoes (two pairs Starburys, prolly)
MadWorld
House of the Dead: Overkill
Grand Theft Auto DS (I keep trying to remind myself that it's a driving game, and I basically can't stand driving games)
new front wheel for my commuter bike
new brake cable for my fun bike
new bike bag (I loathe my backpack)
new pants (bike wreck shredded my work pants, and nothing else I have is entirely appropriate for an office environment)
DVD player (so I can enjoy my new Venture Brothers Season 3 dvd)

Oh yeah: I'm going to a Warriors game tonight. So I got that goin' for me.
Posted by Fat Contradiction at 10:16 AM No comments: