Folks Lookin' for Trouble Tend to Find More Than They're After

What do attack dog pitbulls, cottonmouth rattlesnakes, lowlife degenerate drunks, and an ex-con with a rapsheet full of violence arrests all have in common? You'd be best to keep mindful and watch your step around them. But also, that there are some folks who have no choice but to learn how to live with them. 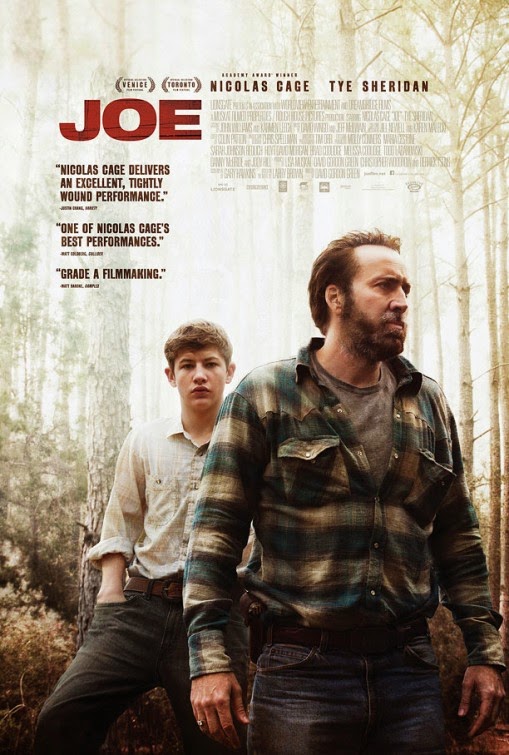 Joe (2013, David Gordon Green) is a rural tragedy about a fortysomething loner that finds himself taking account of what really matters after a long life of learning to survive in a tough Southern backwoods populated by crooks, swindlers, drunks, and the remaining souls trying to find a decent plight in the midst of all of this.

Joe Ransom (Nicolas Cage) makes his living running his own business with a crew of laborers he organizes to chop through forests poisoning the timber to clear the land so that contractors can replace the forests with better trees. In the small Texas town where he lives everyone knows him and his reputation. Joe's honest. Joe's a good guy to have a whiskey with. And he keeps to himself. But he can only be pushed so far before you'll eventually find his dark violent streak, and his buttons are not hard to find.

Fighting against total submission to his savage instincts, Joe seeks to love.

If Joe were pitched at Warners in the early Thirties it could have been described as: A wild brute wants to settle down after a hell of a life but has to buy his redemption at the cost of saving a troubled youth.

David Green delivers some heavy brooding spot on storytelling thanks to this simple, honest, masculine milieu. There are two threads to the narrative. First, Gary Jones (Tye Sheridan) is the central character in the story of Joe's redemption. Secondly, there's the story of Joe trying to be alone; because, the dame, and the independence that comes from owning his own business are stabs at domesticity.

Now that all the boring formal description is out of the way, Joe's got teeth. The boy Joe must save has a garish nightmare of a dysfunctional homelife. His mom and dad are whitetrash alcoholic hillbillies who are dumpsterdining and squatting in a condemned sinkhole of a shack when we meet them. The dad, Wade Jones (Ozzy Poulter) is relentlessly cruel and himself a depiction of one of the basest of all depraved monsters. Wade beats his family and worse, although it hurts to even imagine. Wade drinks for a living while oppressing his hangers on kin with what is most remarkably his own twisted ideals of love.

If Joe is a pitbull, Wade is rattlesnake. There's a parallel when Joe first picks up the rattlesnake before he meets Gary: Joe releases the snake unharmed, telling the other workers not to harm it because it's his "friend." And finally at the end of the movie when Joe confronts Wade, in a strikingly tender surrender he pleads with Joe and asks him: "Are you my friend?" the theme coalesces.

Joe is worth digging into.

Wingo and Tim blend their talents perfectly in the opening scene when we cut from Gary and Wade on the traintracks seamlessly with the soundbridge into Joe smoking a cigarette, emerging from his pickup truck to be tracked into the magnificent rainy canvas populated by soaked workers and pines along the mid and background.

Cage is dynamite and Tye is forceful.

Brenda Isaacs Booth is disturbing and beautiful as Mother Jones. The way she says "that's good babies" when she's just talking to Gary is a running David Gordon Green touch--pluralizing a noun that should be singular.

David Green finds himself getting the best moments out of the cast setting up the everyday workings that most filmmakers mistake as background. The general store clerk, whorehouse couch potatoes, barflys, and his pals at Blind George's poker games to name a few. But Green has discovered some gems of character actors. Namely the leader of his forest-clearing crew Junior. Junior is played by Brian Mays, owner of Sam's BBQ in Austin, TX and a man who's never acted before. Mays's growling drawling gold-tooth filled colorful speeches are not too far from how he talks in real life.

And Ozzy Poulter, who plays Wade Jones had also never had any prior experience acting either. Ozzy's charisma in real life will always transcend any possible readings I could have into this character. He was a good friend to me. The inscription on the denim varsity jacket that Wade wears in the film comes from Ozzy's email address. David one day liked gdaawg@hotmail.com and the next thing you know, that character now has an awesome jacket that says G-Daawg on the back. Ozzy loved to breakdance and charm everyone he met, especially the ladies. You might not know it watching him in the movie, but he was one of the kindest and joyful people you'd ever meet.

The pitbull and the rattlesnake will survive the only way that they know--violence. And it takes a dark telling to truly appreciate the brightness in Green's sensibilities on family and friendship here.

--Dregs
Posted by Dregs Erroneous at 12:32 PM No comments: