The Streets of Dobuita are Never Lonely 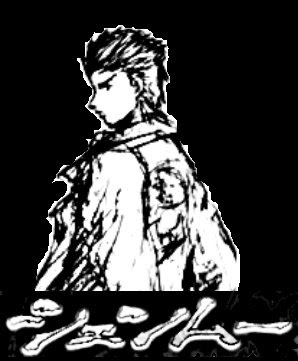 I'm on the fuggin' warpath.

I am in the midst of a four-sided multi-console pronged offensive.

Tired of dicking around, I shelved the (more) recently started stuff (Grandia1, Shining Force: Legacy of Great Intention2, Harvest Moon GBC, Hoshigami3) and went all out on the Really Quite Far Along crowd.

After careful but unnecessary preparations I made my run on the intimidating Ikuto dungeon in Phantasy Star II4, and, honestly, it wasn't as bad as I had anticipated. Got one last run away to complete it. This will leave me with merely Menobe, Naval and Noah to complete, all of which look considerably less complex in terms of maps (tho presumably more difficult in terms of the randoms). This front on the Genesis/Nomad secure, I pushed on into more daunting territory.

Quickly suffered a set back when I discovered I'd lost some crucial interest in Final Fantasy Tactics5 on the PSOne (I'm on the fourth and final chapter), but put it in a holding pattern and redoubled my efforts on Pokemon:FireRed, yielding punitive results: the 8th and final gym badge, a massive leveling grind to eventually beat the dogged Rival Trainer, and advancement to Indigo Plateau, the HQ of the Pokemon League. When not slaughtering Weezings, Grimers and Machokes, I put my non-handheld efforts into Shenmue, where I'd left off on the gripping forklift-operator/get-in-fist-fights-after-work-stage.6

I hadn't really touched Shenmue since the kids were born back in October so I guess I forgot how much time I'd put into to it. Like many others, I'd gotten stuck at on that goddamn "sneak into warehouse No. 8 in the old warehouse district to meet master Chen" stage on Disc 2, and had walked away from the game for a bit. I eventually figured it out7 and did the forklift thing but once you get that job the game takes away the joy of going to Dobuita during the day from you.

Instead, you wake up to yr alarm and then yr automatically getting off the bus down at the harbor and then yr automatically sitting on yr forklift revving the engine as you and yr mates get ready for yr patently illegal "morning race" around the docks (and you don't even gamble on it!). I guess walking all the way to and from work might wear some folks out but some sort of "Go to Directly to Work / Putz Around a Bit First" option would have been nice.

Anyways the Harbor forklifter segment feels considerably more, uh, I guess the term would be "action game on rails" (like rail-shooters, but with Shenmue): you wake/race/move boxes around/get a clue at lunch/move more boxes around/get in a fight at night, walk home, save, sleep, repeat.

To Shenmue's credit, just when yr starting to get a bit bored, shit seriously escalates. I don't know if its predetermined or if I just got lucky this way but on Christmas Eve (!) Nozumi gets kidnapped, you race a motorcycle to rescue her, fight like 8 and then 10 guys at once, and give Nozumi a ride home on the back of the hog while some ballad plays. Then you and Gui Zhang fight, and then the two of you fight 70 guys non-stop using a simplified version of the Virtua Fighter engine, but its like this totally awesome '80s action flick, 'cept w/o the guns, but totally with the quips! Then comes Ryu's best line in the game, "TAKE ME TO LAN DI!" after kicking Mad Angel ass all over the docks. Then there's some other shit but basically yr on the boat to Hong Kong.

But there's all these dangling subplots, and as awesome as the game was, I'm just disappointed because all that's left is to get Shenmue II on import. And then that's it. I mean, I can tell from the Shenmue experience that Shenmue II prob doesn't resolve all the shit left hanging from the first installment.

One regret, which I suppose I could use an old save-state to rectify.

First, I'd like to spend a day in Yamanose, Sakuragaoka, and Dobuita, respectively, just paying attention to the comings and going of their respective residents, taking in the detail. You pick up a lot of this detail as you plunge forward with the whole revenge-yr-father's-murder thing, but the clock is ticking, afterall, so I feel like I missed a lot.

Secondly, I hand drew a map of Dobuita at one point, based on the one posted at several points in that district. My intention was to label every building on the map, since every building has a name, whether it be the resident business or an apartment-type building.


1 As much as I adore Grandia, I've left it sitting for the time being, lest the list of Vested Games grow too large. However, I did spend an evening with it a few weeks ago, and am still thoroughly smitten. When the current Offensive of Completion is, uh, complete, Grandia's a the top of my list.
2 I was splitting Nomad time between Phantasy Star II and Shining Force fairly equally until deciding to Get On With It with PSII. Tactically, Shining Force had just kicked it up a notch by adding an enemy unit which fires a laser (!?) capable of hitting (and usually killing) the majority of active units (allies and enemies, non-discriminately) on the field in one shot. Jeepers!
3 As a quick aside, I have not found Hoshigami to be as mind-numbingly difficult as some reviews have led me to believe. I will confess that, as is to be expected of an Atlus title, the menu and command structure of this tactical RPG is rather counterintuitive, and it does do the Fire Emblem thing where characters can not be revived… but otherwise good old leveling at the "Tower of Trial," which exists specifically for the purpose of leveling, has made the battles thus far in the campaign challenging and interesting, but not impossible.
4 As I near the end of Phantasy Star II, I figured I'd maybe actually go back to playing it on the teevee rather than exclusively on the Nomad. Man, those 16-bit graphix and colors just take a beating when all blown up on the big screen. Immediately yanked the cart and re-fired up the Nomad. Contrary to most stuff I've read abt the Nomad, I've found that sidescrollers and shooters like Sonic, Streets of Rage 2, Gunstar Heroes and my beloved Ranger X all kinda suck on the Nomad. Too much of those games lie in the details, and I'm sorry, but I just have difficult seeing little stuff like the rings in Sonic on the Nomad screen. RPGs, on the other hand, which are usually poo-pooed as bad for the Nomad due to small text size, I've found to be excellent since speed, reflex and detail don't matter as much.
5 I initially purchased and got really really far in Final Fantasy Tactics back in 2001 or so, then, for reasons kinda lost to me, just stopped playing.
As I started the 4th chapter (for the second time), I realized that FFT's greatest strength is also kind of its fatal flaw: the job system. Now, I, for one, think the job system's the best, to the degree that is the primary source of moreish-ness which drives the game – the self-set goals to get character X to master-level Dragoon and character Y to master-level Geomancer and so forth is far more engaging than much-hyped but ultimately dry-as-fuck grand narrative (seriously, its retarded, unless there's some seriously mind-blowing gigantic twists in the finale I don't know about, but at this point the narrative's ultimate end seems pretty predictable to me).
But around the beginning-to-middle of the fourth chapter you'll probably have attained most of those high-level job goals, and are suddenly left with just the actual battles and the narrative, and while those high-level jobs sometimes allow you to fuckover the game, the game also still treats you like a little bitch a bunch with just ridiculous high-leveled bosses and such, all of which just leave me with a big case of "meh." I'll still give it another go.
6 I remember that rainy march day in 2007 well. I was supposed to meet Fat after work for a couple pints, but he was running later than me, so I hit the nearby Goodwill to kill time before heading to the pub. I walked out that Goodwill with a Dreamcast microphone, 4-in-1 VMU, Phantasy Star Online, Soul Calibur, a Dreamcast Gundam game (which Fat bought off from me), and Shenmue, all for 4.99 each (or less, tho' I think they were all 4.99) in hand.
7 Got so frustrating I was forced to make a map, prob the 1st time I'd had to do so for a video game, like, ever. 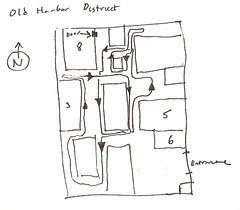