shallow are the ashes (of the children of men)

[Being the 7th installment of stuff I've been reading recently.] 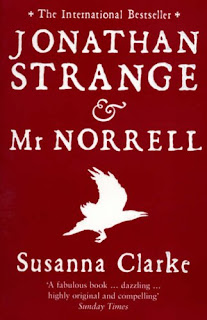 In the midst of the Napoleonic Wars, one Mr. Norrell has assembled the greatest library of magical texts in all of England, and with a showy display at York, revives the art of Practical Magic (as opposed to mere Theoretical Magic). Desperate to assist the war effort, he brings a Minister's young wife back from the dead with the assistance of a Faerie (the Man with the Thistle-Down Hair) in order to win favor with the Cabinet. He goes on to aid the British navy, conjuring up fleets of ships made from mist to blockade harbors.

It is around this time one Jonathan Strange makes Mr. Norrell's acquaintance and becomes his apprentice. Strange journeys to Spain where he operates as a field magician in the service of Wellington's army with much success.

However, when Strange returns his opinions of the practice of magic have changed to a more laboratorial approach, as opposed to Norrell's more bookish approach. Norrell also fiercely opposes any contact with Faeries, while Strange desparately wants their assistance, as the greatest English magician, The Raven King, was faerie educated.

The Man with the Thistle Down hair continues to abscond with English men and women, eventually driving Strange to Venice, and causing him to become captive in a tower of billowing darkness.

Jonathan Strange & Mr. Norrell is a weighty tome clocking in at the 800+ pages mark. It is written in a Jane Austen style, but I have to confess I've never actually finished any actual Jane Austen or the like, so I suppose in a way it’s an Austen-style but actually reads a little easier. On reflection, individual chapters are really brilliantly paced – a steady build to the next event, while the characters behave according to the norms of the period. Physical and social settings are era appropriate, sometimes delicious.

The real brilliance lies in the footnotes, which contain a detailed fictional bibliography of the History of English Magic. As the story unfolds, it becomes clear that Norrell and Strange are very (very) minor league English magicians, only doing their best to stand on the shoulders of giants. Especially the Raven King, a human raised by faeries who appeared in Northern England and acquired the same from the English king as a kingdom of his own (a claim he technically still holds – George III is only northern England's steward and caretaker), who takes on the dread proportions of nightmare as his history is revealed footnote by footnote.

The book is not for everyone, however, mainly due to the period-authentic pacing and writing style (easily slow and plodding, if one is impatient), and, as above, the main characters are rather mundane and not even supremely talented at the practice of magic.

Still, it’s a fresh piece of fantasy ("steampunk" even, of a sort), and one shouldn't just read Lieber and Moorcock forever (tho' one certainly could).

Email ThisBlogThis!Share to TwitterShare to FacebookShare to Pinterest
Labels: bibliographic essay, hands are more than a way to interface with a controller
Newer Posts Older Posts Home
Subscribe to: Posts (Atom)