This guy walking by just
issued this huge belch
and didn't excuse
himself. Mo and I
exchanged disapproving
eye contact and
headshakes.
11:11AM Sat, Jul 26

Fat's in SanDiego at Comicon. He took the time to file some field notes.

because I didn't think it was very funny. Not that I thought it was offensive, just I think it particularly funny. Also, I had no coffee yet.

Then, later, he "accidently" sent me this one…

DDT hated this joke,
but at Comicon, every
fifth shirt should read
'Got Asperger's?'
1:01PM Fri, Jul 25

To which I responded…

Because 'every 5th shirt' IS funny. Context!
Posted by d.d. tinzeroes at 11:59 PM No comments:

NBA Gaiden: Ben Gurion slouches toward Beth Lehem and buys her a drink

as the failing eyes of Stern David turn away, one thousand pointless voices strive to make a horrible joke about Brand Disloyalty

A prime tactic in Reviewieran praxis is the imposition of story on things perhaps not inherently narrative. Eventually--and it don't take long--that thing becomes so imbued with story-quality that it becomes difficult to partake of it without story. Which is why random NBA games between teams I'm not invested in are essentially unwatchable visual noise at this point.

Without context (backstory), the grace, athleticism, &c., no longer compels. Thus, we find ourselves languishing amongst Contradiction's Consequences:

turbulent stories being better than bland ones
and excellence/winning being bland
we prefer Bad Teams.

This Consequence befinds me in literal transition--from Portland to Oaktown--and DDT in transition away from the Blazers. Organizationally, they've become competent and aggressive, and in a crucial development, possess the resources to enact their visions! To put it another way:

I leave behind this Spurs-like assemblage I can neither fault nor care about.

My new position is perhaps more enviable, local to a Warriors team that bulletpoints like so:

Richardson aside, there's not a special player in the bunch, and even Richardson is a pretty pedestrian brand of special.

Whatever. The best part of the ride of a rollercoaster is the feeling of endless descent, the vertigo where friction yields wholly to gravity, and everything becomes inertial. Eventually, the Warriors'll bottom out, endure a series of sickening lurches, and clang to a halt. That'll probably be ten years from now, when I'll be ready to move again.

Posted by Fat Contradiction at 10:41 AM 6 comments:

Balls Shot Off for a Cause 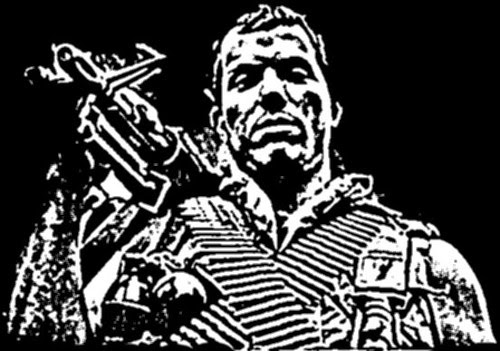 It'd been a while since I watched any Kubrick, but recently I stayed up 2 late 1 night watching, of all things, A.I. on cable.

Frankly, I was shocked, SHOCKED! (I say) at the jarring transition from Kubrick's subtle, complicated meditations on robot ethics to Speelburgo's schmaltzly Pinocchio pastiche. The trauma was enough to (finally, I guess) make me realize, profoundly, the (totally obvious) detail + care of Kubrick's craftmanship.

I was quickly reminded of an article I had rushedly read regarding Full Metal Jacket at the library front desk during my college years. Said article detailed several scripted scenes which Kubrick never shot or chose to cut out of the final version of the film, mostly in direct reaction to critics' praise of Platoon.

Some rather painstaking internet research later, I was able to locate said article, key excerpts I quote hereafter, in the spirit of my previous bibliographic essay.1

1st up is a pair of cut scenes from the Parris Island sequence which, while not related to the "this-movie-is-not-Platoon" angle, do highlight what I'm talking about w/ Kubrick's killer instinct in dealing w/ ambiguities rather than holding the audience's hand in AI. In this case, in regards to Sgt. Hartman:

Two scenes were eliminated which would have made the drill instructor a monster: one where he nearly drowns Pyle in a bowl of urine, and one where he orders a recruit who has cut his wrists to clean up the mess he’s made before reporting to the doctor.2

One must confess, these 2 scenes would have been so over the top they would have made Hartman a bit of the cartoon, whereas instead his jocular language, while inducing giggles at 1st view, in fact are imbued w/ the meaty language of indoctrination to the ways of killing.

As interesting as this may be, the following selection is the 1 I have routinely semi-quoted whenever the conversation has turned to Full Metal Jacket in the last, oh, 8 years:

Kubrick during the year-long shoot stripped away the elements in his own script that made Joker someone with whom the audience could identify: his voiceovers reduced finally to four or five; the instinctive revulsion that impels him, in a scene that was either cut or never filmed, to kill an Arvin colonel who is murdering prisoners during the helicopter ride from Da Nang to Hue; and his death and burial, which would have concluded the film on an elegiac note – replaced here by the group-shot of soldiers singing the Mousketeer anthem that was originally planned for an earlier scene, after the assault on Hue.3

For starters, the 1st point was clearly cut to demolish similarities or comparisons between Modine and Charlie Sheen's character in Platoon. I see a similar logic to the 3rd point in regards to William Defoe's character in Platoon, as well. The 2nd point simply makes Joker to sympathetic to the audience, and paints the film in good/bad right/wrong terms which make the audience feel good abt itself.

Not that it matters, anymore. Since Saving Private Damon any movie with any wartime setting is basically 100% war-porn.