As DDT muses on Astro Boy and upon Akira versus Blade Runner, I read somebody finally telling my truth about Watchmen: great mostly because historically important, not so much because of its actual success in/of execution.

For ten years or so, I've been wondering if maybe I loved it so much b/c I was so embedded in the superhero genre. What would somebody think of Watchmen--or the Dark Knight stuff--if they HADN'T grown into a Marvel Zombie as a reaction against their father's love of Superman comics? My contention is that the primary genius of these works is that they reimagine certain genre conventions; as such, they may be smarter and more interesting than straight works in/of that genre, but they have less energy and actual invention (as opposed to reaction) than straight genre pieces.+

Or maybe I'm just suffering from Watchmen fatigue, b/c I read it at like 14, and read and reread it in my obsessive way(s) and have been hearing everybody ELSE babble on about it for a year or so now. (See also my recent suspicion that Moore, for all his smarts and skills, doesn't have much to say.)

At some point, I should go back to my Levi-Strauss, bone up on my structural study of myth, and show that Watchmen is the most structually* perfect** piece of mass-market art ever made, probably.***

I don't know why I never thought to google her before. I literally grew up on Crematia Mortem, a KC version of Elvira, with more wit and smarts. Late-night horror flickering on a too-small tv, all the ads tiny local businesses, up late on jellybeans and the sheer adrenalized pleasure of being up late for its own sake. Nothing like this exists anymore, probably. There have, naturally, been greater losses, but some cursory googling and clicking I find myself heartened by the reasonable amount of information out there. Gone and lost, yes, of course, but at least not forgotten.

Quick reviews:
Phoenix Wright (DS): Pretty good. Point-and-click "adventure" game, basically just a reading game. Like playing an episode of Perry Mason. Nothing in the world wrong with playing an episode of Perry Mason.++ I have a minor quibble that all the stores are lighthearted stories about murders. It's a wierd disconnect. I'm impressed by how quickly and thoroughly the makers make me care about Phoenix's (quickly murdered) mentor. Not sure how they do that, exactly; might be the titties. 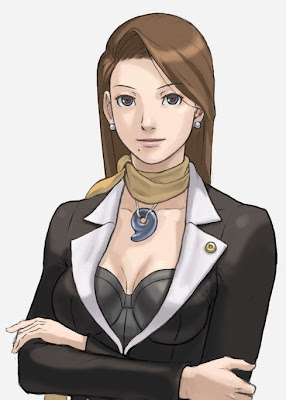 Jake Hunter (DS): Pretty good. Even more of a reading game than Phoenix Wright--actually basically a visual novel. And not a very good novel at that. Got HORRIBLE reviews and I can't really tell why. Not a great value for money, I guess, but for 20 wing-wangs, I really am not prepared to bitch too much.

Touch Detective (DS): Lighthearted point-and-click adventure game; much more of pixel-hunt and DESPERATELY ANNOYING puzzle play than reading play. I love the visuals, loathe the puzzles, am basically enthusiastic about the whimsey. There's a LOT of whimsey. Typical Atlus game--wonderful style, but substance that's undercut by its insistence on difficulty.

Hotel Dusk (DS): If you play only one point-and-click adventure game with a HEAVY reading component, give Phoenix Wright a skip and try this one. Couple really wonderful puzzles, well-honed noir text, and an exceptional sense of tone, with resignation nicely leavened by humor.

Final Fantasy: Crystal Chronicles (GCN). Finally got my GameCube back, and dicked around with this for a few nights. It really is absolutely gorgeous and fairly dull with only one player. Maybe I think it's dull because I really suck at action RPGs. But this is just a less hip version of the equally beautiful, and equally dull, Phantasy Star Online. I have a minor plan to browbeat DDT into buying a DS so he and I can annihilate space and play the new DS version of Phantasy Star Online, but I don't think this will ever happen... If it DID happen, then my penchant for creating support characters maybe wouldn't get me killed all the fucking time.

Oh, who am I kidding? DDT would pick like a ranged magic user or something, I'd pick a ranged combat person, and we'd get squashed constantly b/c we refused to just play a fucking tank.

Alien Hominid (GCN): ABSURDLY hard run-&-gun shooter. One-hit kills, stiff controls, good but tension-enhancing music. I'm playing it on medium, and really the only version of the game I can play at all is "how far can I get before I have to continue". Brutal and not actually very fun (similar to PN.03, actually) but weirdly suffused with genuine joy. It's clear that the art--all of the art--was loved as it was being made, and that carries me through pretty far. Well, as I mentioned, I don't actually get far, but it keeps me coming back to try to perfect and polish my performance of the tiny fragment of the game I'll ever actually get to see.

Viewtiful Joe (GCN). All the good stuff about Alien Hominid, but substantially more accessible, without being in any sense easy. I will likely never finish this game--it's one of the first ones that I picked up when I picked up my GCN for the second time--but playing through the first few bits has been one of the most reliable pleasures the medium has ever offered me.

Onechanbara: Zombie Bikini Slayers (Wii). Because my main problem with Zombie Revenge really was that all the player characters and bosses weren't hot half-naked chicks. There are some wonderful things about Japan, and this infinitely stupid game is one of them. Plus, it demonstrates beyond any disputation that No More Heroes got a hell of a lot right about its combat, b/c all the criticisms more or less unfairly levied against it are actually accurate when it comes to Onechanbara. But come on. You're playing a game with "Zombie Bikini Slayers" in the title. The fuck did you expect?

+The pirate stuff, while still striking me as basically pointless and baffling in its inclusion, is a straight exercise in genre tribute. As such, it's energetic and fun in a way that nothing else in Watchmen is, really. Except maybe for the romance comic tribute denoument, when Dan and Laurie get to gad about in exciting new wigs...which also, of course, is another genre exercise.
*In the sense of structure as known by structuralists. This word probably should have been structuralist-ally.
**In the sense of "complete", not in the sense of "good". It's finished off exactly the way it was supposed to be, for better or worse.
***Don't laugh, but Star Trek: Nemesis is also structurally perfect. Misbegotten and dull, but perfect.
++All punks love Perry Mason. I don't know why.
Posted by Fat Contradiction at 1:42 PM No comments:

Turns out the world if full of Astroboy graffitti. 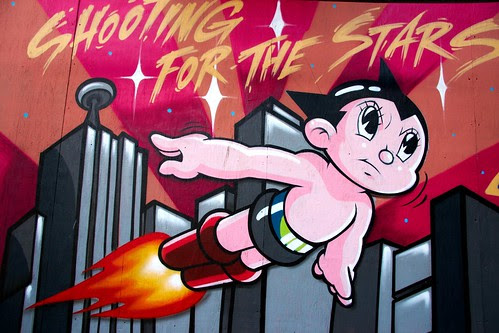 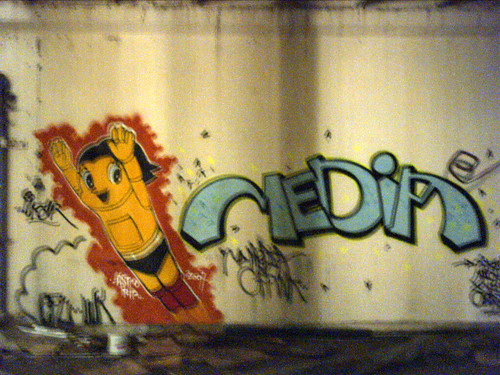 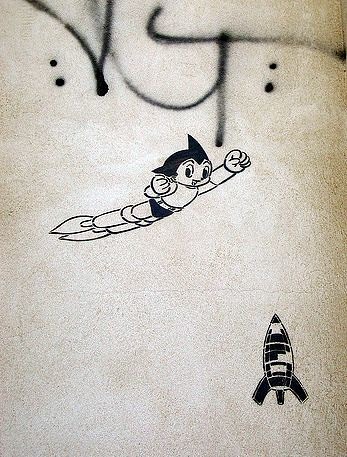 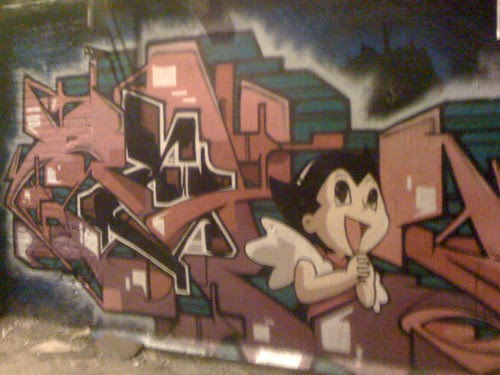 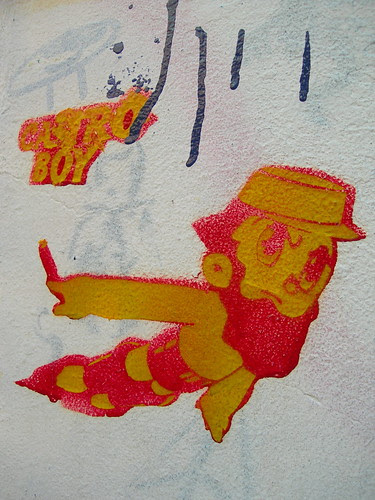 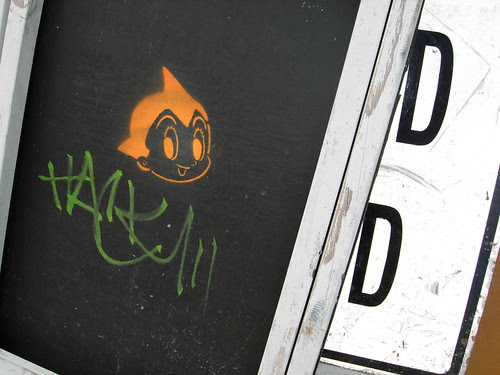 It goes without saying, the last one's pretty awesome.