Why Joseph Kahn is the Best Kept Secret in Hollywood

I've said before that I don't recommend movies, except for The Spanish Prisoner (1997, David Mamet), and I'm not going to contradict myself here. But when it comes to the one movie I freak out over it's Detention (2011, Joseph Kahn). I mean I can't describe it to someone without getting excited, overly animated, and thrilled that it was made. I love Detention so much. But I don't expect others to like it. I guess kind of like early Melvins.

Joseph Kahn's follow up to Detention is somewhat less schizo but it has a lot to say, is way more thought provoking, and just as fun.

But first another digression, remember the first time you realized that Vertigo (1958, Alfred Hitchcock) is like the only big Hollywood studio of the Golden Age that lets the villain walk away scot free? Or the first time you saw Happiness (1998, Todd Solondz) or Ichi the Killer (2001, Takashi Miike)? I do. And I was thrilled to find movies so dark. It takes an artist, a master even, to do it right.

It's sad that there are so many awful movies I hate that are just mean or ugly or involve violence or debauchery in the guise of entertainment or art or creativity. I am so picky, but I have my reasons. Such is the nature of personal taste. 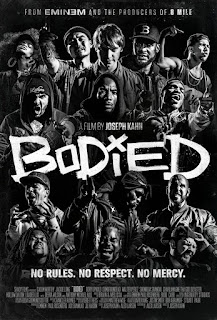 Bodied (2017, Kahn) is an article from a scientific journal thoroughly investigating political correctness.

All I knew going into it was that it's about a grad student who is writing a paper on rap battles. I don't know anything about rap battles and this movie didn't sound that appealing. But I was quickly won over. Bodied plunges the audience right into the middle of a rap battle in an abandoned warehouse and immediately establishes its tone.

Think of the first time you heard DAWSON and JOEY talking and got that feeling that their dialogue was obviously written by someone way older. Now imagine if that were sped up, and if a whole underground community of black rappers were thrown in who also speak in this same manner, only while simultaneously saying the most un-PC offensive things imaginable. And adding to this ADHD fun activity a heaping of pop-culture references. That's what Bodied feels like. And I love it.

Plus since this is Joseph Kahn, we get textual imagery. The first battle is introduced with on screen text that tells us the match is X-TRACT vs. BEHN GRYMM, and this is maybe one of the film's most characteristic devices because of how frequently it's used, but also in how many different ways. Kahn also still enjoys horizontal blue streak lens flares from practicals in the frame; his earthquake VFX; and a dynamic camera that has about as much trouble staying still as mischievous undisciplined child.

I was very curious to learn what kind of plot Bodied would have. I mean it can't just be filmed rap battles, right?

Bodied follows its protagonist, skinny white college kid ADAM, into his success and fame as the ultimate champion of rap battles. But while he gains the world and loses his soul, it is portrayed in a way that shows that might not necessarily be a bad thing.

Competing in rap battles takes Adam from a shy cowardly kid to a vile, racist, misogynist monster. But right as he transforms into Satan, the movie ends; on a seemingly uplifting, empowering note. And it's funny that these archetypes feel Old Testament and the main character's name is Adam. Maybe it's just a coincidence.

Bodied got me thinking a lot after I left the theatre last night. Mostly about what's offensive to others, and who's to say. And I was pleasurably humbled by watching a movie where so much of it went over my head or flew right past me. Also a lot of the references, pop culture or otherwise, were lost on me. And I would surely benefit from hearing much of the political discourse one more time.

So due to the limits of free speech being pushed, how much fun I had, and how intellectually stimulating and educational a comedy I found Bodied to be I think Joseph Kahn has crafted a major work of art here. And while I wish he would gain more fans, I can see his strong commitment to his own instincts as a factor in his niche appeal.
Posted by Dregs Erroneous at 12:42 PM No comments: