A Sega Nomad became a dear part of my life over the holidays. Yah, the battery life is as short as you've heard - abt 5 hrs w/ (six) alkalines, and although a disappointing 2 or so hours w/ NiMH rechargeables, well, at least they're rechargeable.1

Phantasy Star II's been getting the lion's share of play on the Nomad. This is contrary to what I've read in some places: that RPGs don't look great on the Nomad and are hard to read. I think it looks fantastic, and if you're having trouble reading it the screen on yr Nomad is either dying or something, or you need glasses.2 'Sides PSII, Sonic Spinball's gotten some semi-serious time, the big No. 2 is the recently acquired Shining Force[: Legacy of Great Intention].

Shining Force is a vintage tactical RPG, which I adore. Menu and item management are pretty minimal, but the story advances quickly and battles don't take more than the occasional 2nd try (so far). Beloved by me features also include:

(A) When Max, yr main character, dies in battle, the battle's over, which kinda sucks (the battle continues if other characters are slain), but the party doesn't lose any acquired experience (or gold, I think) from the failed attempt. This is why a 2nd attempt will mostly likely always succeed.
(B) All the members of the Shining Force are recruited in the town maps. This is not an entirely unique feature (you can do it 108 times in Suikoden, for example), but I must confess it is charming. Most refuse to join up at first, of course, then change their minds after an event or some such.

Anyways, I've been on the warpath in PSII, getting off that god-forsaken rock called Mota and finally reaching the alien world of Dezo, an experience which fills me with strange feelings. Wonder? Glee? Holy shit! Am I having FUN?!?

Having been hitting the Genesis collection so hard lately, my mind wandered to the old conundrum of my lack of Genesis games which come in cases. Great sites exist on the 'nets for downloading covers for yr Genesis (or SNES or NES) cartridges, but I was perpetually held up my the lack of the cases themselves. You can mail-order some, but they're kinda stupid expensive: like a buck per case, but plus 2 bucks S+H. Eff that. So the last time I'm at CDGameXchange, I look at the Genesis section and note 3 sports games, each w/ their case, for a buck each. "I just need the cases," I explain to the clerk as I throw down my ones and scurry out the door.

About 3-4 hours on the GIMP later, I can't stop looking at, or picking up and holding, these 2 beauties... 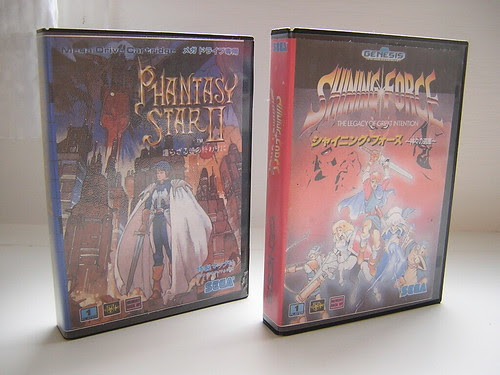 Of course, I had to make hybrid covers w/ the Japanese art on the front and the North American art on the spine and back.

From the angle that matters the most: the view when on the shelf... 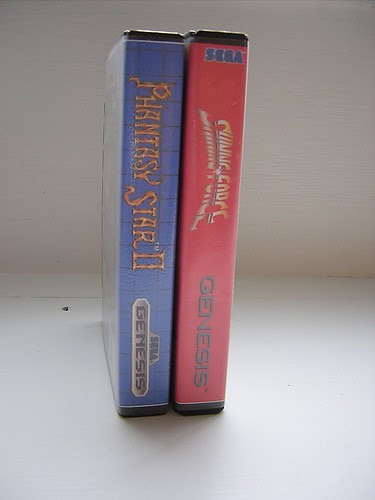 I really can't emphasize enough the smug satisfaction that comes w/ clicking yr copy of Shining Force into a colorful case designated as the case which holds Shining Force. Also, display as a concept and a reality, including the elements of design and set-up (what kind of shelf? what order? etc), is a critical distinction which sets any sort of hobbyist collection apart from mere archiving (a mere matter of semi-accessible storage).


1 However, I really need a different charger. Mine only holds 4 AAs at a time, and supposedly takes "overnight" to recharge. Which is true, if "overnight" is 24 hours. I need one of those 8-battery 45-60 minute powerhouses.
2 Besides, don't 16-bit graphics always look just a bit sharper when viewed on a tiny screen?
Posted by d.d. tinzeroes at 12:21 PM 2 comments:

Email ThisBlogThis!Share to TwitterShare to FacebookShare to Pinterest
Labels: boxart, collection vs archive, I have a problem, Nomad, Phantasy Star II, Shining Force

Fat got me a 'Cube for xmas. With a Gameboy Player.1

I never had a 'Cube before, so it was purty kewl. Especially w/ the Wavebird controller.

I've dinked around w/ some of my GBA games on the GBPlayer, but basically I went out and immediately got myself a copy of Animal Crossing.2

I don't claim to be a great "player" of Animal Crossing. Many places have been around longer than my pissant village of Ivon. Fuck, one resident (one of the chickens) has already left town. And I still can't consistently write letters anyone fuggin' understands!

But. BUT. I can design the hell out of patterns. I got on that right off the bat.

So it was pretty awesome to be wandering around the green the other day and find Pecan the squirrel, who seems to always have a "headache" in the morning, wearing my Dreamcast Swirl shirt! 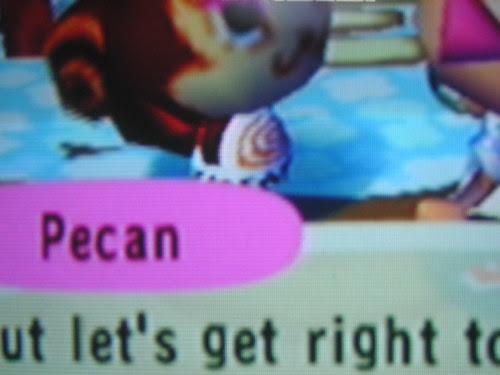 Then, I find not one, not 2, but three neighbors rockin' my Ms. Pac-Man shirt!!! Here's Dotty wearing 1 after a long night in my basement drinking JD & talking Blazers & Roy & Outlaw. 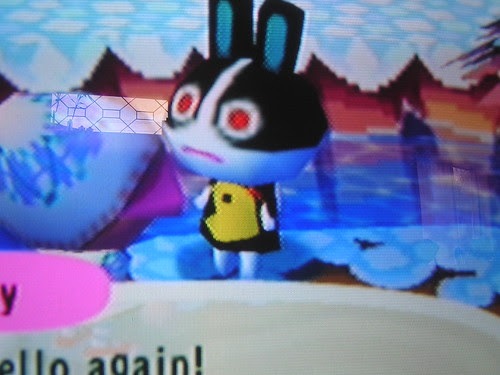 Nothing groundbreaking (the newer designs - those might be earth-shattering), but noteworthy on how we roll here at Reviewiera.


1 Just to make note, so it doesn't seem like he lavishes gifts on me w/ nothing in return, I got him a NeoGeo Pocket Color w/ 18 games for his birfday. Retro consoles & handhelds: the gifts that keep on giving.
2 In no small part due to this.
Posted by d.d. tinzeroes at 8:32 PM 2 comments: