The first three volumes of Akira are more than impressive artistically, both at face-value and as "sequential art" or whatever comic-lit-crit hot-button term you prefer, but they also comprise the main source material for the animated feature film (1988), so if you seen the movie, or, if you're like me and have watched the movie repeatedly, with religious attention and devotion (this would be about 1993-1995), then the first three volumes are not going to do a lot for you.  Rather, they read more like curio, as there's a constant meta-narrative at play in your head comparing the pages to their filmic counterparts, both in terms of accuracy as well as elements dropped from the film.

Its not until you transition into the final three volumes that Otomo gets his hooks in you.  The film, it turns out, only really covers the first half of this really, truly fantastic story.  Furthermore, the second half ramps up  Akira's radical sci-fi cred.  What starts as an excellent cyberpunkian conspiracy story about telekinetics (with a great melodramatic backdrop) shifts to a post-apocalyptic struggle of a demi-god's half-baked empire against black-ops spooks and telekinetic templars leading to a revolutionary twist ending (with a great melodramatic backdrop), complete with destruction writ large of Tokyo, an Olympic stadium, a U.S. carrier group, and the moon.  I read the first three volumes piecemeal over the course of a week or so.  I read the last three in one sitting in one night.

Furthermore, the Kaneda character, the clear protaganist in the film, takes on added depth in the manga.  It seems absurd at times but Kaneda's drive to stop Tetsuo has little to do with saving the city or stopping Tetsuo's sociopathic Imperial aspirations, but has everything to do with a sort of teen-gang violation of a code of honor.  Kaneda's use of a stolen special-ops laser rifle is one of the most memorable scenes from the film.  What's more memorable in the manga is Kaneda making no bones of setting out to simply beat Tetsuo with his own two fists.  The absurdity is of course that these attacks should be meaningless to Tetsuo by virtue of his telekinesis, yet there Kaneda stands before on the pages, surviving Tetsuo's wake of destruction again and again.  Kaneda's continuous horn-dog pursuit of Kai throughout the pages of the epic further underscore the degree to which this entire story might actually just be about teenage boys gaining the upperhand in what was originally an adult spook conspiracy.

Little surprise the film is as good as it is, seeing as its ink-and-paper basis is an exemplar of the form.

City of Saints and Madmen 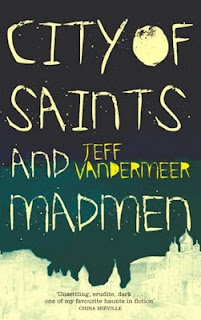 City of Saints and Madmen collects 16 novellas, short stories, phamphlets, adverts, guidebooks, and notes sharing the setting or subject matters of the merchant city of Ambergris (the most valuable part of a whale), including its festivals, its original inhabitants (a strange race called the Gray Caps, or Mushroom Dwellers), its history, the giant freshwater squid native to the River Moth, the Silence (a epochal event wherein 25,000 citizens vanished without a trace while the whaling fleet was out of port), the death of Voss Bender (the city's composer-dictator, kinda) and subsequent unrest, authors who insist Ambergris is a work of thier own fiction, the Hoegbottoms - the city's preeminient merchant family, and much and many more details regarding this Queen of Fantastical Cities for the reader's delight. Quite unfairly sets an impossibly high standard for the depiction of urban environments in a fantasy setting, and may well come assume a sort of biblical status in one's mind for the myriad ways in which the simple exploration of a place can be a sum experience using different styles, approaches, tone, voice, etc.

The collection starts wonderfully strong with the novella "Dradin, In Love" followed by an about-face in style with the novella-length phamphlet "The Hoegbottom Guide to the Early History of Ambergris." A third novella-length story, "The Transformation of Martin Lake," rounds out what I consider the three pillars of the book as a whole, the remaining short stories informing (and countering!) the novellas and the other stories. "The Strange Case of X" is a veiled auto-biographical novella by Vandermeer about writing about Ambergris and a fantastic valentine (and hate mail?) to the creative writing life.  Then follow 11 shorter pieces which approach Ambergreis from any which angle, concluding with a 71-page glossary.

As each story hits your reset button its easy to forget how much you enjoyed an earlier installment. As mentioned, "Dradin, In Love" is a great kickoff, giving you a first-person seat to the major elements of Ambergris: Albumuth Boulevard, the Religious Quarter and the Living Saints, the Mushroom Dwellers, the Festival of the Freshwater Squid, Hoegbottom & Sons, Ambergris' industrial past (this is one of many subtexts - the presence of great, derelict railyards littered with engines, and other allusions to a lost 'modern' era), but this followed up with the indepth background of "Early History" and by the time you finish the marvellous "Martin Lake" (regarding a painter and the passing of Voss Bender) you've forgotten how much you liked 'Dradin.'

You will leave City of Saints and Madmen with a ripe image of Ambergris' damp, muddled, dispicable-history-laden winding streets and dumpy, moldy buildings.  You will be left with lingering questions about the gray caps, the Silence, and the equally everpresent freshwater squid.  Its violent festivals and art-intwined-politics will leave you more than a little mystified.  But forever after the words "Albumuth Boulevard" will bring a smile to your face.

Required reading from a perspective of another-way-to-do-it, and from world-creation-101.  Highly recommended to anyone needing a shot in the arm of faith in the viability of fantasy.  Best if served with Mieville's Perdido Street Station and Swainston's The Year of Our War.

1 City of Saints and Madmen has enjoyed multiple printings under different publishers, the first few go-arounds seeing the addition of content.  This review is of the 2006 Bantam paperback editiion, considered the final edition.  The first edition was published in 2002 by Prime Books.
Posted by d.d. tinzeroes at 5:30 AM No comments:

Email ThisBlogThis!Share to TwitterShare to FacebookShare to Pinterest
Labels: awesomeness, bibliographic essay, hands are more than a way to interface with a controller, I blame Vandermeer, moreishness
Newer Posts Older Posts Home
Subscribe to: Posts (Atom)