FreeDarko's New Book Is the 801: It Is the Central Shaft

FreeDarko's New Book Is the 801: It Is the Central Shaft

0. By way of an introduction

Back when Reviewiera was a going concern, we loved us some pro basketball. Over the years, the Tinzeroes-hometown Blazers went from insane congeries to dull competence to injury-dominated semi-tragedy; a trajectory only sensical when plotted on axes of time advancing and relevance declining, as they now slot niftily into unfathomably stock narratives of opportunity equally missed and denied. I moved to Oakland, where the Warriors' appeal is that of miso: a thin soup that may nourish but will never satisfy. And yet, though I'm undeniably estranged from the league these days, and from the game herself, there is that with which I must contend, always: premierishly, FreeDarko: an collective. 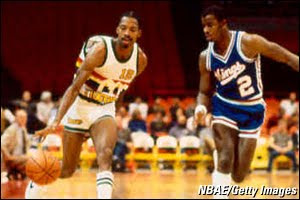 We've made no bones about that in the middle of the last decade, Bill Simmons and FreeDarko male-enhanced our NBAppreciative endeavours; indeed they seem twinned/entwined--though perhaps this is merely an artifact of (my) biography: one would churlishly negate any connect, the other, having fucking well won the war, modestly, modishly, shyly withdraws to the unassailable fortress (Mt. Critical Acclaim? only partly--mostly it's Mt. Fuck, We're Like a Lot Smarter Than This Guy) of the high ground. And yet I still have trouble reading one without the other. Often I want to call one punk, the other metal: Simmons:Metallica::FreeDarko:Nirvana, but this is likely inapt. Christgau/Bangs, perhaps, one airily contextual, issuing forth pronuncianatos, the other doubling back, changing position and revising claims, listening--always listening--and seeming actually interested in both the matter under discussion and the world as such. All this is oblique strategy (at best).

But the point: there's now room for both. That Simmons is now the de facto mainstream1 represents a real, and qualitative, change from before, say, 2001 or -2.3 Think of Hunter Thompson's off-the-cuff hit piece on sportswriting of the Grantland Rice school4, a school, that, when it comes to roundball, seems now without an exponent. Or anyways 'tis in eclipse.5 To come with a brutally apt pun: though Simmons is now the establishment, FreeDarko is at least thoroughly established.

A person could say

"saying 'we made it; we won' really amounts to saying the once-revolutionary FreeDarko maxims of (1) Liberated Fandom + (2) style/psychology have both become axioms (viz, of fandom)"

So now here's this book.

(I didn't read the first.) Partly I acquired it because, fuck, when one of your peers hits, you gotta support that shit. (YES I usually pay to see my friends' bands--call me an idiot if you will: I care not.) Partly as a look back as I walk (finally?) away from basketball.

It's a history, and it's a good one. If you're steeped in lore, it'll seem like a sherpa-guided trek through mainly peaks, high point after high point indicated, depths and valleys nodded allusively to but rarely penetrated. I claim I am steeped in lore. 1 year we moved and we knew we were moving again after that year, (so) I had/made no friends & would go afternoons to the downtown Reno library & read their entire shelf of basketball books, including, among the ones used by FreeDarko, Willis Reed's, Halberstam's epoch-defining The Breaks of the Game and the gave-me-a-chill-to-see-namechecked God, Man, and Basketball Jones--which I discovered only recently had Charly "Phil's Axes to Grind" Rosen's imprimatur.

Like any guide, The Undisputed Guide to Pro Basketball History will invariably occasionally baffle or infuriate a native. 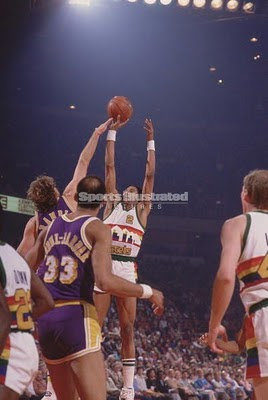 I devoured this book; this is not the proper approach. I think it will bear coming back to, will reward return(s). It's not quite a reference, neither a snapshot; it's just a book you come back to because it's heartening, and interesting.

Impressive but a little disappointing is the degree to which this is a real history, one which plays it straight. There's not a whole lot of the interpretive flights--Eric Hobsbawm on playbyplay, Fredric Jameson on color and a breathless, starfucking Pierre Bourdieu roaming the sidelines--that made FreeDarko's bones. Here they prove they can get the facts down, get "the" story straight; they play the game according to the (man's) rules, & argue by means of facts you've overlooked, not by more-compelling-than-yours subjectivisms in & of interpretation. & it's undeniable, the skill of their argumentation, the quality of their research. Some will want to quibble, saying "that's not what I'm here for, not what I expect from them" & I say noted, & perhaps not unreasonable, but--metaphor fail alert!--going electric didn't kill Dylan stagnancy is revolting.

These references and callbacks warm.

Particularly important is the quiet but firm insistence on the importance of racism in Oscar Robertson's life (and career). Particularly enjoyable is the sidelong debunking of the pernicious myth of the 'soft Euro'--this reader hopes that this wonderful Guest Lecture is included as an appendix in the second edition. Particularly inspiring is the accounting of Bill Russell: Robertson + Russell here would form an excellent supplement to Eyes on the Prize: it's real history, it's important, and it's done well.

On cocaine, the narrative is that by this powder was the league ravaged and rejected.

But this drug had a hold on the culture of the time, and again explicitly over the last couple years. Hell, even Simmons--property of Disney, remember--gets to let his mailbags have stories about doing blow. James Crumley said somewhere "the judges and the lawyers, they never gave up cocaine", so I'm not sure the league was threatened by much more than standard sportswriter punditry. One last note on this: the Phoenix Suns had a massive coke scandal in like 84 or 85--apparently Walter Davis rolled over on literally half the team--and that's a story I'd like to see told somewhere, with a larger-scale examination of the actuals of coke in NBAmerica...

The collective bargaining agreement (CBA) discussion (104-9), while sober and detailed, would benefit muchly from context. The following sentence makes a union man like me Deeply Upset:

And the discussion of the "equitable NBA trade" that's used to illustrate the CBA manifests little power for a reader who knows that: Which is all to say that the NBA's business practices demand some interrogation; this is not FreeDarko's favorite mode of analysis; I wish it were.

One must note the production values. As an artifact, this is an attractive and thoroughly appealing book. I know the corners will one day crumble, the pages crease; soil is always everywhere and nothing good can stay, but out of the box? this is a triumph. The art is lovely. I wonder if it will date. I have no clear idea. The Knicks and Celtics pieces are both quite wittily observed and executed; the ABA poster I would put on my wall.

I note one large wish. A few times, there are lengthy--and, yes, clear--references to photographs that do not appear. While their descriptive gifts and ekphrastic skills are undeniable, some of these passages left me desperate to turn the page and see the image.

The graphical displays of information I have given short shrift here: I will be working with those for quite some time; they are magnificent, and valuably high-content. A small wish. Wish there had been one chart of the rise and preponderance of the 3-pointer, perhaps with a small explication of "true shooting percentage" (going 2-6 from 3-point-land = 3-6 from two = 1-6 + 4-4 [from the line]).

The book isn't authoritative--more a quiet off-campus one-on-one with your favorite professor than a lecture--but it's so gravely assured that the occasional misstep or mistake8 hits hard: more than a distraction, each one seems to founder the whole project, or threaten to--this, the peril of playing history straight. But really, these are easily forgiven, as the book, and indeed the entire FreeDarko enterprise, are so intelligent, earnestly playful, warm-hearted and fine-spirited.9 Just some smart boys men realizing (in the sense of making real) that some kinds of dumb fun can actually be smart fun. Or, to use their words, the men's,

The NBA is a far more interesting place when we also take the time to both note these similarities and be accurate about their differences. (132)

This booki is the Spurs, taking a challengej and beating itj on itsj own terms by being exactly what what iti is in the right way for that circumstance. & if that--beating somebody, their way, at their own game, by bringing yourself maximally to bear--isn't one kind of greatness, then what the fuck is?

I took myself down to a local bookstore and paid full retail for this book: you should do the same.

Notes:
1At the same time, both FreeDarko and Voice of the Mouse Ric [sic] Bucher (on Simmons' worst podcast since his last bad one) anointed Contradiction-favorite Monta Ellis a "sublime" and "unique" (respectively) and a must-watch. Well...duh: people who like basketball have to like Monta Ellis; and yet I claim it is a modern affectation of weakness development that supreme talents on off-the-radar rosters relegated to the second rank of the standings are non-condescendingly celebrated.2

3I first heard of him when college buddy fellow traveller Day Sleeper Erin P. forwarded me "Basebrawl Fever--Catch It!". I think, actually, she may have printed it out and put it on my desk. Selah.

4A school now represented only by Sports Illustrated's redoubtable in that I doubt him every time he opens his mouth corny but not ineffective Michael Farber (nee Dickie Dunn), who truly captures the spirit of the thing. I actually like his het-up prose, and failed in an attempt to channel it t'other day.

5Some possibility "school in eclipse" is not my load-bearingest metaphor.

6Why I remembered this excellent article as by Simmons I will never know.

7My shoulder'd hurt with the effort required to type "they think of me" save for the one time I done got namechecked--after a dick move, natch. (Let me say publicly now that I regret the dickishness of my presentation there while sticking with the argument I was advancing.)

8A few mistakes, cataloged:
"strength" spelt wrong (111)
claiming Robert Horry checked Steve Nash into the scorer's table here (191) and that 'twas Bruce Bowen here (204)
The man was hardly always "World B. Free" (101)--he began Lloyd Free, went for the bog-standard brag "Lloyd 'All-World' Free", and only after that made the move to call for universal liberation.