The Dream of the 90s Is Still Alive

Michael Bay makes big American movies. Is this the first time he's made a movie that didn't cost over $100 million? 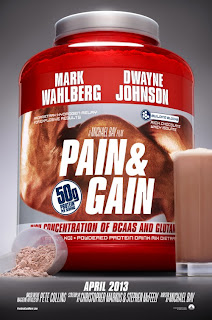 Pain & Gain (2013, Michael Bay) is an action-packed morality tale about the consequences of using crime to attain the American dream. The protagonist, Daniel (Mark Wahlberg), is a victim of the early 1990s pop culture wasteland who foolishly recruits two other stooges to take on Miami as if he were Scarface. The layers of pop culture self-reference stack high, beginning with Marky Mark himself heading the ensemble.

But what Bay handles best is borrowing seemingly doofus drips from twenty years ago and finding that they are perfectly interchangeable with Americans today.

The dregs of mainstream society on display here are the same characters used ironically to entertain in Spring Breakers (2012, Harmony Korine). Image-obsessed, mass market cultured consumers with an amoral understanding of violence and laws really know how to run amok this summer. But, Bay's anything but pretentious. He drives the story and knows how to deliver high octane escalating conflict that adheres to the wham o meter.

People aren't so much beautiful in Pain & Gain as they are idealized conceptions of cool American symbols; so, mostly beefcakes and strippers. Miami looks like a music video or million dollar commercial. Bay uses a mix of film and video capturing evocative images within his vast canvas that never becomes static. The Digital Domain people must have had something to do with the many slo-mo shots: something like 1,000 frames per second and often projectile spittle that floats in air.

Plot wise, this comedy of errors keeps getting unbelievably worse. And, I think that as an American, I was kind of proud that we're such a big obnoxious badass of a country, but also glad that I could point my finger at all the people in this movie and say hey, "at least I don't have it as bad as they do."

Ed Harris is fun though too, cast on-type.

I really think the theme of this movie coalesced, unlike any other Michael Bay movie I've ever seen. Or, not so much the theme, but the way the visual representation of this simple true crime tale makes it so tangible. It's like looking up close at the ugliest, sexiest, balance of American culture.

I think the line in the movie went something like: "America started as thirteen scrawny colonies, but now it's the buffest nation in the world." Tongue in cheek, Bay's commitment to action earned my respect today. I don't know how long my admiration for him can hold up, but every once in a while, I always know who I go to when I want to see the biggest, loudest, simplest forms of entertainment Hollywood has to offer.

--Dregs
Posted by Dregs Erroneous at 4:49 PM No comments: