The cult of David Fincher as auteur probably share diverse notions as to what his draw is. Perhaps foremost among them is his reputation for being a methodical, calculating perfectionist and demanding exorbitant amounts of takes in much of the same manner Kubrick is known for. Additionally, his work is often characterized by scenes showing a surgical precision exacted in getting deep into the viscera of the audience. But, on a more subtle level, the guy is uncanny when it comes to the focus he preserves throughout his vision, considering how large the scale of his work often is and how varied his source material has been. 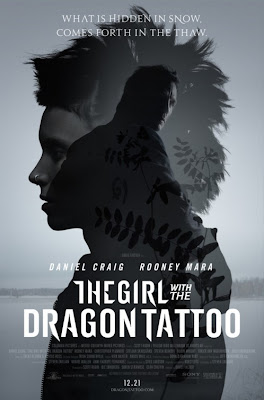 The Girl with the Dragon Tattoo (2011, Fincher) is only disappointing because the franchise it's based on is a series of international best selling novels. I get apprehensive about any movie that is poised to open across the world; you know, the big ones. Because in the end, mass market entertainment kind of has to be diluted, once it is served in such a large quantity.

Why does The Girl with the Dragon Tattoo work in Fincher's hands? Because he exceeds when it comes to this antiseptic, dark, cold Scandinavian milieu. The design of this film comes across as almost high tech in a sense. It just feels so modern. The barren landscape is complimented by desolate production design. I still feel the cold from that house--someone let that cat in!

In addition to the production design and art direction, Atticus Ross and Trent Reznor again contribute to the soundtrack with post industrial electronic ambient soundscape type percussion that further advances on the styles they'd experimented with for The Social Network (2010, Fincher). These elements are also crucial to the Fincher touch.

The plot is banal and bores me.

The timeless, exquisite beauty of Rooney Mara is supported by her talent to deliver a convincing performance as Lisbeth Salander--the emotional core of this movie and the primary reason Fincher has captured my adoration here. This girl is modern in the sense that she epitomizes the counter culture of her generation. In the 50s, JDs wore leather jackets, white tee shirts, greased back hair, smoked cigarettes and rode motorcycles--this is Lisbeth's lineage--and in The Girl with the Dragon Tattoo, the self-imposed Hollywood cigarette boycott is clearly flouted. So in a sense, Lisbeth seems like a return to the sure footing of the 50s, as opposed to the chaos and divergent cultural identities that marked, say, the late 60s. Or, should I say, she's a classic rebel, lacking political pretense. And who's she pine over? Who does any upwardly mobile Greaser go for? A Soc!

The denouement is more sugary than it was undoubtedly intended. She's supposed to be scarred, but it just feels like a small bruise. Nevertheless, I identify with, empathize with and root with her for the whole two and a half hours she's up there.

This is too black and white, good guy vs. bad guy for me. But, I'll admit, seeing a rapist get his comeuppance still generates that special brand of catharsis that hits me on the most rudimentary level. The bloodlust that comes with the urge for revenge against anyone who has harmed innocent women or children is one of the instances I'm most vulnerable to being manipulated when I watch films: and that in itself is an entirely different matter to delve into--I just know I try to keep an eye on that. For me though, it's almost a little like Fincher's talent is wasted on this kind of thing--he can usually find plot points that appear more unexpected.

I think his insight into the minutia of historical tabloid operas is his greatest strength. Don't get me wrong though: since Zodiac (2007, Fincher), I find all of David Fincher's movies endlessly rewarding. For me, he's the best working director in the business (uh-oh, superlative praise? I think it's warranted here).

Posted by Dregs Erroneous at 10:31 AM No comments:

What If Salt Wasn't a Cartoon?

With another low end mid sized budget, Haywire (2012) is Steven Soderbergh's latest foray into serving two masters at the box office. The movie appeals to those who will be entertained watching Mallory Kane (Gina Carano) running and getting into hand to hand combat, in no less than five sequences, spanning the entire duration of this whopping ninety minute powder keg; and, it similarly holds a draw for those entertained by watching the conspiratorial intricacies of the ensemble unfold, at an explosive pace, before diving back into themselves for somewhat of a coda. 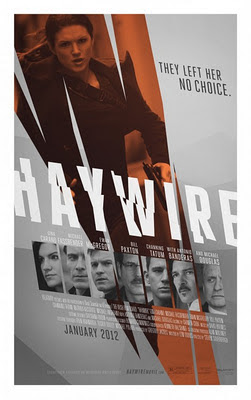 Late in the film, there's a scene where Michal Douglas plays a high ranking government official who makes comments effectively pathologizing the type of personality Mallory Kane has, which in a way represents the two halves of the audience and how they need each other. He says he knows how it must feel for her to run around, always looking over your shoulder, and how she needs that rush. So, he's admitting that he's exploiting her and that he knows exactly how to do so.

However, it may be unfortunate that there just isn't enough time to connect with any of these characters on any significant level. Moreover, all of the events depicted in the film occur in only eight days. But this unfortunate characteristic distills the very nature of Mallory Kane: she doesn't have time for any of this either, due to the nature of her lifestyle. We're made to feel what it's like to be swept up in her roller coaster of an existence--one second running, the next chasing, constantly.

Most of the film's urban locations are complimented with what sounds like 70s Blacksploitation funk-fused chase tunes. The music never felt intrusive or like it suffered from caricaturing the lead protagonist, which could easily have been the case because of the fantastically high stakes this young woman must negotiate. If however, that sort of thing is your bag, Salt (2010, Phillip Noyce) is nothing short of an absurdist cartoon of the female spy on the run plot. I enjoy Salt, but the difference with Haywire is that I actually think while enjoying it, and can buy into the story.

The cinematography wasn't as expressionistic as Contagion (2011, Soderbergh), which is interesting because it shows Soderbergh's restraint. Or, what I'm trying to say is he could have gone a lot bigger and louder with this, but I like the understated approach. He's still managed to film in predominately daylight (overly blue) or tungsten (overly orange, or yellow) settings, to provide some added dimension to the locations dramatically. And the black and white shots from the mission to rescue Jiang are employed nicely, to distinguish this single narrative thread from a total of three concurrently played out onscreen, ending with all three threads converging in black and white. On the technical side though, the dolly shots tracking Mallory running through the Barcelona back alleys are marvelously fluid and alive with open air realism.

The editing of Mallory's part in the Barcelona mission is so quick and effective. Soderbergh and Stephen Mirrione are able to achieve such precision that it's almost something I take for granted. With Haywire, I wasn't disappointed.