Steven Soderbergh says he is retiring from making movies. If so, he's gone out in peak fashion. 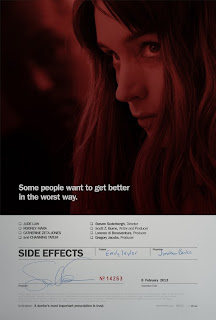 The best thing going for Side Effects (2013, Steven Soderbergh) is Scott Z. Burns's whip-smart script. Burns proves to have mastered a delicate balance between positive and negative charged genre blending; yet, the protagonist and antagonist are also balanced along a similar +/- structure; and, this foundation is a very strong mix in the hands of Soderbergh.

Rooney Mara plays Emily Taylor, a mousy, modestly-attired social climber sociopath who freely and carelessly manipulates state and government institutions both legal and medical, deviously and deceptively plying her lethal black widow schemes in service of her own survival. Emily murders her husband and lies her way out of it like a pro. This cynical modern epic crime narrative is the negative charge.

Jude Law plays Dr. Jonathan Banks, an upper-class professional who earnestly tries to treat Emily, a young woman suffering from clinical depression. This is the medical drama narrative that initially cloaks the crime plot. But, ultimately it returns. By the end of the film, Banks or Emily wins--but, that doesn't mean that this hybrid settles on taking sides; because, both are so well balanced.

This is one of the rare instances of the protagonist being all bad (Emily) and the antagonist being all good (Banks).  Furthermore, the reason the hybrid genre characteristic is worth commenting on is because this isn't a twist at the end of the second act--Emily revealed as a faker--due to the fact that Emily may or may not actually be a victim of circumstances and depression and misdiagnoses, as she's initially introduced to be. In a disturbingly modern way, Rooney Mara looks realistically like one of those recent young cute female murderers who the cable tabloid news networks saturate the media with.

Mara's performance is the other standout of the film. She's now part of some kind of elite group, having now worked with David Fincher, Steven Soderbergh and Terrence Malick. Those three have been the top-rank Hollywood big-budget, quality filmmaking triumvirate for the past decade and a half. We get a lot of Rooney Mara and Side Effects is a vehicle for her brooding explosive sculptured cypher of beauty. And she screams a might deal fierce, which is still unsettling.

Soderbergh is on his best behavior camera wise. It's like one of the most subdued films he's delivered in the past twenty years--probably somewhere between The Girlfriend Experience (2009) and The Informant! (2009). But his stylized interiors, with the fluttery business of artificial lighting in NYC, and subtle variants within warm and cool sources, are impressively and carefully crafted.

Side Effects lacks an emotional punch. But, Soderbergh, in only 100 minutes, puts us in an emotional choke hold, and keeps us there. The moral is a cautionary tale about what can happen when a common everyday anybody can try to get away with crime at some of the highest stakes imaginable; and this target's success is that it's been brought to the screen in a compact, efficiently executed, sleek and right out of yesterday's headlines panache by Soderbergh, entrenched in his own style, as it should be.

--Dregs
Posted by Dregs Erroneous at 2:29 PM No comments: