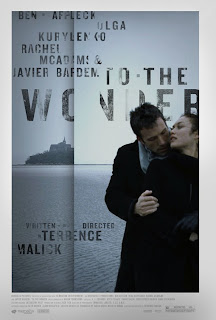 Like Gatsby, To the Wonder (2012, Terrence Malick) sucks because its dramatic stakes eventually amount to nothing more than the fact that among a triangle of ridiculously beautiful mannequins, infidelity occurs for a slight moment, yet they all go on the same as they were when first introduced.

The difference with Malick though, is that he is showing us the limits of people and how unlimited the beauty of nature is, whereas Gatsby thinks it's showing us how unlimited the capacity for people to party and fall in love is, and ignores nature in favor of booze, baubles, and Babylon.

Although, while Malick's visual bravura is breathtaking, it is reducible to wide angle Steadicam subjective roving gliding movements mostly through nature, with some shots of beautiful people looking off into the distance, and a random menagerie of North American wildlife.

To the Wonder is unusually lacking in plot structured through dramatic turns; very much like The Tree of Life (2011, Malick). And, for a Malick film, it doesn't have as many attention pulling symphonic score excerpts. But, this new mini-Malick is like seeing Werckmeister Harmonies after you've already seen Satantango. It's like listening to a new 7" of your favorite band. And I think Malick is editing three more movies he's already shot, so I think To the Wonder will definitely be re-evaluated by many viewers after those films have been released.

To the Wonder feels like 60s Bresson with less plot.

Olga Kurylenko and Bartlesville, Oklahoma are the subject of Malick's gaze. And, having spent the latter years of my high school days very close to this area, I am impressed by the natural grotesque local flavor that shows up in the film--mostly through extras casting. Kurylenko is in a Sirkian woman's picture: she has love and a house to keep, but what the fuck can she do in Hicksville with no stimulus or fulfillment?

Sea turtles and a field of buffalo are among the cute critters Malick photographs in To the Wonder. I wish I could have delved in depth more critically, but at least I've been able to start.

Posted by Dregs Erroneous at 10:21 AM No comments: