Kind of a rough year for movies! After 2018's roundup, which was overstuffed with mediocre (at best) thrillers, I thought I had crafted a firm thought for 2019, a thought to seek out Better Movies. The list below does not visibly reflect that. Nearly 150 movie-like objects over the course of 2019, including coherent seasons of TV (The OA [RIP], etc.), but one would have preferred more better.

In general, I watched too much TV (like everybody) (although Legends of Tomorrow is a really good show), did too much rewatching (not entirely sure I needed to rewatch the entire Resident Evil series), too much rewatching TV (Simpsons and Letterkenny ate too much of my time this year), and so on. We did okay finding decent older movies, though we've had Nashville on the list for like two years now.

Order within categories is mostly chronological in order of seeing it. Best theater experiences: The Favourite, Us, Midsommar, Last Black Man in San Francisco, Parasite and The Lighthouse. Best first watchings of older stuff: Stick It, Fatal Attraction, Short Cuts (maybe: this one really left me cold), Cabaret, Metropolitan, King of Comedy, Candyman and Rosemary's Baby. Also some good home watches of more or less new stuff: Blindspotting, Clouds of Sils Maria, Destroyer, Her Smell (first two-thirds, anyway), and Rolling Thunder Revue were probably the best of these. Special mention in the category of You Will Like This If You Like This Sort of Thing goes to Escape Room, which was better than it had any right to be, and Ready or Not, which stole the thunder from Knives Out for me. Hale County was also great, but probably everybody has seen that already. High Life I need to see again.

Also somewhere in there I saw Us, but forgot to write it down? Weird year.


Those are all pretty solid! I should go to the movies more. Because only rarely do you see something like ...


VI. Some Ways I Passed Some Time 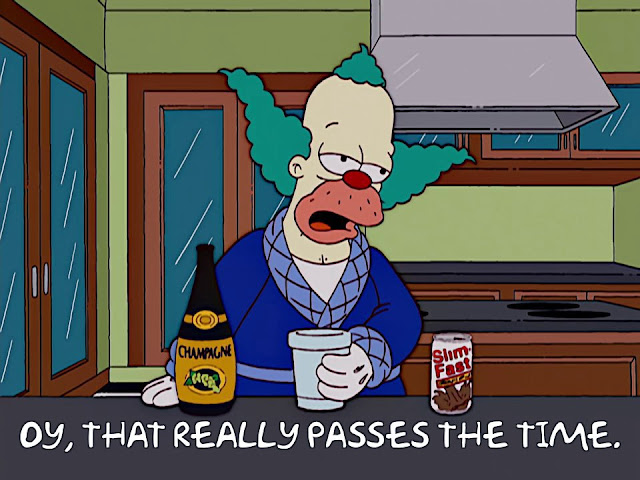 Email ThisBlogThis!Share to TwitterShare to FacebookShare to Pinterest
Labels: movies

When a good pen comes around
You must clic it!
—Fat, after Devo

Two things. One: In New Orleans last year, a hotel we stayed in gave me a branded Bic Clic pen. I naturally yoinked it, and over a couple of days used it, and actually loved it. I thought it would make a good promotional item for the podcast, so I ordered a bunch, and if you would like a couple, drop me a line (cfcollision @ google's mail service, dontcha know) and I'll mail you some. They really are good pens. 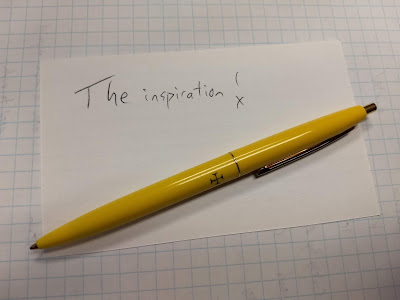 (Impossible to look at one of these and not pop a bit of a smile. Ah, lil' Bic Clic, you're the inspiration! )

Two: Using both the freebie and one from my big batch, I have come to realize how spectacularly and unequivocally superior Bic's ballpoint pen ink is to Zebra's ink, which I have previously given at least some praise to. There really is no comparison. I sill like my Zebra okay, but the skipping and blobbing is intensely noticeable versus the Bic ink. Accept, I guess, no substitute! 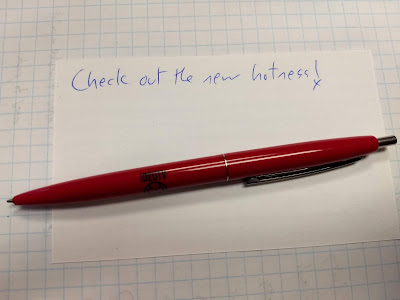 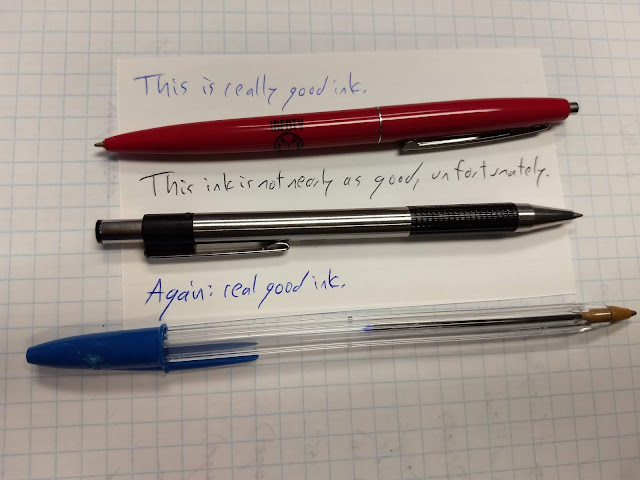 (Ink fight! These are scribblings on your average el cheapo index card, but, I assure you, the results are quite typical and repeatable.)

—Fat, who will never need to buy another pen.

More Great Urinals (of the Pacific Northwest) (And Toilets, Too!)

For some years now, our own redoubtable Tinzeroes has devoted himself to the documentation of our great land's more notable stand-up pissoirs, as one can review, thus.

Thus it was my foundations were rocked by a care package from a Vancouver-based podcast listener who sent along not only a Canadian-flag pin (which rode my bike bag all through Paris last year) but also some cool records and a couple old free weeklies, which ... contained ... the following: Vanpooper: rating the best (and worst) of Vancouver's public toilets by Michelle Hanley. 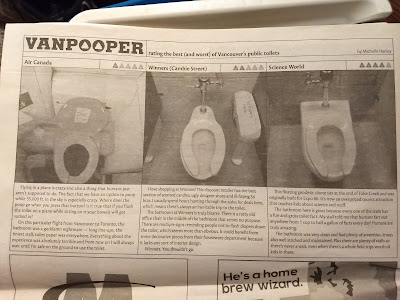 Beneath this paragraph are more zoomed-in pictures, in case you want to do deeper into these great toilets. (And beneath the waves, an ocean!) 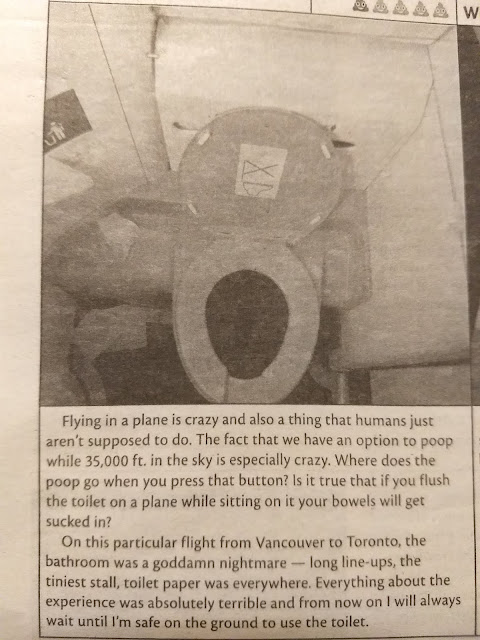 (Honestly for an airplane bathroom this one doesn't look that bad.) 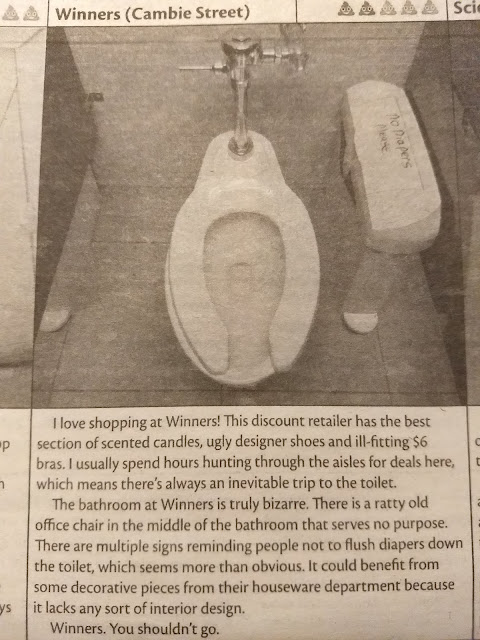 (Non-flushing chairs in bathrooms always exude a powerful and frightening energy. But I'm heartened to see a place of business with an actual open-to-the-public facility. Living in the East Bay and occasionally visiting San Francisco, I'm more familiar with the brutal and inhumane practice of not allowing customers or others have a clean private place to excrete.) 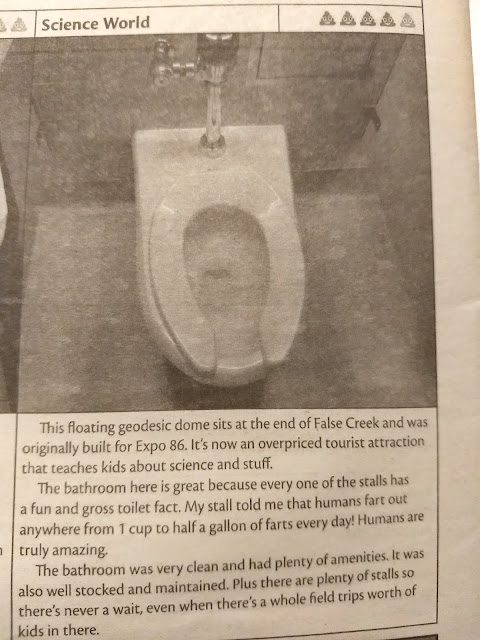 (False Creek? That's a name that makes me want to know a story! Obligatory link to Expo '86.)
Posted by Fat Contradiction at 1:44 PM No comments:

Email ThisBlogThis!Share to TwitterShare to FacebookShare to Pinterest
Labels: Great Urinals of the Pacific Northwest, The Mysterious Ways of Revieweria

Reflections in a Golden Eye

Kill Bill: Vol. 1 (2003, Quentin Tarantino) generated a treasure hunt for finding the sources of its many references upon its theatrical release; Battle Royale (2000, Kinji Fukasaku) being the one most applicable to the point I’m about to make. But around this same period I became aware of Takashi Miike, and subsequently sought out as many of his movies as I could find—from boutique dvd boxset releases to illegal bootlegs. Yet adding to both of these occurrences this same period also happened to coincide with a new trend in cinema, the subgenre that gained popularity known as “J-Horror.” I’m saying 2003 was the year I watched more Japanese movies than American.
It wasn’t long after that it seemed other than Ring (1998, Hideo Nakata), Audition (1999, Takashi Miike) and Ju-On: The Grudge (2002, Takashi Shimizu), there wasn’t really enough quality to support all the hype around J-Horror (or, at least nowhere near as much as 70s Italian horror). But Cure (1997, Kiyoshi Kurosawa), Pulse (2001, Kurosawa), and Dark Water (2002, Nakata) are really good.

This brings me back to my ongoing introspection about why exactly I love certain “bad” movies. It’s not just to be provocative or offend sensibilities or for gratuitous shock value, as my friends have sometimes accused me of—which is fun I’ll admit—going back to when I wrote my first top ten list and included The Canyons (2013, Paul Schrader). All taste is is expressing your likes and dislikes and being able to support your opinions right? Anyway, I remember a time when I never would have believed that an American remake of a foreign masterpiece could improve upon it or be better. That is, until I found M (1951, Joseph Losey).
The Ring (2002, Gore Verbinski) is my favorite horror movie. And if I were to watch Suspiria right now I’d go for the Guadagnino over the Argento. And Sam Raimi and Rob Tapert’s newest installment in The Grudge franchise just may be one of the best horror movies I’ve ever seen. 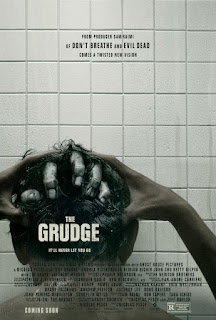 WHEN SOMEONE DIES IN THE GRIP OF A POWERFUL RAGE… A CURSE IS BORN.

THE CURSE GATHERS IN THAT PLACE OF DEATH.

THOSE WHO ENCOUNTER IT WILL BE CONSUMED BY ITS FURY.

The Grudge (2020, Nicolas Pesce) is a reboot of the American remake franchise with a story that begins with the same traumatic death in the same house in Japan as The Grudge (2004, Takashi Shimizu), yet avoids nearly any mention of any of the secondary characters or events from the previous installments.
For the rest of this post when I describe The Grudge, I’m referring to the 2020 release. The Grudge succeeds as a reboot for, among other reasons, setting itself apart from its predecessors by being darker. Its tone is sorrowful and established at the outset. Its characters suffer loss. They smoke. They drink. They’re desperate. In an unnamed town, despair engulfs the dramaturgy.

The atmosphere of The Grudge becomes most apparent at night. This isn’t to say bad things don’t happen during the day, but at night the color is light through a straw filter; and this golden netherworld of nocturnal terror starts with sodium-vapor streetlights, then follows its characters indoors. Furthermore, these scenes invariably isolate the various characters. Alone, they find themselves apart from their loved ones, trapped in darkness and silence.
And what enhances the proceedings most of all is the film’s cast. Anchored by a lead performance from Andrea Riseborough, who’s legitimately earned her clout in the horror genre after Mandy (2018, Panos Cosmatos), her physical appearance immediately distances the tone of The Grudge from its earlier incarnation. Whereas Sarah Michelle Gellar is probably the perfect balance of cute and sexy, Riseborough’s no make-up/no frills counter is the perfect balance of tough and emotionally-tortured. The ensemble of The Grudge includes: Demián Bechir (always glad to see a Mexican in a horror movie), Jacki Weaver, John Cho, Frankie Faison, William Sadler, and a memorably unnerving Lin Shaye. When’s the last time a really scary horror movie had a cast this good?

I really love the narrative structuring of The Grudge. Its scares are more subtly placed, and there’s way less exposition. From the start, we move forward while simultaneously going back and tracing the steps that got us to where we are; so, parallel timelines running concurrently. And maybe what I dig most is that The Grudge never bothers with the why any of these murders occurred. That’s what truly made it scary for me. Now in comparison the whole oh that’s why the husband murdered Kayako and Toshio, we can solve the curse from the all the other movies is completely absent. That’s what most impressed me about the modifications in The Grudge, the attention and understanding of the horror genre—specifically, the lack of explanation, of closure, of hope.

In closing I’ll add that this is the first film in The Grudge franchise to be rated R. And it is way gorier than I’d expected, disturbingly so. Like 80s Fulci gory. This isn’t the kind of stuff normally found in J-Horror. Oh how well executed the scene is with Jacki Weaver’s character wandering aimlessly into the meat section in the supermarket, as flies are heard, seen, the condition of the meat, the bizarre looking man at the counter.


Is The Grudge too excessive? Yes. I felt gross. It crossed a line. But I like it. There’s another great scene where Frankie Faison’s character attempts to reconcile with the curse, understand it, accept it, find hope, the music swells, uplifts us… then Weaver’s therapist zips up a handbag or suitcase, some piece of luggage, and abruptly this zip violently cuts the sentimental music off short from the soundtrack. Exactly.

Posted by Dregs Erroneous at 2:05 PM No comments: