Take You Down to the Dirt Drag You Through the Mud

Japón (2002, Carlos Reygadas) heralded the debut of the twenty-first century’s second new talent in world cinema (the first has to be Apichatpong Weerasethakul.) Who else for that matter has joined those ranks since? Steve McQueen? One might add Yorgos Lanthimos, although I'm not yet a fan. Japón is also primitive, authentic, fringe, and something else altogether rare in cinema, Mexican. I’ve read Reygadas’s follow up was met with disappointment, but cannot see why. I love Battle in Heaven (2005, Reygadas). Silent Light (2007, Reygadas) and Post Tenebras Lux (2012, Reygadas) yield the satisfaction of why some directors should be followed. 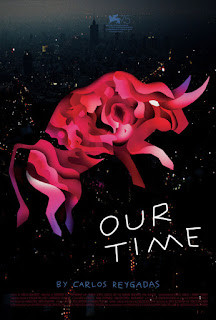 But Reygadas latest has left me resigned to any hope of his further sustainability. Guess that leaves Joseph Kahn as the only filmmaker to emerge in the new millennium who I still have hope in.

Our Time (2018, Reygadas) opens with a shot of children playing in the mud, in a location drawing a pastoral aesthetic familiar to most of the director’s other work. But then it turns into a movie about a jealous husband spying on his wife’s texts at which point I lost all interest. Oh and the husband is played by Carlos Reygadas. Like Bresson, prior to Our Time Reygadas understood the power of silence in his art, but not anymore. The Reygadas character is a boring middle aged whiner that makes this movie unbearable—and this complaint is coming from someone whose favorite director is Woody Allen.

There’s a subplot in Our Time about a bull fatally gorging one of the ranch hands. The other cowboys try to track the bull down to put him down, but never find it. Then at the end we see the bull fall off a precipice to its death. The shot is obviously CGI, and while I’m in no way condoning animal cruelty, this comes off as a symbol of the compromises to be found all over the movie that amount to so many diminishing returns, and the death of the wild nature that used to make Reygadas's movies so captivating. Japón infamously features shots of animal cruelty; Battle in Heaven has sexually explicit shots that involve blow jobs and nude fat Mexicans; but now, a smartphone with texts that reveal an affair.

Also, Silent Light beautifully already explored infidelity in a marriage. Which just makes me wonder even more what if anything is the point of Our Time?
Posted by Dregs Erroneous at 7:26 AM No comments:

Bone Hoard of the Dancing Horror 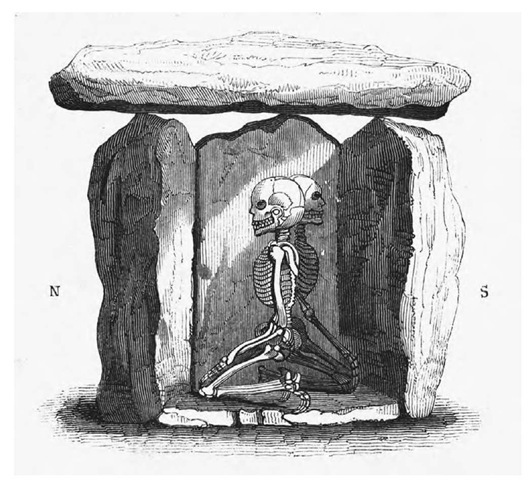 This is another Dungeon Crawl Classics module I ran for son for his Wilderlands solo-campaign based in the city of Tarantis.  I hooked it by saying the magic user studied scrolls and notes taken from the previous dungeon and claimed he could deduce the location of a lost chaotic temple (yay!) not far from the city.  The party purchased supplies to outfit the expedition and made about a five day trek overland due south to the Brath Woods (including building raft to cross the Trollraun river).  They knew which five-mile hex in which to search for the entrance to the dungeon but I required a "1" on a 1d6 to find it – they got lucky and found it on the first day!


Like other DCC modules this does not feature "regular" monsters.  In this module (please note this review includes spoilers), the chaotic legacy of this former temple, combined with the experiments of a neutral wizard who wanted to forge an anti-chaotic sword (the "Fellblade of Dellsparro"), has resulted in (a) a weird fluid that will make your bones and flesh meld together, (b) rats with no skeletons that attack you like flopping, leaping leeches, (c) the titular giant "insect like" creature, which makes piping noises out of its back and wants to draw the skeletons out of the characters bodies, (d) a 80-foot centipede abomination made entirely out of bones, and (e) little six-inch tin warriors who try to kill you.  The dice rolls all basically went the party's way, but not without one character almost getting her skeleton drawn out, and another losing a point of Constitution due to the weird fluid, and another getting impaled by the bone centipede.  But they got the Fellblade and plenty of loot (although they missed some magic items, either by not finding a secret room or simply not realizing some items were worth taking).


On the way back, a day out of Tarantis, they were confronted by ten bandits, to which my son jumped for joy!  These opponents?  He knew all about these opponents – no weirdness this time!  Sure enough, the party made quickmeal of the bandits.  The entire party is now a mix of 2nd and 3rd levels.


This concluded a two day period where we played "D&D" almost exclusively throughout the day.  We completed Well of the Worms on a Friday and this adventure on a Saturday. 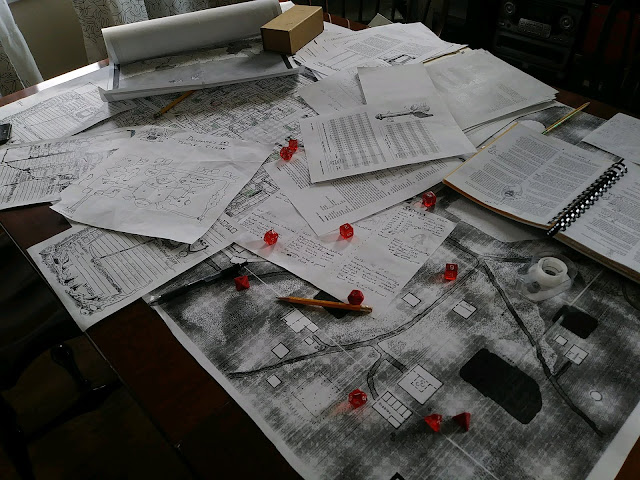 The Adventurers in this session were:

Well of the Worms 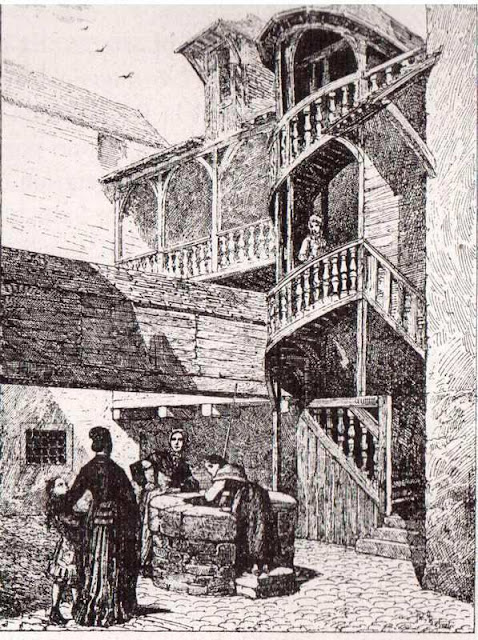 This is a Dungeon Crawl Classics module which I ran for my son, in what is now collectively the third in-house campaign underway.  Inspired by a post I read elsewhere, I printed my map of the city of Tarantis on multiple 11"x17" pages and taped the whole thing together into table-sized map, and based this new party (3 characters plus 3 semi-non-player characters) at the Blue Moon Inn near the harbor.  My feeling was that the visual aid of a table-sized map would viscerally bring the experience of a city-based setting to life in a way mere words or a handout-sized map could not.


The module had some various hooks but I simply opted to locate the titular well out in the alleyway behind the Inn, and to have everyone awoken in the middle of the night by the news of the murder of the family residing in the house next door to the Inn.  And so down the well the party went!  This dungeon is actually pretty linear (please note this review includes spoilers), with actually very little combat against just a handful of monsters.  However, it greatly makes up for these first-glance deficiencies with really, really good monsters.  I have subsequently discovered that this is the standard approach for most if not all Dungeon Crawl Classics modules – low treasure (DCC uses a non-treasure XP system), a low monster count, even a rather mild degree of difficulty on the monsters, but the monsters and other things encountered in the dungeon, and what the monsters & other things are doing in the dungeon, are dialed up almost exponentially in terms of weirdness, originality, and icky-factor.


This module, for example, includes zombies who are "sleep" in walls of mucus, are covered in said mucus, can projectile vomit acid, and feature distended bellies full of writing maggots!  There are also pits of titular worms eating corpses and a big queenie worm that's pretty gross.  This all works really well in conjunction with the "I wonder what's in the next room?" inherent tension of a dungeon crawl, except better because the occupants are not things you have read about before in the Monster Manual!


Again, as before, I manipulated treasure and experience points to make sure that the entire party leveled up to second level (except the magic-user who progresses so slowly anyways).  This was also my first session using the Labyrinth Lord rulebook instead of the red and blue Basic/Expert books, and that alone made sped the game along nicely.  Also, for Goblin Gully and Forgotten Necropolis, I had experimented with 1" square cardboard chits on a dry erase grid to conduct combat, and for this session I went back to "theater of the mind", which is just as dramatic but way faster in combat resolution. 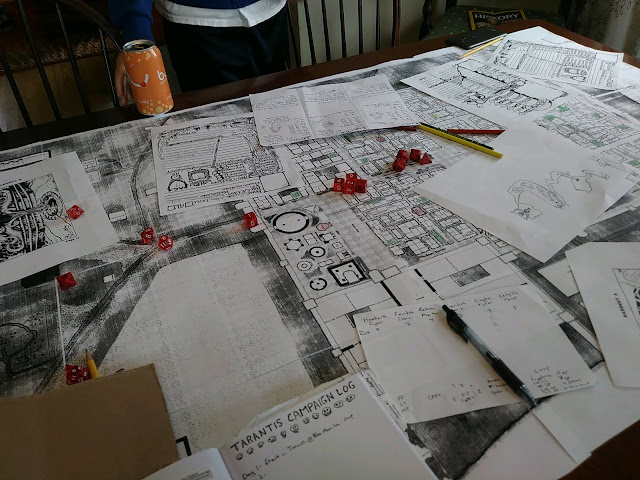 The Adventurers in this session were: