The quiet menance of the open sea. 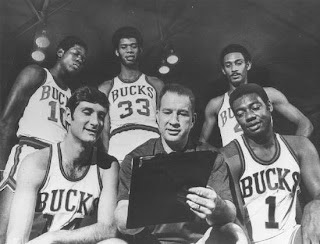 Dwelling, re: the tandem assertion the Spurs/Tim Duncan are/is boring, yet, undeniably, excellent at the game of basketball.

Now, the world is FULL of boring people, though I suspect Duncan is not one of them. My hunch is he's just not being asked the right questions.

You know who else was unstoppable on the block, & was generally regarded as aloof?

Both failed to provide beat reporters w/ easy ammunition. Yet, Kareem was perceived as being a bit of the asshole, while Tim is labeled flat out dull as dirt. This hinges, I believe, on Kareem being in LA, since its super easy to hate anything Laker, & the demand for, shall we say, GLAMOUR, is higher, & also since he hung out Bruce Lee & was a Muslim, yet wouldn't provide juicy quotes for the media. Thus, he MUST be an aloof dick.

Duncan might be what Kareem would have been like if he'd stayed in Milwaukee.2 Maybe. Point is, its a smaller city, & as smaller cities will do, values 'ah shucks' types, especially if those types win 50-60 games a year & are a perennial title contender.

1 Tip of the hat to my pops on that one. It was his observation of Duncan's unstoppablenessnish within 5 feet of the basket that caused him to draw a comparison to Kareem, & was also him who mentioned the baby-hook. This pondering led me to consider further parallels.
2 Guess here's as good a place as any: about that '71 Bucks team. 66-16 regular season record. 16-2 in the playoffs including a sweep of the Baltimore Bullets in Finals (the Bucks played in the West back then). Coach Larry Costello on Buck's chemistry:

"That was a good bunch of guys," Costello recalled then. "When we got Oscar, people wondered how we were going to handle Oscar and Kareem together but it was no problem. Oscar wanted to win a championship so bad. Kareem didn't care about the PR, Oscar maybe a little more so, but Kareem got it anyway."

d.d. tinzeroes: I think we watched this... the day before Thanksgiving? That sounds right.1

Ultratom(!): Yeah, I'd been wanting to see it for about a year or so at that point.

Ultratom(!): Because I caught the tail end of it at Peat's dojo some time before. It was on the international channel & had no subtitles or dubbing, but looked pretty damn kewl.2

tinzeroes: I think I wanted to see it because I'd read about it over at the old TeleportCity site, before they updated it.3 I'd also seen director Keita Amamiya's Moon Over Tao & the 2 Zeram films & liked the zude's stuff.4 The cover was pretty badass looking, as well.

Ultratom(!): Since there were no subtitles when I saw it at Peat's, I think I had built it up in my mind a bit much. So I felt a little let down after actually seeing it.

tinzeroes: Its true. As nice as the production design & costumes can be, the plot's a little iffy. And sometimes the costumes look like a high-end cosplay convention production or something.

Ultratom(!): Yeah the set design was great, as was the costuming. Very post apocalyptic, in a good way.

tinzeroes: Its also mercifully short. Maybe an hour. The vast majority of Japanese films average a painful 2 hours. I've read this is because, for some reason, the Japanese never let an actor speak off-camera.

Ultratom(!): The final battle was the best. The super-white painted room? And when Haikaider & the bad robot would miss & punch the walls they were filled w/ blood-red tubes & stuff? That was kewl.

tinzeroes: I give it a pair of Lew Alcindors & a Dreamcast.

1 KAIJU SESSIONS. These were a seminal, pre-Reviewiera collaborative project between myself & Ultratom(!). I recently realized they're ideal Reviewieran capsule reviews. This discussion of 1995's Haikaider was originally part of KAIJU-8, a double-feature which included Gojira x Megaguirus (’00).
2 Reader beware, Ultratom(!) sez stuf like 'kewl' alot.
3 Truth be told, I owe Teleport City's Keith Allison huge debts of gratitude. I believe, if I remember correctly, that it was he who would gush about how great Patlabor was, among other things. Sir, I salute you!!!
4 Director/writer Keita Amamiya is a sort of modern day Harryhausen. Albeit, he might be working w/ budgets smaller even than Harryhausen’s. But the main point is Keita is a F/X kinda guy 1st, & a film-maker 2nd. He started out doing F/X for projects like the feature-film Gunhed & various Kamen Rider television shows. From there he worked his way up until he directed & wrote Zeram. Since then he’s helmed several projects, including Moon Over Tao, where the sci-fi element is present but reduced; & the tv miniseries Mikazuki, which looks fantastic, although I hear it bombed ratings-wise.