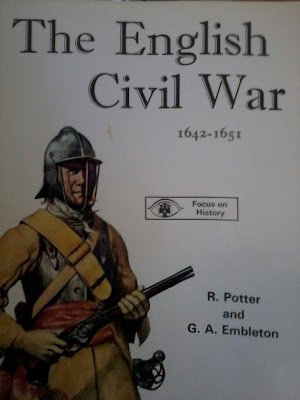 I found this little volume* at Powell's, and as it's nicely printed on glossy paper and has lots of 17th century illustrations throughout, it seemed worth the pick-up.  This is what I call a "museum history book", in that the text wanders from one topic to the next with no transitions, rather like walking from one room of a museum exhibit to another, so, for example, in this room we find samples of mid-17th century English women's clothing, and in this room a little bit about various firearms, and in this bit some pretty flags, etc etc.  In the end, I found this volume quite enjoyable, since I like finding out about the little details, and the "Big Story" elements are thankfully absent (especially as they are covered exhaustively elsewhere).

*Just 96 pages and that's counting some pages that might as well be blank.
Posted by d.d. tinzeroes at 9:15 PM No comments:

Email ThisBlogThis!Share to TwitterShare to FacebookShare to Pinterest
Labels: hands are more than a way to interface with a controller

Bret Easton Ellis is my favorite living author. My second is James Ellroy. I'm trying to write film criticism here, so I must admit no one gives a shit who anyone's favorites are. However, I include this information because here on Reviewiera I get to document a record of my personal take on the review outside of objective criticism.

My favorite of Ellis' novels are Glamorama (1998), The Rules of Attraction (1987), American Psycho (1991) and the short story collection, The Informers (1994). The latter three have been adapted into movies. I think the less I say about them the better.

One of my favorite moments from Ellis' books is the revelation in The Informers that there are vampires living in L. A. Not metaphorical vampires, but full on Lost Boys or Anne Rice realized classic monsters. The vampires are mentioned earlier in the book to establish a foreboding thread to be used later.

I have become sick of the ad nauseum syndicated drivel that regurgitates the same lazy adjectives to describe Ellis' characters: shallow, homosexual, paranoid and homicidal, for example. Nowadays who in filmed entertainment isn't? Paul Schrader describes Ellis' style as, "rich people doing bad things in very nice rooms." I think Ellis characters are a combination of the rich and poor; the naïve and the sociopathic; the sexually obsessed and the sexually exploited; and the thin and beautiful and the thin and beautiful. His satire is targeted at the heads of the entertainment industry and all of the mouths that feed at the teet of Hollywood.

Tied for the best screenplay of 2013 along with Blue Jasmine (Woody Allen) is a movie directed by a 67 year old man from a vital 49 year old author. 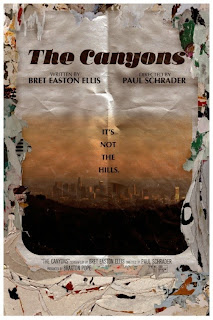 The story goes something like: Schrader asks Ellis if he'd like to rework some of his characters into a script to shoot on a microbudget, and it should work because the film would consist of mostly interior dialogue scenes. The project gets launched on Kickstarter with $30,000 from Schrader, $30,000 from Braxton Pope, and $180,000 from Kickstarter. Schrader casts Lindsay Lohan and Ellis fights for James Deen (who is apparently Ellis' idealized manifestation of his essential male lead character) and succeed because no studios are involved--the insurance would supposedly be too risky.

The Canyons (2013, Schrader) was shot on the Alexa and filmed in L. A. locations. It looks like film. The pacing is slow, but brooding--layered with ambient electronic suspense cues.

It's a Bret Easton Ellis movie.

Ellis' lead characters are the three involved in the classic love triangle. Christian (James Deen) stands out as the sneering, lip-pouting walking tool of alpha masculinity. He is a constant: a trust fund kid with daddy issues and a libertine taste for kinky sex. Ryan (Nolan Funk) and Tara (Lindsay Lohan) are defined ultimately through the changes Christian causes them to undergo.

Christian is practically one of the vampires from The Informers or, more accurately, etched out of the same mold as Sean and Patrick Bateman or Bobby Hughes. Ellis specializes in this type of character--depraved monsters whom no one suspects of the atrocities they are capable of until it's too late.

Christian makes a comment about producing the movie Ryan is cast in that describes his motivations as, "I said whatever money the Mexicans came up with I'd match." And furthermore adds that he only got involved in producing so his dad can approve of his career. The world of The Canyons is literary because L. A. used to be the capital Tinseltown, yet it's replaced here with a porn actor named James Deen (if Ellis is saying this kid is today's James Dean, and I think he is, then one begins to appreciate the satirical fantasy and its aim), Lohan acting as a lazy sexessory, and a bunch of rough trade who get cast because they let someone fuck them. Oh yeah, and Ryan drives a white Bronco (yeah, one of those white Broncos).

That scene where Tara switches off the classic Hollywood movie she's watching to use texTV says a lot.

Tara represents the real life 2010s celebrity. She's a mess. She does nothing but smoke, drink, and screw. But she looks kind of sexy.

In a world where anything goes, it is Ellis' focus on Christian's wants (sex and Tara) that make this tale indelible. Since I saw this the same day as Blue Jasmine I noticed that The Canyons also features a man with wealth who abuses women and an opponent without money who tries to compete in the romantic world of the upper class and learns that he is outmatched.

All Christian cares about is sex.

All L. A. cares about is sex, in this film. And I guess this is where the final layers of self-reference are noticeable. The Canyons is a sex movie in the sense that all of the power these characters are battling over is sexual, essentially. All of the characters are basically sleeping with someone and that defines their existence. Only incidentally do they happen to all work in movies.

I commend Deen's performance. He's got that rich asshole good looking guy quality. But his performance obviously isn't for everyone's tastes because I heard quite a few people gasp-giggling at his delivery.

The Canyons also has Ellis' signature gallows humor that pops up out of nowhere you'd expect. Some of the laughs are intentional.

Lindsay Lohan walking around stripping into her bra and panties, with her white bruised thighs, freckled shoulders, smoking cigarettes and holding a wine glass through most of this movie coalesced into something insightful. Namely that this looks like what goes on in the real life of someone like her.

Sometimes the film feels low budget because of the heights the melodrama attempts to attain. But the story as a whole is crafted wonderfully. Ryan is equally as important as Christian by the end. And the way the story all takes place in 4 days makes it a wholly accessible little valentine to Hollywood in the electronic social media age.

And it is okay to laugh at Deen, even I'll admit.

--Dregs
Posted by Dregs Erroneous at 5:04 PM No comments:

Blue Is the Warmest Color

I grew up in Corpus Christi, TX. For my last couple of years of high school my family moved to the suburbs, outside of Tulsa, OK. I hated that place. After I graduated, in 1999, I moved to Portland, OR. And that's where I met most of the Reviewiera personnel.

In 1998 I enrolled in a film appreciation course at Tulsa Community College. For one semester, I made an A in that class, along with Fs in 4 others. My final paper was a superlative-ridden celebration of the first Woody Allen movie I'd seen, Celebrity (1998). That was the first film I'd admired the cinematography in--shot in black-and-white by Sven Nykvist, Ingmar Bergman's longtime D. P., crowded with statuesque supermodels like Charlize Theron and the earthy ingenue Gretchen Mol--and the beginning of my obsession with all of Woody Allen's films.

Being in a small town I quenched my itch at collecting that had failed to persist with baseball cards, comic books, or other novelties by cataloguing my own Woody Allen filmography and watching every title I could find. I had bought my own satellite dish that showed many of them, the rest were only available on VHS.

I didn't hang on to my VHS tapes.

I've made ageist comments about directors here before. However, the best screenplay of the year 2013 has been filmed by a 77 year old man. 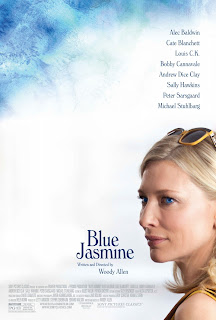 Woody Allen is known for having delightfully clever creations in his scripts that play with parallels. Like the sketch in Husbands and Wives (1992) about married Pepkin and playboy Knapp envying each other, all of Melinda and Melinda (2004), or Roy's and Strangler's respective fates in You Will Meet a Tall Dark Stranger (2010).

The screenplay for Blue Jasmine (2013) focuses on a tower of petite bourgeoisie characters headed by Hal (Alec Baldwin) that leave a deluge of disaffectedness, deception, and destruction at its base; although, the victims are the working class whom these noveau riche are family with, and find love with. The consistency that occurs most clearly is that men with money abuse women. But, early on Ginger (Sally Hawkins) defends her sister Jasmine (Cate Blanchett) by citing, "she wasn't the crook, he [Hal] was," which follows down the tower by disavowing Jasmine's culpability because she was oppressed by Hal, yet Ginger was innocent.

This movie is about "looking the other way," as Jasmine is accused of. The rich characters are devoid of ethics and if their middle class loved ones want anything at all to do with them, they must ignore their glaringly hostile transgressive-abusive natures.

Jasmine's rich backstory is told in flashbacks. This stuff is Woody Allen showing off his master screenwriting skills. It's charming. Every character is desperate to salvage some catastrophe on the verge of disaster, but it's modern and class-conscious. Jasmine is similar to some of the best roles Judy Davis acted out, as the hysteric jilted lover she so often played in other Allen films. But Jasmine goes insane for real, not movie ha ha insane, and this is where the story shows it's got balls.

The rich are made out to be insane for actually buying into the myth that they are above everyone else, and in the world of fiction that's fun to play around with. Why not? The WASP culture of material obsession is sickening in this film, and it's played for high drama. And it is because Allen is deriving his comedy from such a touchy real life source that it works so well. It's funny because it's true.

Allen has a couple of penetrating closeups that really compliment Blanchett's face. The scene where she boasts of her socialite life to Ginger's bewildered boys; the scene where she's without make-up at the end, lost, deranged.

Alec Baldwin has been in a few Woody Allen films before. He's great. But, Sally Hawkins really is the other half of Blanchett's movie. These are probably two of the most established American female leads of the year, and both of the women playing these characters are British--just a trivia note.

With the exception of Hal and Al (Louis C. K.), the men in this film are subservient to their women. And Hal and Al are the only guys who own their own businesses or are otherwise financially wealthy.

I first appreciated the way Allen can take real life situations and get so much out of class, sex, age, race, religion, and have mostly just scenes of people talking be so accomplished. But, at this late in his career, the fact that he's still covering this same material and getting more out of it is really something rare in movies.

--Dregs
Posted by Dregs Erroneous at 12:43 PM No comments: