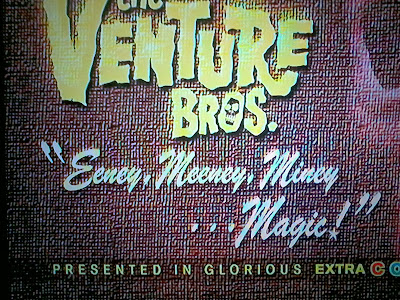 Although 'Mid-Life Chrysalis' was the first episode to take place mostly at the Venture Compound, 'Eeney, Meeney, Miney... Magic!' is the first to entirely unfold at such. Indeed, in the cold open we find Hank and Dean playing Ouija board in their pajamas. We are also more fully introduced to the differences between Hank and Dean.
﻿ 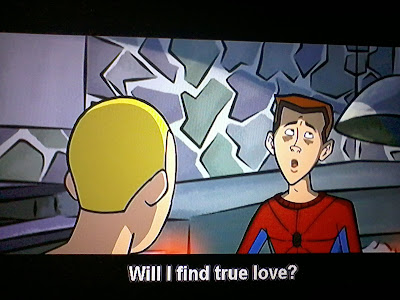 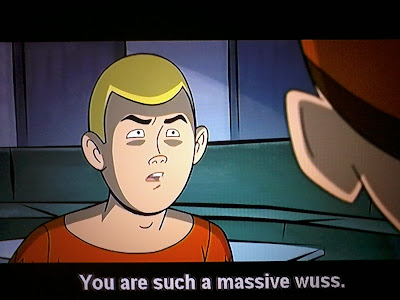 After mistaking Doc's new renter, the necromancer Dr. Orpheus, for a 'Dracula,' Dean goes to wake up Doc to report this sighting, but Hank goes to Brock. Doc is disproportionately irate with Dean. Brock proceeds to let Hank hang out in his basement room while he does push- and pull-ups, and the resulting dialogue is where Brock breaks out of his mold from the first two episodes, shedding the twitchy-rage-machine and gag humor so dominating in 'Dia de Los Dangerous' and 'Careers in Science'.

Although this episode is the first to take entire place at the Venture Compound, it is not isolated from the outside world.  To the contrary, we are introduced to Dr. Orpheus' daughter Triana, who, other than having a necromancer for a dad and affecting a goth fashion sense, is the first 'normal' person to appear on the show (to be explicit, she goes to public school and has a life outside of the compound).  By comparison, previous episodes have only featured the 'normal' kind of people you would find in strip clubs ('Mid-Life Chrysalis') or Tijuana ('Dia de los Dangerous'), or have featured no ordinary people at all (i.e. astronauts Buzz Manstrong and Anna Baldavich in 'Careers in Science').  And they certainly have not featured anyone who could be conceived as a peer of Dean or Hank.
What's particularly fun about Triana Orpheus is that she can operate as a substitute for the audience by virtue of her normality – ergo her conversations with Dean are what it would be like if you or I talked to Dean.  And what is revealed from those conversations is that the Venture brothers live a very isolated life, populated by a few adults and more than occasional violence. 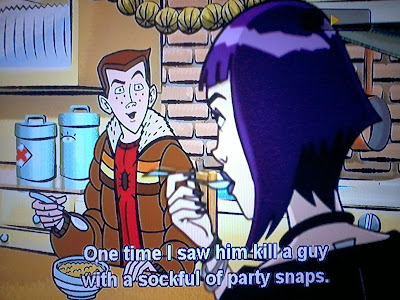 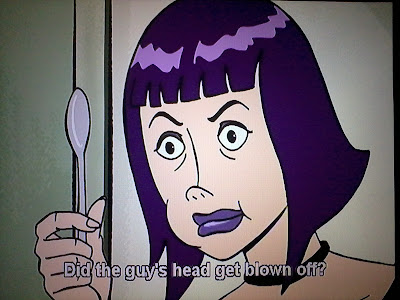 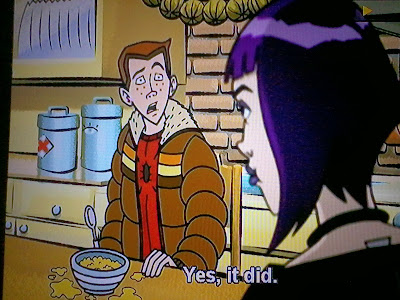 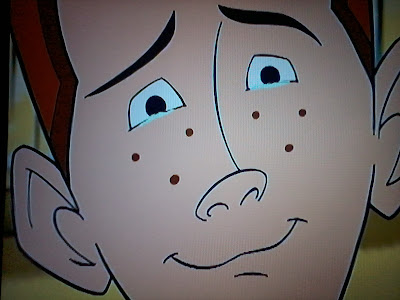 Of course, based on the little we have previously seen in 'Careers in Science', Hank and Dean's experience is not that altogether different from their father's childhood and adolescence.  The difference, it would appear, is Doc's self-loathing compared to his father's confidence and legendary status.  The father-son relationship is not just replicated between Doc and the boys but actually exacerbated.  Dean's head-over-heels crush on Triana should come as little surprise, given its allure as escape pod from the drudgery of his otherwise lonely and violent existence. 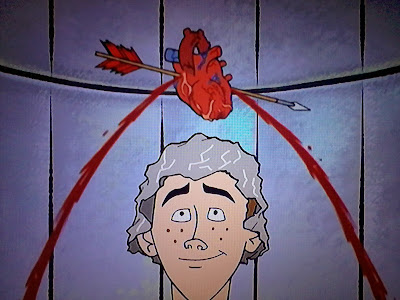 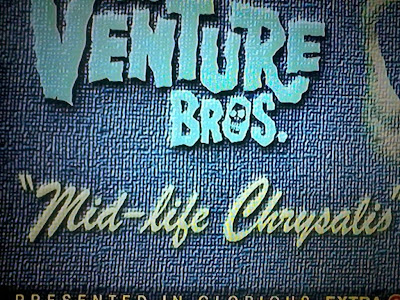 The hooks for the puntastically-titled "Mid-Life Chrysalis" are two-fold: (1) Brock's secret agent permit is expired and he must take a test to renew it, and (b) an air force officer calls Doc "grandpa," triggering some textbook mid-life crisis coping (buying a car and deciding to seek a relationship). 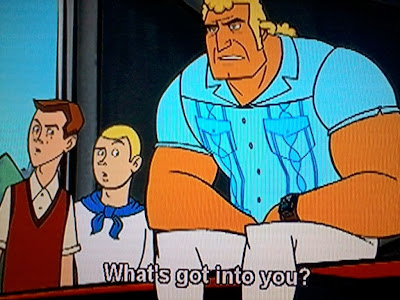 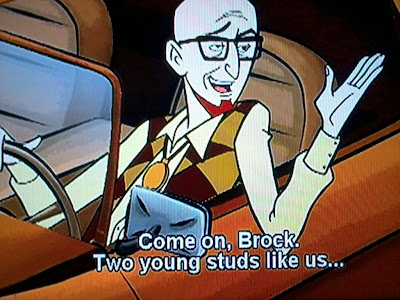 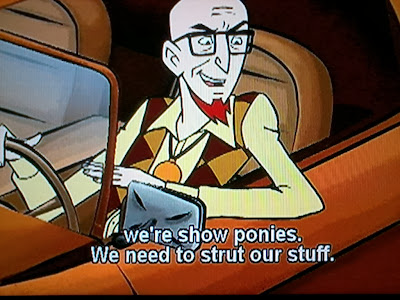 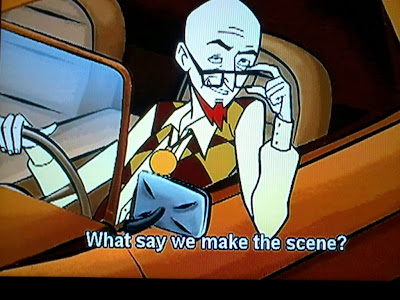 Observe Doc's array of hand and facial gestures in the above sequence. His eye brows literally dance upon his brow! His speech is patently ridiculous, but his facial expressions lend it a certain seriousness. Is Doc so egotistical as to earnestly believe what he says, or he is simply playacting and enjoying the role?

Once Doc and Brock have absconded to the local gentleman's club, we are introduced more intimately than before to the strange life of Hank and Dean At Home, where it is revealed that the boys exist in a state of never-ending arrested development, and also that Hank is prone to eclectic citations of popular culture. 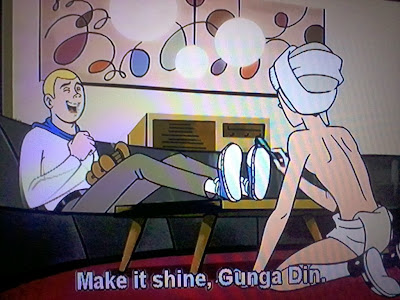 ﻿
Without Brock to protect him, Doc is easily drawn into a plot by the Monarch, and is administered a injection by Dr. Girlfriend which causes him to transform into a giant caterpillar.  The boys the begin to deviate from thier obvious mystery-gang and jet-age-boy-adventurer inspirations by revealiing thier callousness to weird and extraordinary circumstances, which is expressly discussed by Doc and Hank. 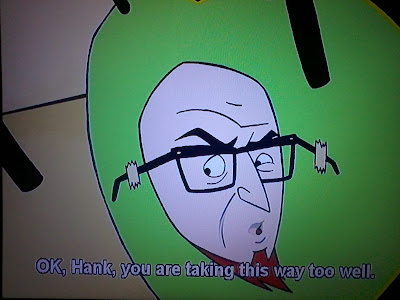 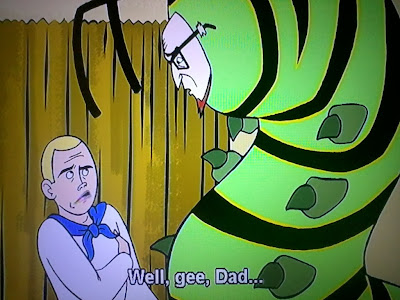 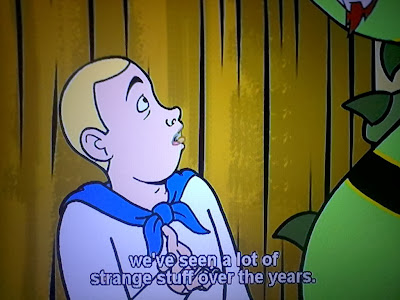 Despite this confession of sorts by Hank (noting that just last week they saw a dinosaur), Doc's response (that he wasn't the dinosaur) remains consistent with the egotism Doc has displayed in response to both the boys and other issues in the previous episodes.

This is the first episode to mostly take place at the Venture Compound, the place this quirksome four call "home."  Perhaps that is why it is the strongest episode so far - Hank and Dean's bizarre uses of thier free time would seem out of place in Mexico (in "Dia de los Dangerous') or in the Gargantua-1 space station ("Careers in Science").  Similarly, Doc's mid-life crisis antics and Brock's moping about his expired license to kill require the comforts of home as a suitable stage. 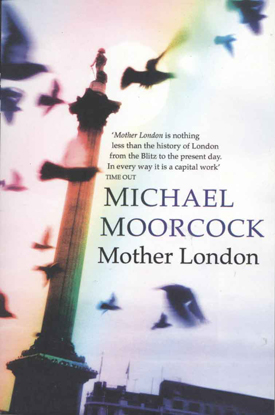 Mother London is Michael Moorcock's valentine to London - his childhood there, his youth there,neighborhoods and streets and boroughs he has haunted, people he has no doubt known and no doubt despised, memories of British movie stars and cheap pulp adventures, the ebb and flow of his own life reflected in chapters which invariably feature at least one sojourn to a London pub. And, of course, that distinct Moorcockian politik delightfully shot through the whole thing - sometimes a quick jab, sometimes in longer prose.

The novel charts the course of three survivors of the London Blitz - David Mummery, Josef Kiss, and Mary Gasalee, although not always at the same time and not sequentially and not exclusively. Notably, however, all three survived the Blitz: Mummery pulled heroically from the flames by the Black Captain; Gasalee and her newborn daughter surviving the destruction of her home and death of her husband in a bomb shelter (although Gasalee falls into a coma-state for several years after); Kiss can read minds, and is a hero of the Blitz as he could locate survivors.

All three are a bit off. Mummery is a crypto-historical geographer of London. During her coma Gasalee lived in the land of dreams, populated by 1930s movie stars, and did not visibly age at all during the long period of her sleep. Kiss shuns his gift and seems more the washed-up vaudeville performer than anything out of the comics, and is also haunted by the lament of his divorced and long unseen wife and child. Gasalee has also been the lover of the younger Mummery and the older Kiss. The social circles of all three overlap, and there is a host of secondary characters who step in and out of the narrative-perspective to provide peep-holes into specific chapters of London's past (1940 to 1985).

My Moorcock bibliography is, like most, steeped in Elric stories, plus some of his other Eternal Champion stuff and the first two Oswald Bastable books. Astute readers will know these are all thin paperback volumes, usually maxing out at about 200 pages. I read the considerably longer and meatier Gloriana, or the Unfulfilled Queen in the summer of 1997, I think. The descriptions of that fantasical alternative reality London are still with me (a heavy Peake homage by Moorcock, there, I think - the city described as almost one giant sprawling building). All by way of saying (with the exception of Gloriana) my Moorcock was limited to the lighter, more (let's just admit it) juvenile fare. Mother London is my first adult Moorocock novel, read by me firmly in, as it so happens, adulthood.

And here's the thing. After reading Mother London and the slightly related King of the City, I went back and read the Elric novel Stormbringer. That core Moorcock sense of politics? It's in Stormbringer, too, albeit mostly under the surface.

So, with me loving the politic in Mother London, and noting the politic under the surface of Stormbringer, read and consumed in my childhood, I realize that I am in fact an intellectual child of Michael Moorcock.

Email ThisBlogThis!Share to TwitterShare to FacebookShare to Pinterest
Labels: 1988, hands are more than a way to interface with a controller, London, Michael Moorcock 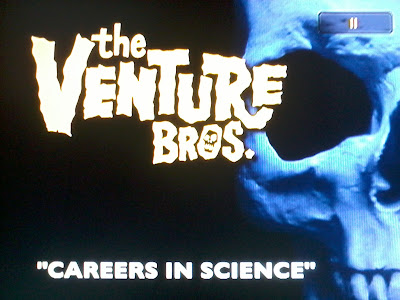 The handful of themes established in Episode 1, regardless of whether they remain in place as the series progresses, are also present in "Careers in Science." Brock remains a surprisingly cardboard absurdity, only really buoyed by Patrick Warburton's priceless delivery of a few choice lines - otherwise there is another violent rage and more of Brock-as-ladies-man elements. As before, however, Dr. Venture and his problems provide the tale's meatier content and more subtle humor, mainly in the form of a double whammy of prescription drug withdrawal coupled with a concussion, resulting in the hallucination of Dr. Venture's father, whom appears as a giant. 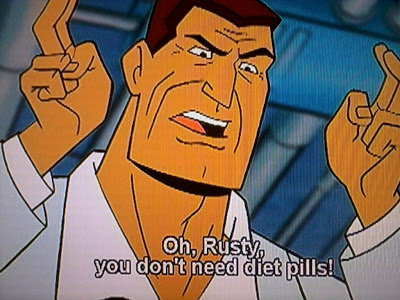 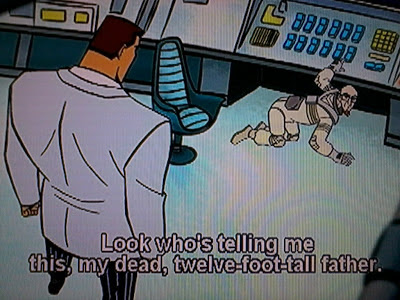 Another theme is explored, which is the naive "mystery-solving" of Hank and Dean and their apparent deep experience with vaguely supernatural phenomena and jet-age era superscience (in other words, the 'Scooby-Doo' and 'Johnny Quest' patisches).  This element is fairly involved and fully fleshed out in this episode (which, based on the animation, is probably one of the first episodes produced - some of the animation looks almost like flash, and the title card is just "careers in science" imposed on a still from the title sequence - other episodes use a stylish unique title card more in line with Episode 1).  In later episodes it will still be present, but the naivty gets dialed down significantly.

Guest character Buzz Manstrong is well written and voiced as a middle-aged boyscout hopelessly crushed out on his counterpart, the oversexed Anna Baldavich, but Manstrong's problems are perhaps a little too predictable?  Its a fun vein to mine, poking fun at the 1960s superman of the astronaut, but doesn't gel well with the supernatural and jet-age influences noted above.  To compare to Doc's strengths which make him compelling as a character, its not that Manstrong doesn't have issues, its that they aren't complicated enough. 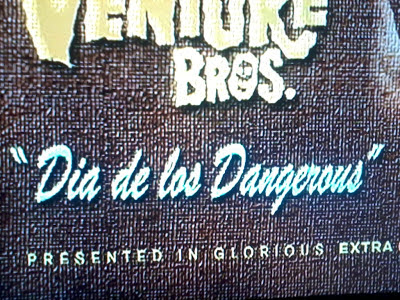 Let's skip the easy observations about this very first installment of The Venture Bros.: some of the voice acting is not quite nailed down yet in terms of inflection or tone (Dean, The Monarch), the animation is slightly crude at times; Brock always does this twitching eye thing, and also a more unhinged-murderous-rage thing going on (as the series progresses, Brock appears to be a bit more joyous in his combats).  All these things change, and Brock's violence has more than a certain absurd chuckle appeal, but as in all thing The Venture Bros., there is a seedier, softer underbelly that provides the tale's real pull.

These are characters with problems. Dr. Venture has a X-1 superjet, a bodyguard, and a talking robot, but he's strapped for cash, and inquires about payment for a lecture at Community University of Tijuana mere moments after the last student leaves and even fewer moments after casually referring to Dia de los Muertas as that "dead people Christmas." 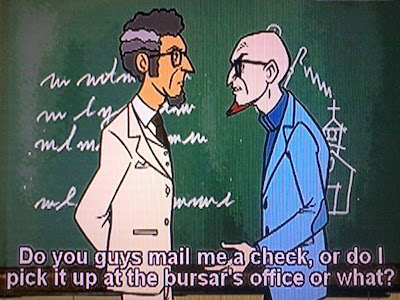 To further underline Dr. Venture's selfish craven nature, he literally walks out of the building, shoves a wad of cash into the hands of Hank and Dean and dismisses them so he can go obtain prescriptions from a Mexican doctor, an exchange where he further asserts the backwardness and inferiority of Mexico. 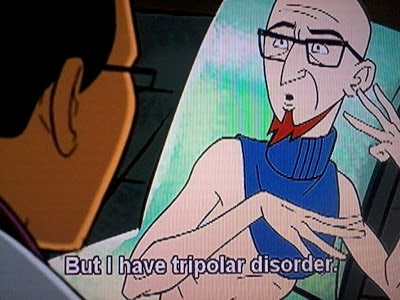 Meanwhile, the boys are kidnapped by the Monarch, who becomes disturbed by the unresponsiveness of Dr. Venture to his ransom calls.  To Dr. Girlfriend he notes that Dr. Venture has never even told the boys he loves them. Contrast this with the end of the episode, where Dr. Venture casually refers to the "world's greatest dad" thing in order get what he wants from the boys.  Disfunctionality is writ large in the margins, and while other elements of the serial change as subsequent installments unfold, this undertow remains consistently strong.