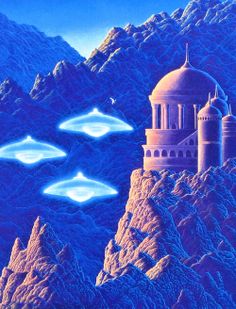 I don't remember where the poster came from, but I remember the blue UFOs hovering over hills with duct-tape loops holding them on the wall, and I remember knowing—but never learning—that it was a painting by Roger Dean. Somehow I knew also that Roger Dean painted album covers for Yes, who at that point I had certainly never heard. The poster lived on one wall or another for a few of the places we lived in in the stretch during which I went to two schools for fourth grade, a third for fifth, a fourth for sixth, and a fifth for seventh.

When the summer ended and I rejoined my parents for (a couple weeks after) the beginning of seventh grade, my uncle, my mom's youngest brother, was living with us. He'd work with me on Frisbee throwing / catching, and I'd sit in his car and listen to his tapes, or the radio, soaking up his thoughts on Don't Stop (drumming on the steering wheel) or Everybody Have Fun Tonight ("everybody Wang Chung tonight") ("This is an anthem!"). I suspect but can not prove that he was the original source of the poster—I know he was the source of my first orange crate of records, turntable, receiver, and speakers; he'd moved out one night, unexpectedly, after a falling out with my mother.

It was 1986. I didn't know much. I knew I'd loved a glowing-blue poster, by a guy who did album covers for Yes.* I knew AC/DC was my favorite band, maybe my favorite thing, I knew my favorite novel was Starship Troopers, with all its powered armor and pointedly problematic patriotism. Flipping through the orange crate, I saw art familiar, friendly to my eyes. I pulled out it, and skimmed song titles, and when I found "Starship Trooper", I knew this is, this has to be, For Me. I knew, before the needle hit the groove, that this would surely crunch harder, punch faster, than anything off of Flick of the Switch.

What I heard was, essentially, early R.E.M. with a more expansive heart: soaring organ, chiming guitars, carefully plucked, and a falsetto opening the song with "Sister bluebird / flying high abo-o-ove".

I was nothing close to prepared for this. I pulled the needle up and off, stuffed the record back in its sleeve, went back to hard rock radio and didn't think about Yes again for close to 20 years, when my girlfriend was out of town, and I had her mom's car so I could dogsit, so (naturally) I went to Best Buy, where I made a joke purchase of Yes' greatest hits...which blew my mind...and then, a few years later, I was at last ready to realize: Yes makes pretty music that makes me happy; sometimes that's what I want.

Now "Starship Trooper" is one of my favorite songs. When the pretty, hopeful, bombastic section (that I'm pretty sure is called "Life Seeker") gives way to the quick-stepping-then-electric "Disillusion" part (probably), with its layered "aaaahhhh" harmonies, that is extremely pleasing and heartening. When everything drops out and phased, flanged guitar carries the day solo for a while, with a hook so irresistable that Love & Rockets would have a huge hit with a song consisting exclusively of it, then building intensity and instrumentation on top of it for long minutes...then the coily solo comes in and combines soaring with the kind of heart-cutting wince of happy pain you feel when you see your crush (or when I see a particularly blocky puppy head), I realize, in as real a way as I can manage: this is church music.

Twenty years ago, when I heard Yes, it repelled me. A few weeks ago, working a strike in a town not my own, lonely (and exhausted, and generically upset / sad) in a hotel room, I paid for a music streaming service I'd used the free version of for years, putting up with mostly awful ads and unable to download anything, subject to data availability and the whims of Wi-Fi. The first thing I downloaded: Fragile. 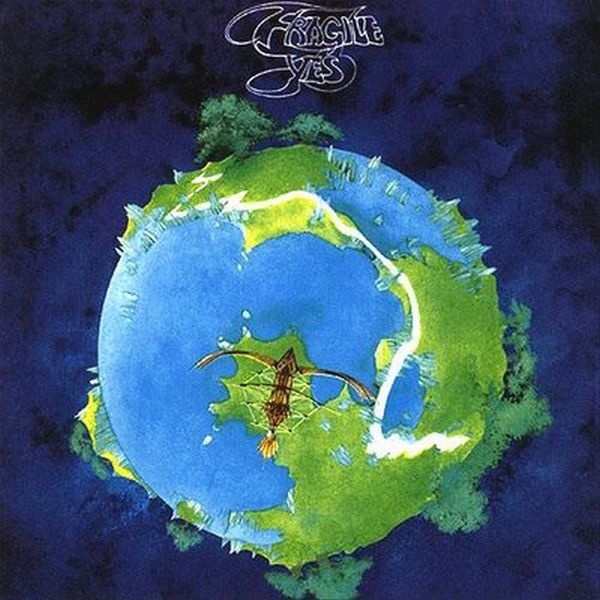 NOTE: The artist responsible for my poster, and, I think, a few other artifacts from that time that I haven't been able to remember clearly enough to run down, was not Roger Dean. A lot of the things we just know, but maybe can't remember learning, turn out to be not so, later. This may be particularly true with the knowledge of, and imparted by, Record Store Guys.

The artist is Gilbert Williams. The image I loved, I recently learned, was an album cover for Crosby, Stills, and Nash. It probably sold a couple million copies. thing it's important to learn is that a cool thing can be shared. It doesn't have to be just yours. (My copy of the poster did not have any words on it, though. I have to make that clear.)

Posted by Fat Contradiction at 11:22 PM No comments:

Email ThisBlogThis!Share to TwitterShare to FacebookShare to Pinterest
Labels: boxart, credit where credits due, HEAVY TUNES, it is never not the 70s, never thought of it that way before, Yes
Newer Posts Older Posts Home
Subscribe to: Posts (Atom)