I've never been a fan of Alfonso Cuarón. I don't remember Y Tu Mamá También (2001); I don't watch Harry Potter; and Children of Men (2006) was boring as shit. I dismiss Children of Men because I typically decide if I love or hate a movie before I see it. And, based on the premise: a world where women can't have babies anymore... I knew I would hate it and I do. Similarly I love Jonze/Kaufman, but Her (2013, Spike Jonze) already frustrated me with the what if a guy fell in love with his computer? premise in its trailer.

But Cuarón has Chivo as his ace. When I saw the trailer for Cuarón's big budget Fall 2013 3D blockbuster in space with Bullock and Chivo in the mix, I knew I'd love it. And I was shocked because of the films I know I'll love, rarely are hundred million dollar effects blockbusters the ones that hook me. 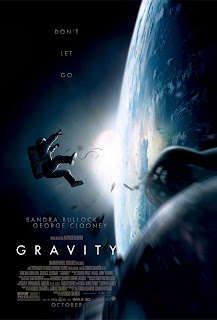 It's a fine dessert.

It's eighty minutes and change of flawless eye candy.

The main draw is the setting. We are in space. That's the whole point. Take the story and restage it anywhere else and this movie is yawn inducing. However, this short capsule of Dr. Ryan Stone (Bullock) dealing with debris from a soviet satellite explosion is riveting because of the detailed portrait painted by Chivo and Cuarón.

Chivo is Emmanuel Lubezki, AMC, ASC. He shoots all of Malick's films since The New World (2005, Terence Malick). I prefer his style in Gravity. Chivo's  more static and fluid, not as kinetic and Jell-Oey. The images in Gravity aren't as arty as Malick's stuff. I don't know why but this movie is so applaudable for characteristics I would normally connote a sell-out piece of crap of imbuing. And that's why I have come to call Gravity a classic.

Chivo's soft lighting always keeps a feathered gradation of shadows and skintones on these 2 movie stars. He's learned that hard shadows are his enemy. We never see the sun in Gravity. And we are usually within close sight of the Earth, which makes sense considering that's the confinement of the world of the story--just above the Earth's atmosphere.

The two big set pieces are the two separate instances of orbitting debris that Kowalski (Clooney) clocks in as arriving in ninety minute intervals. The first act is so awesome and serene, when the collision approaches it is truly breathtaking because the technology of the vfx is used so effectively. I didn't even realize I could think astronauts and spaceships were cool until now. And the silence is a neat contrast to all of the loud visuals.

Bullock, America's sweetheart, is wonderful. Normally I can't stand her. She is America's everywoman. She's in shape, but not stripper hot. She's mousy, but alternately exotically striking. She's vulnerable, but brave. She's mediocre, but sharp. The cypher of Bullock in zero gravity is the perfect prism to refract this protagonist's lonely "Twilight Zone" confrontation with isolation.

I didn't laugh once. But Clooney is adequate as comic relief.

I can't begin to wrap my head around how they blocked this, but the feeling as an audience member of floating in space and the filmmaker's success in orienting the geography of the set pieces is undoubtedly masterful. The look of a film is something I'll always value above all else, and Gravity is so aesthetically well thought out that I got to go back to the joys of suspending disbelief.

--Dregs
Posted by Dregs Erroneous at 3:28 PM No comments: