Okay so I'm a latent goth. In the middle of my sophomore year I transferred to a small high school and my only friends listened to Marilyn Manson, Tool, Nine Inch Nails and all had long hair and sometimes used black lipstick, nail polish and fishnet Hot Topic clothes. None of these habits rubbed off on me. I was trying to dress like a prep because I thought it would help get chicks and definitely a little wannabe gangster, but I listened to Björk, Melvins, Pavement and Yo La Tengo. A few months ago I started wondering what Nine Inch Nails' "Broken" EP would be like to listen to, then I started watching Tim Burton's The Nightmare Before Christmas (1993, Henry Selick), Charlie and the Chocolate Factory (2005), Alice in Wonderland (2010), Dark Shadows (2012), and Frankenweenie (2012). Then I realized I've only worn black for the last 7 years and a month ago I had a compulsion to watch the Underworld movies for the first time. 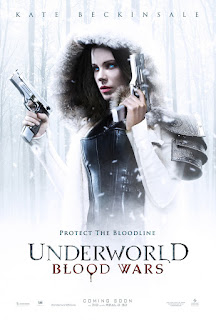 Underworld: Blood Wars (2016, Anna Foerster) succeeds in character. SELENE has lost her love, her daughter, all the vampires are hunting her and there's a new even tougher werewolf named MARIUS organizing an attack on the vampires; which she expertly diffuses, while gaining even more special powers, and learns that Michael Corvin was killed by Marius as her daughter pops up for a surprise visit at the end to set up Underworld 6.

My main complaint with Underworld: Blood Wars is that it seems to be missing all the relentless fight scenes with graphic violence. Most of the movie is just waiting for the showdown between Selene and Marius, which is an amazing set piece awesome fight, but that's basically like it for like the whole movie. It happens during a brief werewolf siege that typically would have been longer with a higher body count, but does have a great shot of DAVID coming out from underwater while simultaneously slicing a werewolf in half thrown in.

It felt like the kills were sparse but more thoughtfully crafted. Which, again, I'm not fond of. Right now Underworld is the only contemporary film franchise I'm entirely invested in, and aside from Beckinsale what's won me over is that these popcorn genre hybrids are rated R. And part of the reason they're rated R is because of all the bloody butchering of vampires and werewolves--that's been established. So why shy away from it?

I've been able to root for Selene also because there are no ties between her and any other characters that matter. For example, her daughter EVE from Underworld 4 shows up here at the very end and she will matter in part 6, but in Underworld: Blood Wars she is written out of the entire movie just like they did to Michael Corvin since Underworld 4. I love that they just hire a look alike actor and come up with an explanation why these characters are absent because it gives Selene more of an edge. And obviously there's the real life convenience of not having to bring back actors but still involve their characters in the plot.

But like I said I think I'm goth. So I can't excuse the anti-goth plot device invented for Underworld: Blood Wars, the Nordic fortress of Vador with its bleached haired white furred inhabitants and magic waters. Oh yeah also when Selene gets to Vador it's got some kind of Northern Lights going on and SEMIRA later describes its vampires as "pathetic peace loving cowards." Worst of all the magic waters give Selene the special powers she needs to defeat Marius while bleaching her tips! Like I said Beckinsale is the majority of my reasons for watching the Underworld movies, with her black hair, ghostly complexion, and cool sexy black leather fashion so the fact that she ends up with highlights in her hair and a white fur coat just upsets me.
Posted by Dregs Erroneous at 4:54 PM No comments: 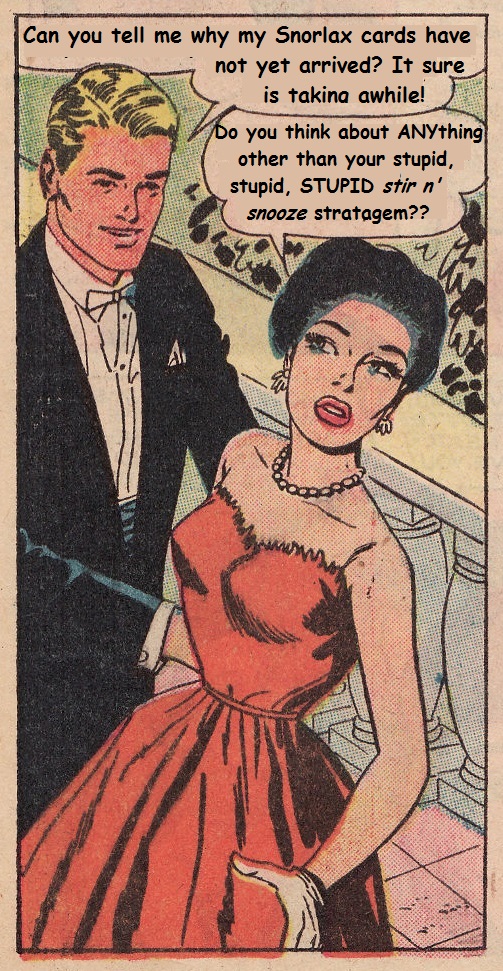 Email ThisBlogThis!Share to TwitterShare to FacebookShare to Pinterest
Labels: Curated without Commentary, funnies, The Mysterious Ways of Revieweria

Frank Frazetta started out as a comic book artist doing jungle books and such but then one day someone asked him to do a movie poster, and he purportedly made more on that single commission that he was making in a whole year doing comics, so he gladly went over to the commercial art field where he did a lot of book covers and posters and such featuring lily white topless women and about three poses of be-muscled beefcakes hefting a sword or an axe (no offense he was a good illustrator but the formulaic and repetitive nature of his work gets to you when you have to go through it like I did for this). 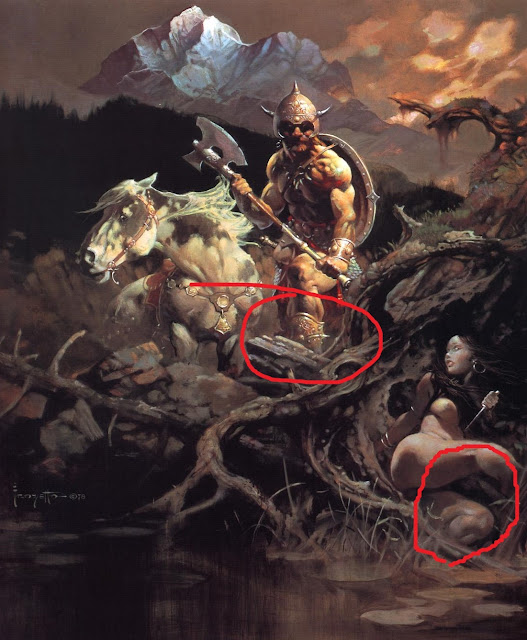 Since becoming aware of this I have noticed that a fair share of current and former comic book artists do the same "cheat" so FF is by no means alone in this regard. 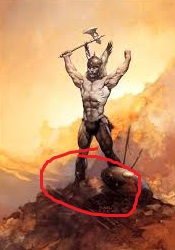 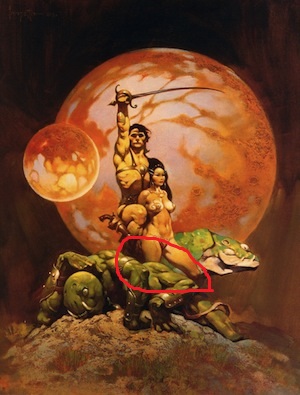 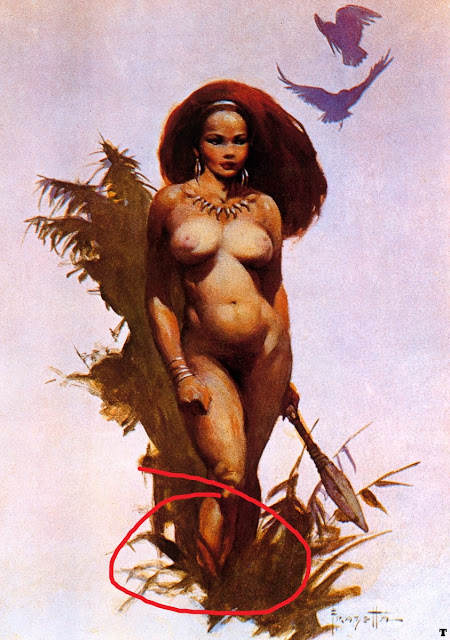 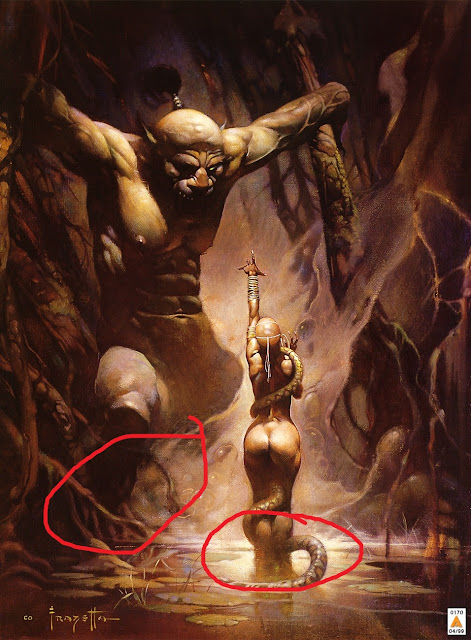 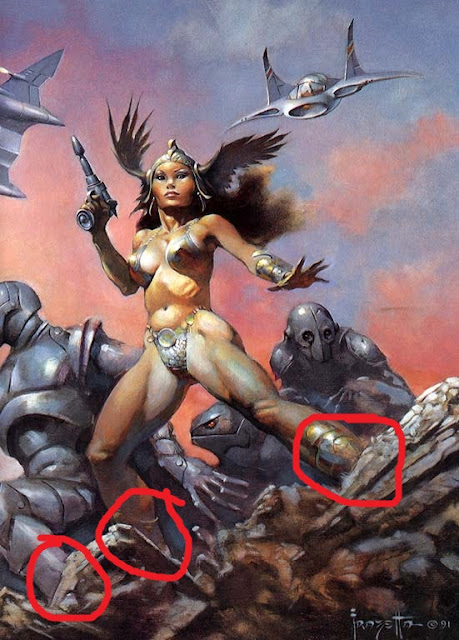 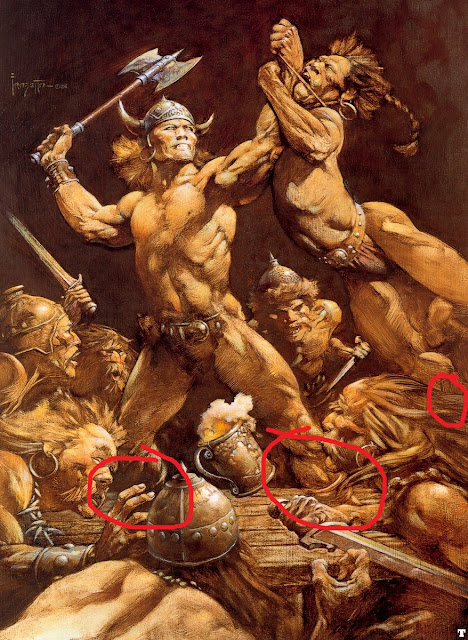 The below is one of my faves: her feet aren't quite in shadow - they just sort of blur out... 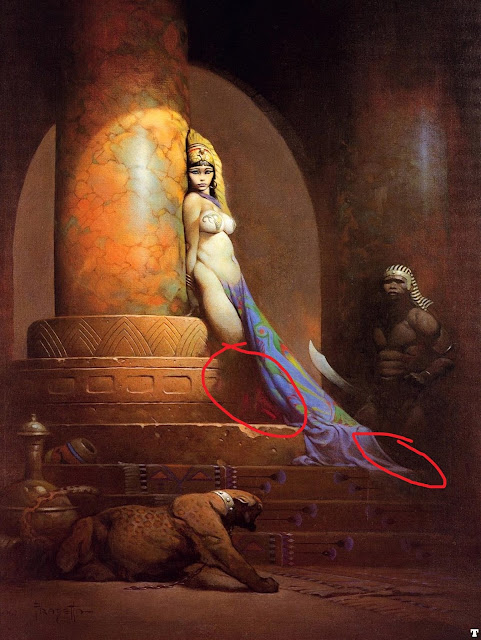 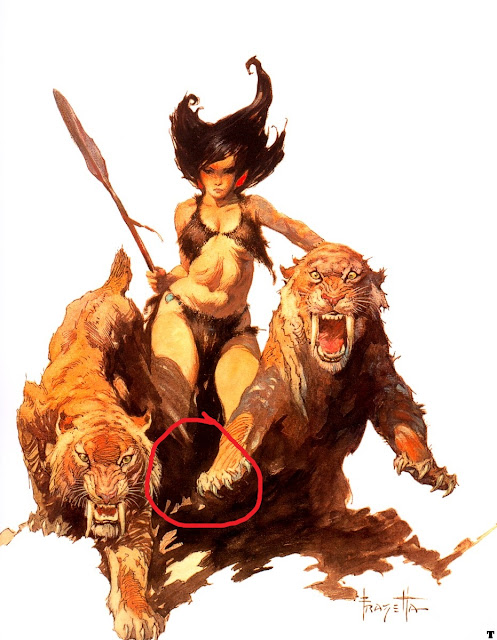 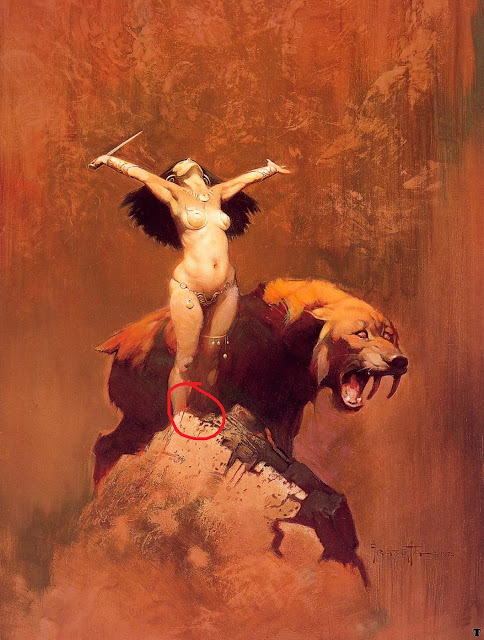 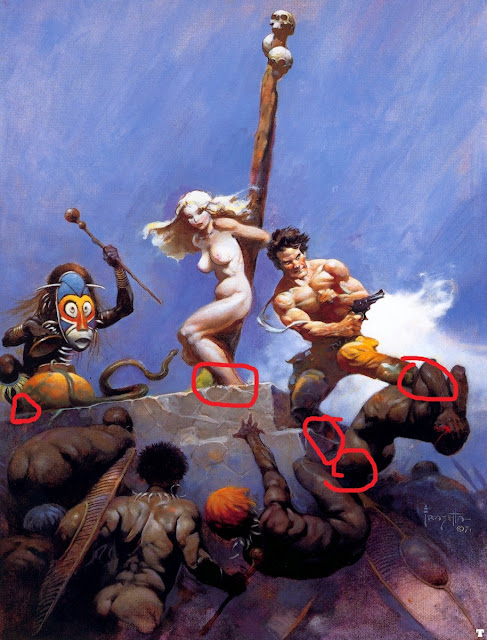 Hey here's a foot! Although it could easily also be the bottom of a really dirty sock - doe that guy have two giant toes? 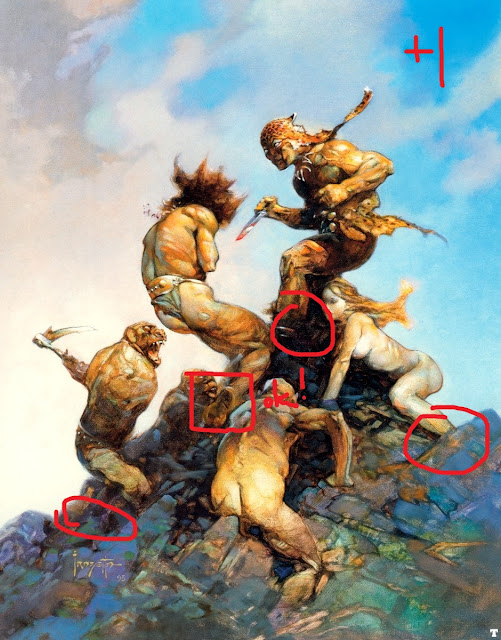 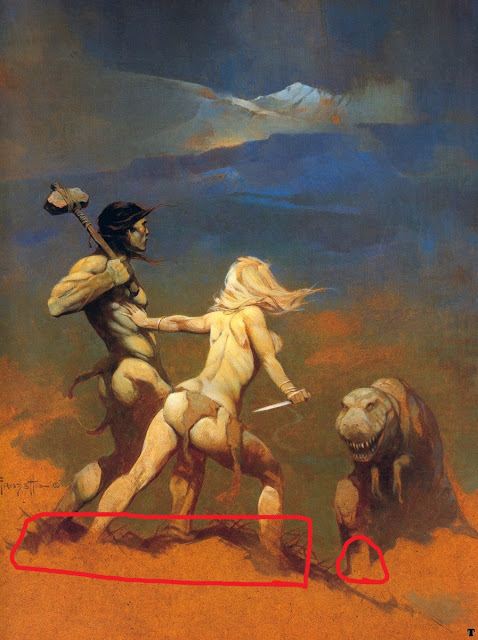 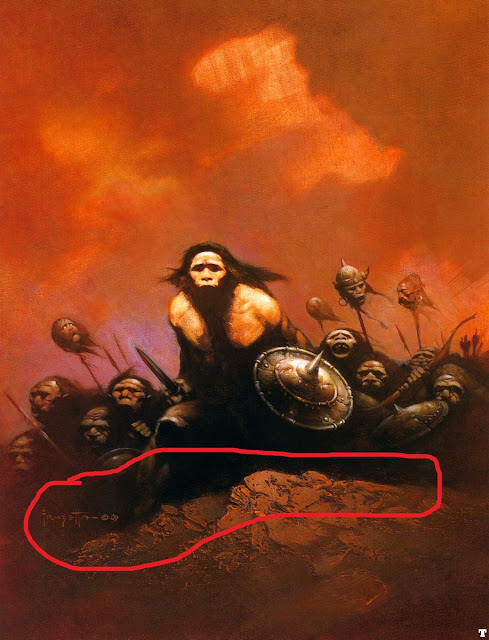 Three, maybe even four feet in this one below!  The one in the dead bottom center is pretty weird looking... 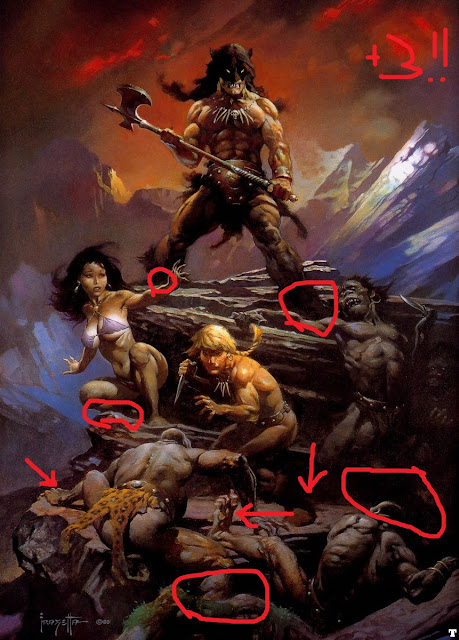 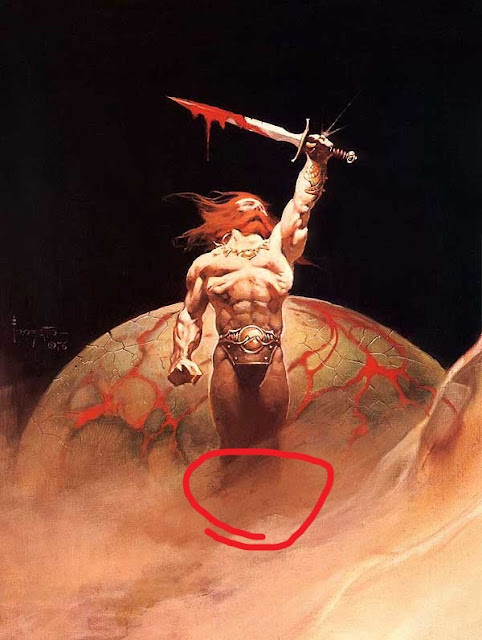 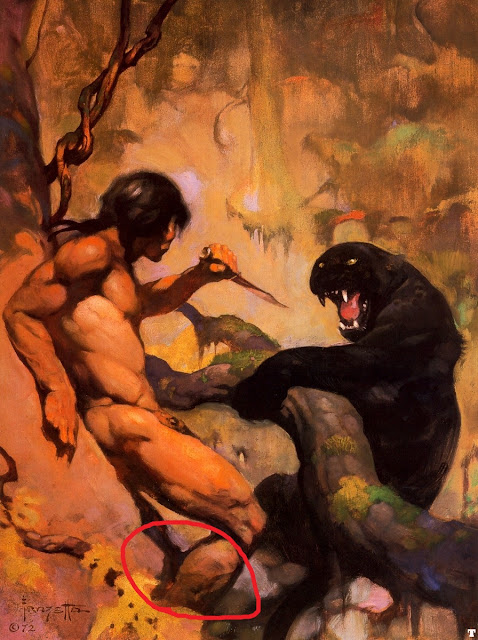 I guess the sky light people in this one have feet? 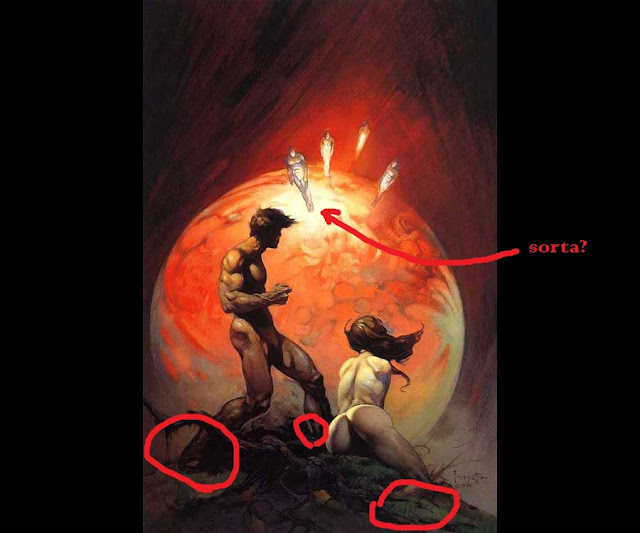 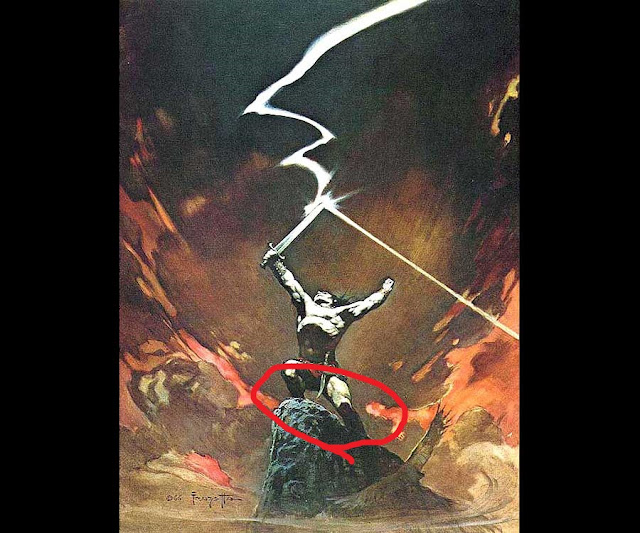 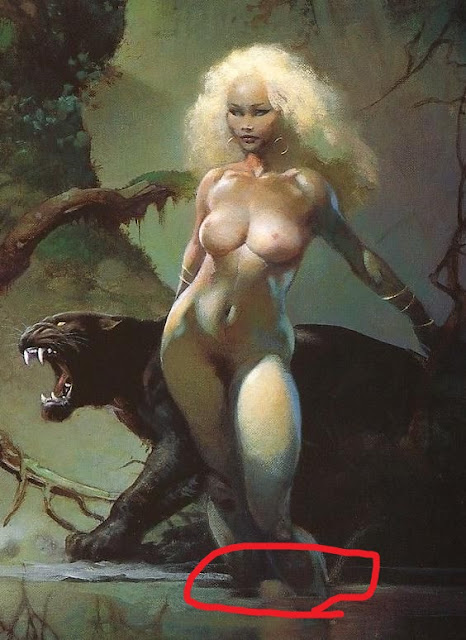 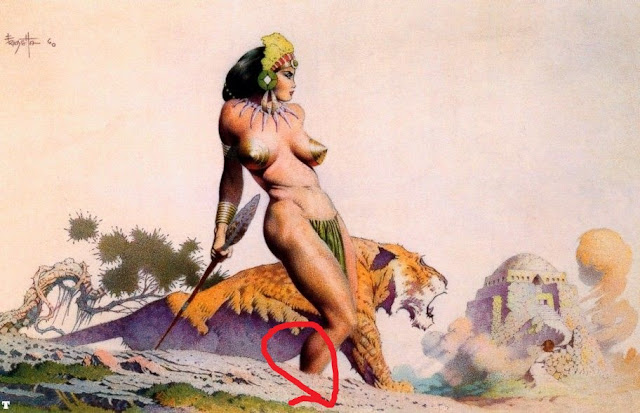 This last one: WHERE ARE HIS BALLS?? 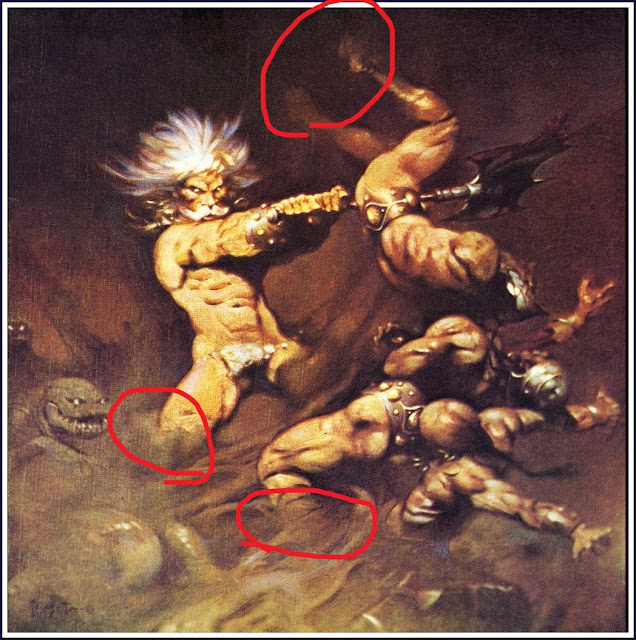 Email ThisBlogThis!Share to TwitterShare to FacebookShare to Pinterest
Labels: Frazetta Feet, I have a problem, The Mysterious Ways of Revieweria

Not sure where this is heading... 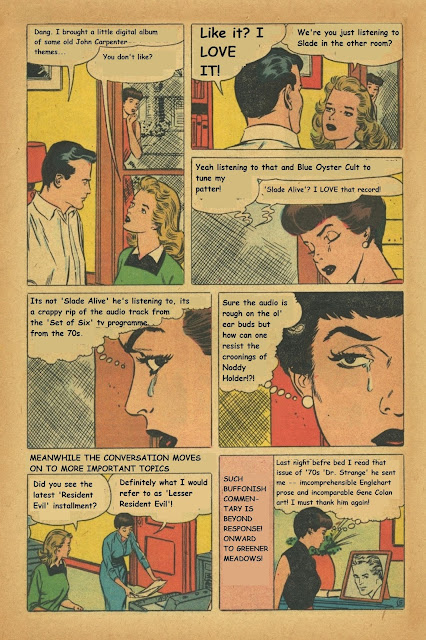