Year of Our War 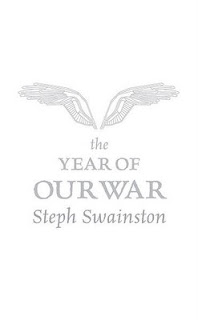 This book has single-handedly grabbed me by the scruff of my neck and dragged me solidly over into the territories of contemporary fantasy. I had wanted to read Mieville's Perdido Street Station and was curious about the New Weird writers (Vandermeer and Harrison, specifically, though Swainston and Mieville count towards this group as well), but picked up Swainston first because I was interested in reading something not written by a dude for a change (also a big factor in reading Jonathan Strange & Mr. Norrell).

The Year of Our War opens with some fantastic combat prose, think the Illiad infused with modern tactics and logistics, of humans and Awians (flightless humans with vestigal wings) against a horde of insects told from the perspective of Jant, the Emperor's Messenger.

Jant can fly, you see. He's half Awian and half Rhydanne, a sort of cat-people from the mountains that have a slender physique and a lightweight build which make the otherwise useless Awian wings suddenly functional. Jant is also immortal, by which I mean he can't age, but can be killed, by virtue of being a member of the Emperor's circle. Certain individuals, by being the best at certain things – the best messenger, the best archer, etcetera, are granted immortality by the Emperor and get to live at Castle and assist the nations of the Fourlands against their common enemy, the insects. Jant also has a problem with needles.

A crucial mortal leader dies in combat with the insects, setting off a chain reactions of events that brings the confederated nations to the brink of war with each other and annihaltion by the insects And the thing is, its kind of the circle's fault, since immortality is bequeathed on a set of skills specific to combating the insect hordes, the aforementioned slain mortal leader meets his end going overboard trying to catch the Emperor's attention so he can win immortality.

The entire book is full of these sort of complications, but is also bereft of exposition. History and world building, socio-political critiques, Jant's drug problem, all of these are dropped at the reader in the narrative. So the plot carries one along at a quite rapid pace while leaving in its wake a vibrant and rich setting. Swainston gives us the double thrill of a bang-bang-bang plot and the wonder of world-building at the same time. The Year of Our War is a true treat and I recommend it whole-heartedly.

Email ThisBlogThis!Share to TwitterShare to FacebookShare to Pinterest
Labels: bibliographic essay, hands are more than a way to interface with a controller

chrono-heat death of the universe 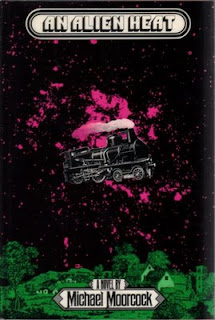 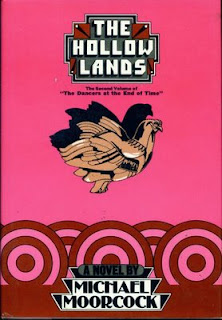 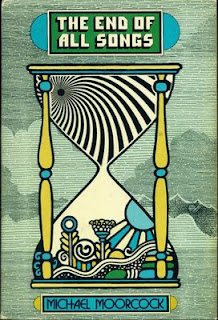 The End of All Songs
Michael Moorcock
(1976)

In a distant future, the denizens of earth enjoy access to nigh unlimited power. With the use of rings which harness practically divine energies generated by vast abandoned cities, they know no hunger, no cold, no want. They reshape their bodies, fashion buildings, clothing, even living things and the very land itself with a thought and a twist of a banded ring. Even death does not hold its thrall here, as friends simply reconstitute the dead (the philosophical wrangle of this is never broached: is a person who is reconstituted from the memories of others really the same person?).

In this future without want, without fear, humanity confronts its oldest nemesis: boredom. The years are passed fashioning elaborate themed parties. Most of these are inspired by history, which the inhabitants of the future mangle gloriously.

Jherek Carnelian's taken a fancy to the late 19th-century. His preferred mode of travel is a flying, jewel-encrusted steam locomotive(!!). His 19th-century style ranch features robotic U.S. Cavalry which slay a herd of buffalo every day. He's particularly fascinated with the 19th –century concepts of Virtue and Love, and how the two relate. When a time traveler from the 19th century, and a woman nonetheless! arrives in Jherek's time, he decides he will fall in love with this Mrs. Amelia Underwood.

Then follows the tricky business of getting Amelia over to his place, his near-helpless courtship, her disappearance back into time, Jherek's pursuit and return. Oh, and the End of Time is approaching, a sort of chrono-heat death of the universe, directly due to the massive energies consumed by the power rings.

I decided to read this series because Michael Moorcock called it a "favourite" and I thought that an interesting thing to say.1 You'd think this was a quirky sci-fi tale but really its more the romantic fantasy – I have to confess to a certain thrill to Jherek and Amelia's first kiss. Either way, the Dancers at the End of Time possess a general lack of violence or the threat thereof which I'm not entirely used to in my sciffy/fantasy readings2, but which I found both refreshing and enlightening.

"I have a number of favourites, depending which genre you're talking about. I like Dancers at the End of Time but probably Gloriana's my favourite fantasy. Elric's my favourite fantasy character. Mother London is my celebration of London and it's probably my favourite book, though I think the Pyat sequence is probably the best thing I've done in that I had incredibly high ambitions for it and do believe I pulled it off (which I wasn't sure I could do). Then there's Jerry Cornelius. Mrs Cornelius is my favourite character. It's really like asking a mother to choose between her children."

Okay, so he only says he "likes" Dancers at the End of Time, but I've already read Gloriana and the Elric Books, so I figured that gave me a reading list of Dancers, Mother London, the Pyat books, and the Cornelius quartet. The Cornelius books are next on my list.
2 Jherek and his friends can't even comprehend the threat of physical violence, or even death By extension, when warned of this impending End of Time by an alien messenger, they are maddeningly dismissive of its import. In fact, since said annoucement is made at one of the aforementioned delirious parties, its shrugged off as poor taste and cheap theatricality.
Posted by d.d. tinzeroes at 12:38 AM 1 comment:

Email ThisBlogThis!Share to TwitterShare to FacebookShare to Pinterest
Labels: bibliographic essay, hands are more than a way to interface with a controller
Newer Posts Older Posts Home
Subscribe to: Posts (Atom)