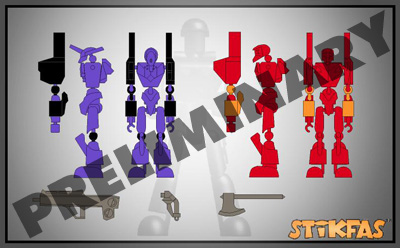 I've seen the Evangelion series twice, 1st on loaned VHS tapes1, 2nd on my own set of DVDs. I sincerely doubt I will ever watch it again. By contrast I watch an occasional Patlabor episode or three quite regularly. I'm not dissing Eva but its not like you can just que up a random episode & enjoy.

1 Said VHS tapes were on loan from a compatriot who in turn had the tape on loan from someone else. If I recall, said person also was fond, back in the day, of buying japanimation VHS cassettes from Suncoast Video at the mall, copying them, putting the copy in the original box, re-shrinkwrapping it & then returning it & start the whole process over again w/ another, new tape (this is when a copy of Akira ran you $30). I envision some bookshelf in the 'burbs filled w/ anime tapes w/o boxes.
Posted by d.d. tinzeroes at 4:17 PM No comments:

sounds of the city all around & the music, the new licks you found

Reviewiera pulled 1 of its drunken state-of-the-NBA ad hoc committee sessions the other nite. Between eating a plate of nachos I really didn't need to ingest, & Fat consistently getting his Beam overpoured, the results were typically microcosmic & longue duree. Muse willing, Fat will be submitting the thesis he came away w/ from the evening's discourse, but my kernal of psuedo-wisdom concerned an overarching seismic shift in the League & its fandom. 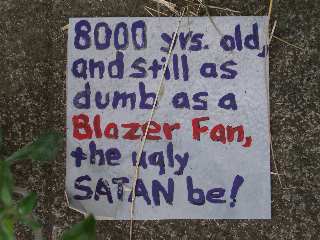 The launchpad was my earlier revelation correlating the adulation of Rasheed Wallace by many Portland fans to Portland's "Little Beirut" identity tag in the late '90s & early aughties1. This realization is truthfully as close as I've ever come to actually positing a tangible correlation between a sports franchise & its fanbase in terms of a city's self-identity, a supposition usually easily proved bunk2. Fat brought up the point that starting in, say, '99 or '00, there were alot of NBA fans who basically focused thier energies around certain individual players, w/ little concern for the teams or indeed the course & saga of the season & the L as a whole. Two of those players were definitely Rasheed Wallace & Allen Iverson, both of which produced defining streches of thier careers in that period3. Chatting about the Rasheed-Little Beirut thing, & then the Rasheed-Iverson idolization years, I suddenly gleened a potentially macro-cosmic arch. 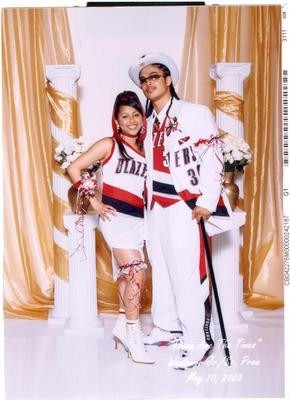 (1) Rabid homerism was essentially killed in the '90s when the Jordan Bulls won 6 championships in 8 years. Isn't there a statistic out there that something like 60% of Americans called themselves Bulls' fans in '98, or something along those lines? W/ the Bulls so dominant, I beleive that casual fans became apathetic to the plight & drudgery of thier local teams.

(2) In the post-Jordan hangover we were subjected to a bunch of Spurs & Lakers championships for 5 years, while the east was pathetically weak. Essentially, pulling for the local team remained a rather dire & depressing option. The better option, then, was to identify a handful of individual players (or, indeed, a player or two on almost every team) which you simply "liked," for whatever reason. When the Playoffs rolled around, you could peruse the bracket & say "I hope teams X, Y, & Z advance, because I like so-&-so on X," & so forth. You had little expectation of any of those teams actually achieving anything in terms of a run, since we all knew that every team was essentially a sacrificial offering to the Lakers or Spurs. 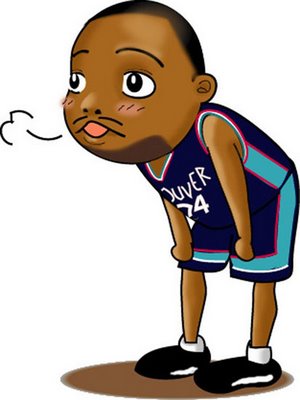 (3) Which brings us into the present-day, notably, the "trend" that kicked off in '04-'05, the year of Sonics & Suns, the class of '04. On opening night this year, Charles Barkley opined that "there are no more doormats in the NBA," & I, for one, agree w/ him. The past futility of following the local franchise hasn't so much ended, as perhaps every franchise may simply be more resplendent than they once were. Its okay to like bad teams again, because we have learned to appreciate them in different ways.4

Verily, the Empire is Fallen, Long Live the Provinces!!

1 Can Anyone Tell Me, Who is the Grand Poobah 'Round Here?
2 Especially w/ the frequency of free agent movement & trades in modern sports - its increasingly rare for a particular player, much less 12 of them, to come to "represent" thier team's city symbolically. If anything, fandom oft is little more than allegiance to a certain color scheme on a uniform. However, I'm not sure you can leave it at that, either. A sports franchise's uniform can easily be conceived of as city's flag or coat-of-arms in terms of a city's outward representation of itself to the rest of the nation. Portland fans always have & always will hate the Lakers, & honestly this might be more of a reflection of opinion about Los Angeles than about basketball. Similar currents used to be detected regarding the Jazz. By contrast no one seems to have a problem with Sacramento or Golden State.
3 In Wallace's case, playing his part in the Dunleavy Blazers reaching the Western Conf. Finals in '99 & '00, and then setting that record for techs. All the while some analysts were going so far as to call him the best PF in the L overall , in a time when the West was the Conference of the Power Forwards (Webber, Duncan, McDyess, Abdur-Rahim, Garnett). I have this distinct of memory of someone wearing a Rasheed Wallace t-shirt that featured a huge air-brushed print of 'Sheed, semi-comic book , semi-characteriture style, on the back. It was striking since it had been clearly created by someone w/ some semblance of artistic skill, produced, & sold - presumably in quantities large enough to justify the exercise. Iverson, of course, had that phenomenal lighting strike of a year in 2001, winning MVP & taking the 76ers to the Finals.
4 This point is more Fat's than mine, but this New Love owes huge tips of the hat to Simmons & Free Darko. Although neither really told me anything new, per se, both were intrumental in articulating ways of thinking about, & thusly positing different ways of watching, basketball. They have illustrated to us that its okay to love basketball, because it tells us something about ourselves, & its not completely retarded to assert that an interest in the travails of, say, Carmelo Anthony, somehow asserts something about oneself as a person. Say what you will about Simmons, but can you really deny that the dude's seeded a more vested, deeper love of the L in fans, & especially new fans, in the last five years? FreeDarko does the same, albeit at a more extrapolated level.

We've been busy manning the pumps. I was vaguely aware the Reviewiera offices were on top of the old east-side frog pond, but we didn't know there was a mole-man-esque underground lake below the sub-basement.

Super Robot Taisen: Original Generation is done, & I did done save the entire planet. The thrwarting of an alien invasion via a massively enjoyable turn-based strategy game exclusively featuring giant mecha was mainly accomplished on a train-trip to San Francisco and back. Truthfully, I was stuck on one damn mission the entire trip down, then broke through & rolled through a fistful of missions, handing out mecha-sized servings of mashed potato ass-kicking. 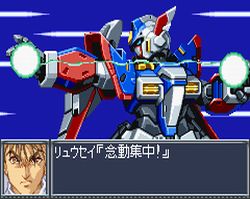 Especially noteworthy is the final 3 or 4 missions, a stage-by-stage final all-out assault on the Balmarian artificial planet, the White Star. Praiseworthy, if only because, having slogged through & figured out real sticky missions (like the aforementioned Portland-to-San Francisco exercise in frustration), the final missions were at-once competitive & yet easy at the same time.1

The general knock against Taisen in the reviewing-field is that in Japan the franchise frequently features mechs from tv series such as Evangelion, Gundam, and Getter Robo. Taisen is a product of Banpresto, a subsidiary of almighty BANDAI, which in turns owns the rights to the extensive Gundam franchise, so obtaining the licensing rights to those comes as little surprise. Its perhaps a penchant of Japanese marketing that other companies seem to have little problem allowing thier products to be pitched against each other in a video game made by a third-party. Obtaining these licenses for an American release of a Taisen game proved difficlt, which is why Banpresto went w/ the Original Generation thing. Even though the mecha involved look holy-hell a lot like mecha from the Gundam franchise, it turns out every single one of them is an original creation by the Banpresto team - hence, no licensing required.

The real consequence of completing Taisen is I can move on to Pokemon: FireRed Version. This may just be the best strategy turn-based semi-RPG I've ever laid thumbs on.

I don't know where to start. From the "collect 'em all" element, to the good ol' fashioned leveling-up process, to the "I wonder what this pokemon looks like when it evolves?", to the color-coded world ("Vermillion City"), to the strange pride & puffing-out-of-the-chest I get from winning a badge from a gym leader. Good, great video game fun.

And, of course, the NBA is underway. I stick to my best-case/worst-case scenario for the TrailBlazers: at best, they're basically last year's New Orleans/Oklahoma City Hornets, right down to the ROY in Roy & being in the playoff race (mathamatically). Worst case scenario is a record like last years, maybe 5 more wins, although the product on the floor will be infinitely more pleasant to watch.

And Zach! He really is in great shape, & I'm enjoying a summer's worth of dumbasses who called for his departure, claiming the team could go nowhere w/ him, having to suddenly & abruptly go silent (dicks). 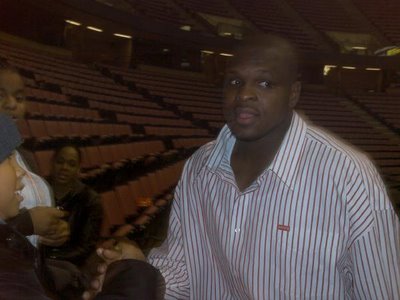 My favorite observation thus far, however, is that in a few games the patently bullshit preseason "what to look fors" which stated this team would miss "intangible" players Blake & Khrypha were put to rest. Both those players (esp. Blake) were touted last season as guys who-don't-fill-up-a-stat-sheet-but-do-a-lot-of-little-things-on-the-floor. Sorry but don't you usually only need ONE of those guys? And aren't they usually overshadowed by the true stars of the team? Straws of postivity, these were, grasped at by the media to throw the fandom a bone.

1 And there is nothing more rewarding that laying the smacketh down on a final boss. The classic example of this is the two times I've played Final Fantasy VIII. The first time I didn't truly grasp the game's strategic system, & as a result the final boss took a gargantuan 3 hours to beat (& probably 4 or 5 tries). The second time round I'd achieved a true understanding of the game's ins & outs. The final boss was defeated in a mere 30 minutes of blissful ass-kicking limit-break assaults. Now that I think about it, this may be a particular merit of Japanese RPGs in general - an almost zen-like understanding of the game is what you're supposed to achieve, & your reward will be the summary dispatch of your greatest adversaries. Miyamoto Musashi & shit like that.
Posted by d.d. tinzeroes at 10:10 PM 2 comments: