Several years back, peculiar sequencing of circumstance led me to take up Japanese toy collectioning. The original impetus was via Gozilla vinyls and plastics, but those proved somewhat pricey, so the early filling out of the shelves was accomplished through ranks upon ranks of 4.5" G Gundam figures. These were purchased at the local Fred Meyer, where the stock turned over fairly regularly, the said figures were frequently on sale, and you could have the quiet dignity of spending $4.99 on an action figure of a robot that rode a surfboard, wore a football helmet, and alternated between pistols and boxing gloves for choices of weaponry, in the relative privacy of a self-checkout line. 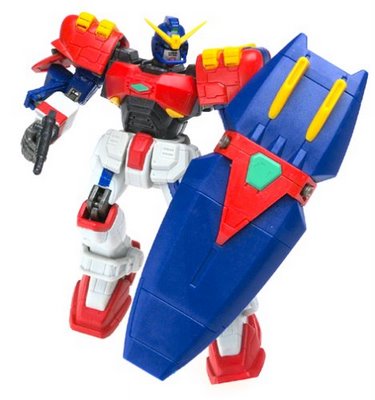 Eventually I tired of the Gundams, and attempted to expand the volume and variety of my mold-injected minions by traipsing to the then actual physical storefront of Dr. Tongues 3D House of Collective Toys on east Burnside about every two weeks and grabbing some item or another. My preferred methodology for selecting plasticine additions was to surf the Dr. Tongues site several days in advance and earmark several items (within a budget, usually, of, say, $20-$30) for closer scrutiny when I got to the store.

The ultimate fruits of this methodology was that one day I stumbled upon the Stikfas Mechana figure. Dr. Tongues raved that it possessed, like, a billion points of articulation, and more impressively, that it had actual jointed fingers and thumbs, so, y'know, it could, like, hold stuff!! No kung fu grip here, kemosabe! AND. It came with a teddy bear!

Reader be warned, the path of stikfa is a slippery slope! Despite ridiculously out-of-scale packaging (compared to actual product) and relatively high price (around $10 per figure), stikfas remain indelibly cool. Stikfas was originally partnered with Hasbro, but Hasbro jilted them, resulting in Stikfas trading large-scale distribution in for a wider selection of figures (as well as me acquiring 3 samurai and 2 dragons in the discount aisle at ToysRUs) . To wit, prior to the parting with Hasbro, the coolest figures, in my mind, were the Mechana, the Samurai, the Kung-Fu Monk, and the Dragon. Solid, reliable figures. But post break-up stikfas rolled out such neato kits as the Spaceman, Cowboy, Hoplite, Punk Rocker, Super Hero & Super Villain, and a Pirate.

Its been a while since I purchased any stikfas, but they just can't stop, can they? Stikfas has to go along and put this thing out there!!! 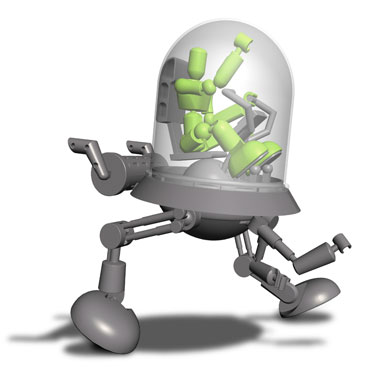 A stikfa INSIDE a mechanized walker?!?

I can't wait until my 'local' Stikfa store (the only store I know of in my are that stocks them, and it's a half-hour away...) restocks on the Dragon and Military 4-Pack...

You should definately check out the Mobster! I got tired of melee weapon characters after a while, and the cowboy didn't really interest me. But the Mobster is amazing!

You can check out my review of him at http://toysftw.blogspot.com/

PS: Do you know of any new Stikfas, beside the Walker and Dune Buggy?