Another weird year in music, one that was more controlled by my machinery for music-listening than ever before. My plugged-into-the-stereo music laptop seems to have lost the ability to play entire .mp3 files—this, just a couple years after deciding it was going to play all album tracks in alphabetical order. And my main working / archiving / everything else laptop took a month-long break when, for no reason I understand, its OS became corrupted. Thanks, Linux. I bought a turntable and mostly hated it. I quit using my little walkman and just started using my phone for everything—but once my laptops died, I was basically down to streaming music, which was fine, except at some point, I bought a Chromecast, for streaming from my phone to my stereo. After which, when I was at home, I just wanted to stream stuff from my phone to my stereo, but you can't stream from Bandcamp to a Chromecast, and most of what I loved this year came to me on Bandcamp. I would really have liked to listen to most of what I loved this year on my stereo.

Anyway. Here's my year in HEAVY TUNES, in roughly chronological order. A year of albums for me, more than songs. Some of them even came out this year!
January Early in the year, I gave Sleaford Mods the fairest shot I could. Some of their songs are pretty good! I really enjoyed "shitstreet" and "under the plastic and NCT", particularly the lyric and delivery of "three words: cage, wheel, hamster! 'ere, here's a bit of cheese—nibble the bastard!"

They didn't hold up for me, though: a combination of songs that all stick around a little too long and which are basically impossible to tell apart and a completely unacceptable Twitter presence, devoted mainly to telling people that their beats are bad, which is a little like the Ramones complaining that other people's songs are short, repetitive, and catchy.

More promising and longer-lived was Robonaut, a cool project that provided a lot of the year's best background music for writing. Between the good sounds and perfect song titles, I spent a lot of time with this one on: it's best described as a soundtrack for a science fiction movie that nobody has yet made, and the skittering noises, interesting textures, and sheer sonic interest of the whole thing was immensely pleasurable.

In January, I also started experimenting with Kowloon Walled City. We'll talk more about this later, but what I initially responded to was the curdled, emotionally exhausted, unhappy vibe. I spent a lot of my year listening to this at work, is what I'm saying.

In spring, I added maybe the best Holy Mount record, Vol, a late-2014 release with great glide-riffs, wonderful synth textures, and just enough vocal hooks to scratch all my pop-prog itches. One of the year's best records for bringing some emotional motion, mainly soaring, to static environments (mainly working). It's credibly heavy and/but makes you feel good; helpful in a grind of a year like a dull blade pressed to your inner thigh's veins.

Spring also brought me around to Windhand. I was incredibly late to this band, but when they finally clicked for me, I wanted to listen to little other than their giant-sized Sabbath riffs and sheets of mainly incomprehensible vocals. For now, I'm thrilled to binge on 2013's Soma, but I've tried the record that came out this year a time or two, and have found it pretty excellent. It will be there when I am ready for it.

Similarly, I discovered this year Oakland's own Abstracter, when a metal-looking dude at the coffee shop happened to be watching YouTube videos of them and my curiosity was engaged. It turns out that they're magnificently heavy and loud and slow, with occasional pretty moments that add breathing room. Both 2012's Tomb of Feathers and 2015's Wound Empire are great listens, with "Glowing Wounds" and "Ash" being my favorite songs, the best balanced between overwhelming volume / heaviness and flares of beauty.

The year's prettiest music came from Marriages, a band that evolved from my all-time favorite atmospheric instrumental metal band, Red Sparowes. Vaguely gothy, interestingly textured, and frequently rocking, this was my undisputed record of the year until October. Even if it did get dethroned, Salome was my year's most reliable inspiration for soft feelings, particularly on "skin", "love, Texas" and what would have been the song of my year in any normal year, "less than". Highest recommendation for anybody who is willing to mix their emotions with musical intensity.

By summer, the new Courtney Barnett album had come out, and it was as good as I had expected, if a little overproduced. Maybe the year's best record for singing along!

Summer continued poppy with Roman Cities' ep the Sharksleep Sessions. A great throwback pop-rock album by Kowloon Walled City (and Snailface, and other) bassist Ian Miller, this was the album I reached for when I wanted to feel heartened and vaguely 80s. Bonus points for the invocation of a very 80s neon-drenched version of the future in probably my favorite track, "just like water"! Other favorites were "memento" and "every time you fall".

Just as with Holy Mount, I continued to dig into the back catalog of previous HEAVY TUNE roundup appearer Verma. (Though Bandcamp sure doesn't make it easy to do that—nor do they seem to have a workable version of any other kind of "discoverability", unfortunately. Ah well.) Verma's album Salted Earth might be their best, and the liner notes they give you are definitely wonderful and worth reading.

Unsurprisingly, there was also plenty of Blue Öyster Cult in my year. I saw them for the first time and often went to bed to weirdo 80s stew Revölution by Night. Three of their best second-tier songs ("Shadow of California", "Shooting Shark" and "Take Me Away") with a couple of their worst-by-far ("Feel the Thunder" and "Let Go") with a fair bit of occasionally enjoyable filler, it was somehow an easy record to reach for, especially at bedtime.

As I was experimenting with my turntable, a couple Fucked Up records landed. I was completely "meh" on Glass Boys, including the not-as-gimmicky-as-it-sounds version with half-time drums—even that mild innovation left the songs sounding like forgettable outtakes rightfully clipped off of better, earlier albums—and thoroughly baffled by "Year of the Hare", but "California Cold" might be the single best song I have heard by the band.

Early in fall, I put myself on a no-buying-things diet, which I immediately broke to order Kowloon Walled City's new one, Grievances. I had just seen the band at the Hemlock, and the songs I had liked before had turned into songs I loved. The record is by far my record of the year. Nothing else sounded like this album, nothing else resonated like these songs. Where earlier KWC records seemed devoted to the art of unpleasant, unsettling riffs, this one creates entire landscapes of attenuated anxiety; the riffs are still there, and they hit as hard as ever, but now they embody and evoke a pained kind of endurance, in an aural space that's beautiful and devoted to pain in equal measure. For me, the best example is the title song, which was by a lot the year's best payoff to a hell of a setup.

That sustained me through the very end of the year. But in the last fortnight of 2015, some doors opened up and some air blew in. I was exposed to Okkervil River, and liked it immensely. (Sad that it took me 10 years to come around, but whatever.) "Black Sheep Boy", "Black", and "Westfall" made immediate impacts on me, with great pop melodies and spookier-than-I-expected lyrics. Very much the followup to Neutral Milk Hotel that I'd been needing for a long time.

And two great punk albums came in to abrade my ears a little bit, after two years of a lot of thick, dark gunk (Abstracter, Windhand, Solar Halos, Shooting Guns, etc.). G.L.O.S.S. made as great a punk record as everybody said, and sometimes you need a wonderful punk record to listen to. And Super Unison released a smash hit called "Photorealism" and a self-titled ep that got better every time I listened to it. High-energy and scathing, great music for breaking out of ruts and remembering to tell the cops inside and around us to get up against the wall. 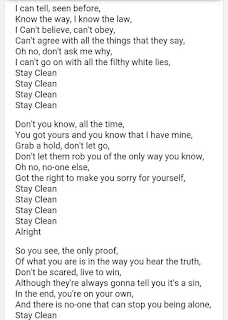 Finally, Lemmy died. I pulled out Motörhead's No Sleep 'til Hammersmith, and for the fourth time in my life, nothing made more sense than Motörhead. Like when I was 16, buying a weird cassette at a truck stop on a Greyhound trip, and falling a little in love with pop numbers like "Dancing on Your Grave" and gruff filler like "Back on the Funny Farm" and world-historically great blues songs like "Killed by Death". Like when I was 24, feeling completely alone in the world and in a new town, and Lemmy growled from stage "don't forget about rock 'n' roll, man, it hasn't forgotten about you". Like when I was a couple years older, in the same town, but alone again, and the lyrics of "Stay Clean" were as true and important as any music ever would be. I wouldn't fetishize the man—caring about women and Jews make that impossible—but the songs can still work and remind us that the good past and the bad alike live on in our days. There's promise there, and responsibility.

P.S.: on consumption. I bought everything on this list except: Sleaford Mods, which I streamed until I decided I didn't like it enough to buy; "Salted Earth", which was a free download; Okkervil River (streaming on Spotify for now, paid to see them live); G.L.O.S.S. and Super Unison (streaming on Bandcamp for now). The Motörhead and BŐC albums I bought used, but I have paid to see both bands.
Posted by Fat Contradiction at 10:19 PM

I always enjoy reading these things. Our musical tastes don't much overlap, but I come back to these posts once in a while when I desperately just need to listen to something that's brand new to me. The way you write about music is compelling because it seems so much about life-context, and that's how my musical connections run, too. So thanks, as ever, for the words and some reasons to dig around in new music that doesn't sound like the other things I usually listen to when the moment comes.

Thanks, Holly! One of these years, I'll find something you really dig. :) Maybe start with Courtney Barnett's earlier stuff? It's too witty not to appreciate, and doesn't sound like a cement mixer driving by a factory that's on fire.