What happened to Jim Jarmusch after Ghost Dog? Stranger Than Paradise (1984, Jim Jarmusch) is the quintessential indie; Down by Law (1986, Jarmusch) and Mystery Train (1989, Jarmusch) are exquisite fateful road movies photographed by Robby Müller; and Night on Earth (1991), a fun segue into his two greatest works: Dead Man (1995, Jarmusch) and Ghost Dog: The Way of the Samurai (1999, Jarmusch). (Counting Down by Law as prison movie seems a fitting trilogy.) Maybe after the wilderness of Dead Man and the urban Ghost Dog masculine genre forays he’d said all he could say? 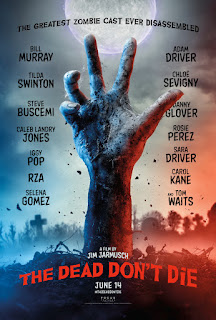 The Dead Don’t Die (2019, Jarmusch) is a zombie comedy. Those two words together didn’t give me much hope going in, but I decided to give it the benefit of the doubt anyway. What a disappointment.
Even out of loyalty to maybe the single greatest American indie writer/director of the 80s and 90s, one can only find the remnants of his former talent. Jarmusch’s once spontaneous humor that would arise out of workshop chemistry between a tailored script for a handpicked ensemble is not to be found in The Dead Don’t Die—or at least it doesn’t feel that way. The meta-humor and attempts at a post-zombie genre concoction feel labored.

The slow pacing, abrupt punchline edits, and droll humor held my attention, but it comes off as second rate from the artist who perfected it over 30 years earlier. Yet with Bill Murray in the lead role I can’t completely dismiss The Dead Don’t Die. A few months ago I was on the set of Zombieland 2 and heard Bill Murray improvise a two and a half page dialogue scene for a couple of hours and saw him in action. He comes up with all of his jokes on the spot and just keeps riffing continuously. So yes, when I watched The Dead Don’t Die I was definitely in a Murray mood. It still sucks though.

I am offended at the pointlessness of having Tilda Swinton’s character in this movie and the arch of her storyline.
Posted by Dregs Erroneous at 6:28 PM