pen is in my hand

It is a truth universally acknowledged that the internet has been a net bad for humanity. By allowing glib, superficial access to largely decontextualized facts, it's created a vast army of people—mostly men—who, perniciously, believe both that there's nothing they don't understand and that understanding things requires no more than a cursory googling and quick skimming of somewhere under four web—usually just Wikipedia—pages. (There's also the brain-poisoning feedback loop wherein the most casual expressions of approval somehow displace and outweigh any/all other potential inputs, eventually, out of sheer volume, replacing the real world entirely. But that's a matter for another time.) But I cannot deny the few archipelagos of what I can only call Good Internet which remain. Mostly they're singular. What characterizes Good Internet is usually that it is and does One Thing. It expresses one sensibility, maybe, or, more reliably, it treats (of) only one topic. Good examples of Good Internet would include:
I'm sure we'll eventually cover all of these individually. But right now I want to talk about Pen Internet.
Pen Internet is good. Here are some examples, some people taking an interest in something and working to communicate that interest to whoever might be listening.

That was fun. Now I want to talk about pens. Mostly I want to talk about good pens. What can I say? Pen Internet is intoxicating, also inspiring.
Most of what I write personally (rather than professionally), I write by hand before typing it up in vim. Some years back, I learned, by watching Tinzeroes, that everything works better when I put everything into one notebook that is always carried with me and close to hand. That way, I always know where everything is. I never have to wonder where to put something. And different pieces can, just by brute juxtaposition, connect in unexpected ways. Writing in a notebook implies needing a pen—so:
I have a lot of Moleskine type notebooks. An underreported feature of those notebooks how poorly their paper takes so many kinds of ink. The right-hand pages have a slicker coating than the left; a lot of pens skip on the right, bleed on the left. Displeasing. Also I like to write a lot of postcards, which tend to have a coating that smears basically all inks... 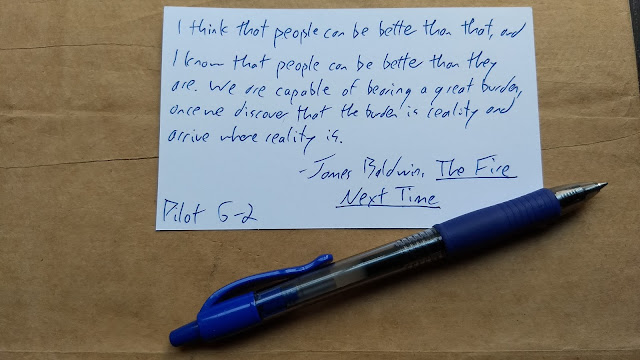 This means a popular option doesn't work well for me, so, so sorry G-2, but you don't really make the cut. Other reasons: (1) I have had spills annihilate things I have written with this gel ink (making it bad for mail); (2) the rubber thing (a) is condescending and (b) gets loose on the shaft, which is distracting, or gets gummy, which is disgusting. Linewise, 05 is a little bit too thin (scratchy on soft or thick paper); 07 is a little bit too thick (makes it hard to write as small as I like to). Poor experience on coated paper, ill-advised hand feels, ubiquitous, cheap, allows fidgety clicking, adequate weight for debate spinning: 6/10; acceptable fallback option. Often have one to hand to loan out or write a check with. 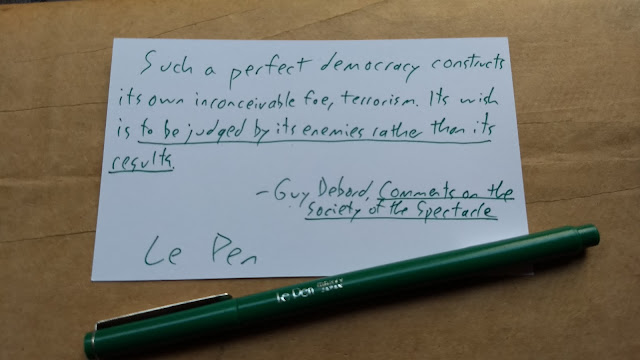 Le Pen felt tip. Dirt cheap. Colorful! Beautifully designed, remarkably comfortable. Ink not at all waterproof. Too light to be debate-spun. Make a delightful scratch sound when used. Last a surprisingly long time, often given to me by my girlfriend. Can't write a check with it. 8/10; excellent option to be deployed in virtually any circumstance. 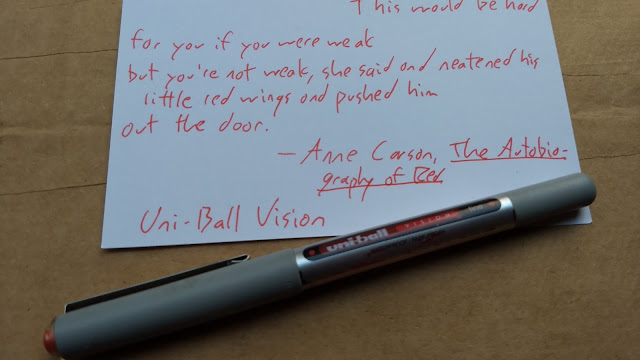 Those weird ones Noodles likes. Widely considered the gold standard for people who don't fetishize writing really really small. Good for writing checks with. Wonderful pens, but somehow don't work for me. Too fat, with too thick a line, maybe. Maybe just a vibe thing. 5.5/10; make me feel guilty, like I don't like chocolate or something. 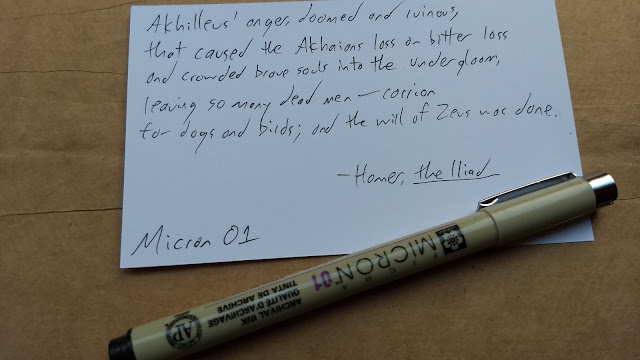 "Artist pens." Magnificent writing experience, can be a little too cushy. Easily lost or stolen. Hyper fucking expensive. Can intimidate by giving writer the sense that the ink is too permanent for anything but a good thought well expressed, and can therefore inhibit getting things down on paper, which is the only important/useful thing about schlepping a fucking notebook around.
But what did you expect? When you pull Excalibur from the stone, you gain power, but you also inherit mad responsibility. 7/10; can't really be spun, no good for the checkbook, fairly good for postcards, other mail. 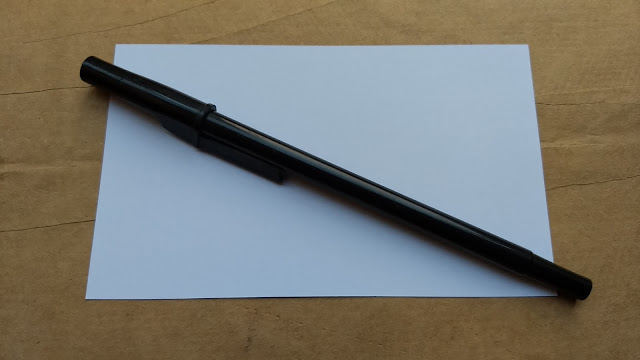 Papermate El Cheapos. Blobby ink, but last forever. Spin well with a cap on the butt. Acceptable choice, unless you have the option of: 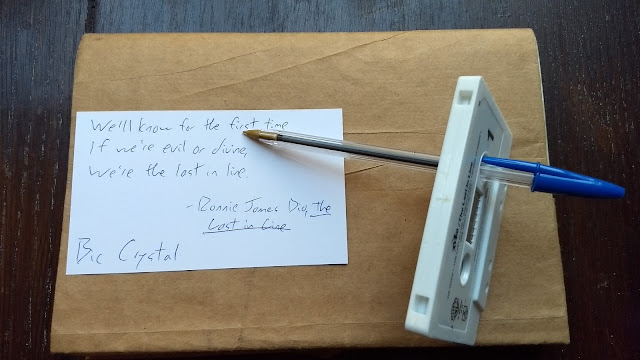 Bic Crystal. Platonic ideal of the ball-point pen. Perfect design: looks good, looks potent, but accessible; fits the hand, accommodates any style. Ink is decent, and can be laid down on essentially anything: paper, denim, skin, walls, seats, Converse Chuck Taylor All-Stars. As Robert Heinlein once said, "I feel the way about a Springfield that I do about a Gooney Bird; some pieces of machinery are ultimate perfection of their sort, the only possible improvement is a radical change in design." (Glory Road, p. 58) That's how I feel about the Bic Crystal. Also a good example of William Gibson's dictum "the street finds its own uses for things", in that the hexagonal barrel is the perfect size to stick into a cassette tape for manual fast-forwarding. Perfect for the checkbook, ideal for postcards and envelopes, superb for debate spinning. 9/10; as close to perfect as this world can offer.
Pilot V5. Can be debate-spun, but for whatever reason, I never do so. Not great for check carbons; perfect for envelopes, rarely bleeds; mixed bag for postcards, often smears. Beautiful thin line. Can write pretty small with it. Barrel the right size for my slim paws. Lined up like this, it's not wildly impressive. But... 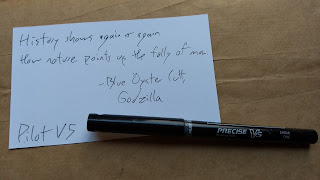 Somewhere after high school, I spent a lot of my free time (read: fired by the movie theater, working a couple days a week at the gas station, before getting fired there, too) playing Wing Commander on somebody else's computer. It's a game where you fly around in space ships shooting down space ships flown by giant space cats, and it had a really good manual. One of the weapons was called the "Mass Driver" and, from memory, it was described in the following way: "No pilot ever made a mistake engaging the mass driver." (NOTE: I was pretty close! The basic fighter weapon - medium range, medium damage, nothing special. The mass driver cannon is reliable and accurate. Heat build-up and power drain are minimal. Though lasers and neutron guns are more effective in certain situations, no pilot ever went wrong activating a mass driver.)
That's how I feel about the Pilot V5. You never go wrong reaching for one. 8.8/10; lately, I leave the Crystal at work, and use the V5 for personal writing. Boundaries are important.
Posted by Fat Contradiction at 6:46 PM

Email ThisBlogThis!Share to TwitterShare to FacebookShare to Pinterest
Labels: Blue Öyster Cult, Dio, hands are more than a way to interface with a controller, I have a problem, overanalysis, packing, work