I love the slasher genre of movies. I have watched a lot. Historically the genre took place between 1978-1986. For me it starts with Halloween (1978, John Carpenter) and ends when The Texas Chainsaw Massacre 2 (1986, Tobe Hooper) decided to be a comedy. Okay also, I'm not saying that makes Chainsaw 2 a bad movie by the way, I love Bill Moseley as CHOP TOP, so many great one liners he has: "Dog will hunt," and "Naaaam flashback," spring to mind. Ironically the main reason I love slashers though is because they are really fun.

I've wondered why everyone says Black Christmas (1974, Bob Clark) is the first slasher, mainly because Blood and Black Lace (1964, Mario Bava) is about a masked killer murdering several beautiful young women in a fashion house. Why isn't that the first slasher? I've learned that it's probably because Black Christmas added the final girl device, and takes place on a holiday. Good enough for me. But since none of this is official, I still call Halloween the first slasher because of the final girl + masked killer + takes place on a holiday formula, but adds nudity and graphic violence, (with a cool synthesizer score).

To switch topics, Jason Blum's Blumhouse production co. has had a really good 2017 for horror movies, partnering with Universal releasing Split (2016, M. Night Shyamalan) and Get Out (2017, Jordan Peele).

And since it's October and I watch a lot of horror movies when this time of year comes around I couldn't resist going to the theatre yesterday on Friday the 13th. 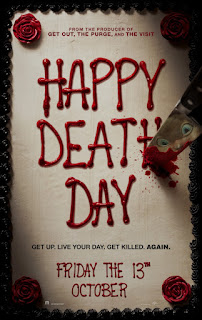 Happy Death Day (2017, Christopher Landon) is a fun PG-13 post-slasher with a Hollywood life-affirming message built in. That title works.

I just wanted to report that I had a good time and found the whole endeavor emotionally effective. Happy Death Day takes place on a college campus and involves the insolent, witty teen milieu found in Heathers, Clueless, and Mean Girls, but in a sorority. From the first frames, as the poster tips off, the Universal logo resets itself several times to set the tone.

The craftsmanship of the narrative is well done and reminded me of my favorite teen genre-defying movie Detention (2011, Joseph Kahn) in ways; there's even a girl killed in a way as spectacularly designed as the murder of TAYLOR FISHER. And I have no complaints about the lack of explicit scenes of violence. Coincidentally I rewatched Blood and Black Lace the night before and was surprised at how little was actually shown on screen when its murders occurred. So what we get is Groundhog Day as a springboard into a deliriously exhaustive tale of final girl TREE on a mission to figure out how to escape her catastrophic time loop.

And lucky for me I resisted looking at my watch out of curiosity to know when it would end, because I got sucked in and was genuinely surprised at the development of the narrative. Another great thing about Happy Death Day is how many different places it goes and how fast, if that makes sense. I feel like most traditional movies often take place in only a few locations, during the span of a short period. Or at worst there are those 12 Angry Men types--mostly all in one place in near real time has never struck me as an impressive innovation. Happy Death Day covers a ton of ground and like at ADHD speed. And for me that's one of my favorite novelties found in some newer movies. Although it still doesn't hold a candle to Detention in this regard.

Happy Death Day isn't a masterpiece or anything. But it never sucked, and I took away a lot from its ambitious re-envisioning of the slasher. As far as it fits into the post-slasher canon, it's not as dark as Scream (1996, Wes Craven), but the Booji Boy-looking masked killer gave me some jumps.
Posted by Dregs Erroneous at 9:31 AM