A Cure for Wellness

One of my favorite games as a kid was the Memory Game. You know, the one where you take turns flipping cards over and trying to match two with the same image? Anyway, that’s part of where I think I get the compulsion to associate movies with other places I’ve seen a similar scene, or motif, or technique, or heard the same song. But I’m trying to cut down on it. Like in my Jojo Rabbit post I refrained from mentioning The Tin Drum (1979, Volker Schlondörff) or Wes Anderson.

But another game I loved was Candyland. Its influence on my taste in movies is apparent when I think of how often I enjoy rewatching Alice in Wonderland (2010, Tim Burton), even though there’s not much to it except its look, which is odd because I reread both of the Carroll books often? Then there’s Marie Antoinette (2006, Sofia Coppola), the only movie that has an eye candy fantasy art direction, costumes, hair, makeup and is perfectly created to fit its post punk soundtrack. Marie Antoinette is also one of my top favorite movies and a masterpiece I could discuss at length.

The look of Paradise Hills (2019, Alice Waddington) made me want to see it. The all white costumes look like something out of Alice in Wonderland. It looks like a fairy tale. And I’ve been a sucker for the beauty of Emma Roberts, so the image of her with pink hair intrigued me. 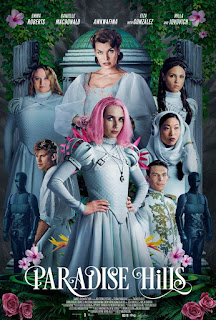 Paradise Hills is a dark fairy tale. It’s easy to follow, being a simple clear plot that develops into an original narrative I didn’t feel was all that predictable or anything. And it’s moral is timely. It has a great ending. But what’s wrong with it?

Something about Paradise Hills is cheap. The production design in many of the night scenes feel like what I imagine a neon Miami nightclub looks like. I don’t know why I’m complaining about this because Dreamland made a handful of masterpieces that will last long into posterity, created by John Waters, Vincent Peranio, Van Smith et al. Is it the soft digi-fuzzy video aesthetic that’s bothering me?

There’s also the sudden and underdeveloped way the Eiza González character falls in love with UMA (Roberts). It’s like as soon as Uma gets to the spa or clinic or whatever AMARNA (González) is smoking a cigarette in a cave and they meet, then Amarna has to be with Uma and that’s all that matters to her. Maybe I missed something?

Paradise Hills has that late nineties indy charm going for it too though. I’ll say it’s fun, but flawed. And Emma Roberts is dreamy, so great casting.
Posted by Dregs Erroneous at 11:59 PM

Email ThisBlogThis!Share to TwitterShare to FacebookShare to Pinterest
Labels: 2019 Movie