Todd Haynes’s body of work as a whole is an impressive contribution to cinema. His films are fun, inventive, intelligent, and project a vast spectrum of emotions through his protags. His art is never achieved at the expense of heart. Even his made for TV miniseries resulted in a work as satisfying as any of his best films. Haynes takes trash genre aesthetics and repurposes them as a means to shape his own style. Is he that rare case (in cinema) of high art legitimately turned pop? Or am I exaggerating how wide his appeal has become?
Haynes isn’t easy to classify. The second I find myself tempted to describe his indulgence in artifice I’m immediately confronted with Safe (1995, Todd Haynes) and its committed psychological realism. Also what other filmmaker only makes period films? This is a key to enjoying Haynes’s brilliance: the contrary effect of simultaneous verisimilitude along with distancing the audience. 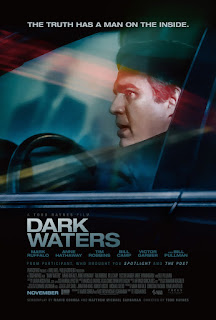 Dark Waters (2019, Haynes) is yet another instance of Haynes taking his style of filmmaking into a different direction, namely history-based social drama. It’s Haynes relinquishing his role as artist in exchange for chronicler (he can still pull both off though). But being a longtime fan I find the most enjoyable aspect of Dark Waters is the familiarity with Superstar: The Karen Carpenter Story (1988, Haynes), Poison (1991, Haynes) and Safe; having the awareness of this string of films from early in Haynes’s career 30 years ago with their explorations of innocent characters succumbing to advanced stages of corporeal decay.

What makes Dark Waters more than an Erin Brockovich knockoff is Haynes’s aesthetic. And while he’s gained subtlety with maturity, his uncanny ability to terrify hasn’t diminished. What stands out for me are some degraded shaky images of cattle mutilation found on a cache of VHS tapes stored under the floorboards of a quiet rural farmhouse where a quaint family lives. Also a POV shot of a little girl riding her bike with her little sister, smiling and revealing a mouth of black rotting teeth. These are the primary examples of Haynes’s aesthetic—the feminine sphere of the woman’s picture disrupted by sci-fi horror motifs. And Dark Waters does it while maintaining a commitment to realism not seen to this degree before with Haynes. Or maybe it’s just more refined.
Another benefit of Haynes’s penchant for period pictures is the authenticity found in the production design, art direction, hair, and costumes utilized in recreating middle-class suburban homes and women’s appearances in particular. And when Haynes does period pieces they’re most enjoyable when the period is recent. (I still get a kick of how Safe was made in the early nineties but set in the late eighties.) Dark Waters boasts some faux wood grain and gilt filigree touches that give such a lived in quality to the homes in the world of the film (were there doilies or am I just imagining there were?), and the baggy legged men’s suits along with prevalent shoulder pads regardless of gender is fun.
Trivia Fact: Ed Lachman (who’s shot Haynes’ last 5 films and Mildred Pierce) was also the DP on Erin Brockovich (2000, Steven Soderbergh), the last movie Soderbergh would use a cinematographer on before serving as his own DP for all of his subsequent movies. Dark Waters has a distinct (shot on film!) palette, with blue popping up a lot, with hints of straw and many artificial-hued practical fixtures, several night shots, and generally dark throughout. Lachman really emphasizes color in the eighties Robby Müller tradition.
Even more of a trivia fact: Lachman was Müller’s assistant on The American Friend (1977, Wim Wenders), which is considered to have pioneered the technique of implementing un-corrected fluorescent tube practicals in shots in a way that would go on to be seen in much of Lachman’s work.

So, in addition to the look of Dark Waters the other big draw is its domestic drama, especially the women. Without Anne Hathaway and Mare Winningham the movie would just be a bunch of suits arguing. And now that I’ve highlighted what works for me in Dark Waters, to conclude I’ll admit that I was skeptical at first as to whether or not its environmentalist agenda would get in the way of its accessibility. But that wasn’t the case because foremost I engaged with the people this story is about. Historically the events depicted in Dark Waters are unsettling to say the least, and Haynes was the perfect person to blend it all into a compelling drama.
Posted by Dregs Erroneous at 2:22 PM