Almodóvar makes films about passion. All his films are set in España. His cast usually revolves around a strong female character, supported by other women, junkies, homosexuals, and transvestites. His art direction is saturated with primary colors. And his soapy lurid narratives depict his own passions for cinema, novels, art, and the theater. Yet let’s not forget how often he features medicine and particularly human anatomy in his work too.

Of all his films that I’ve seen none are bad. But All About My Mother (1999, Pedro Almodóvar) was brilliant, a breakthrough where all of his themes coalesced into a career-defining work that achieves everything he’s best at, punctuated with a romantic thank you to and for his fans and subject. Almodóvar is not a woman’s director, he’s the woman’s director.

Much of what followed maintained a high degree of quality. All of it displays a polished, flawlessly immaculate sense of décor. The Skin I Live In (2011, Almodóvar) finds the writer-director tailoring the horror genre to his vision and making it fit like a glove. 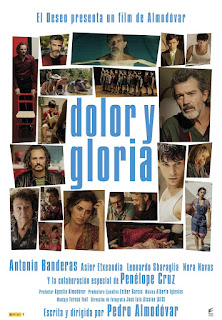 Like Julieta (2016, Almodóvar), Pain & Glory (2019, Almodóvar) feels incomplete, and tells the story of a character at the end of middle-age, trying to find the missing piece that will provide meaning for life.

But Pain & Glory is boring even. It’s about an aging film director with all sorts of physical ailments who starts freebasing heroin as an escape into memories of his mother and an illiterate laborer whom he taught to read and write while he was a young boy. There’s also the discovery of a meaningful relationship from the director’s youth and its role in his inspiration to write about it.

In general, a movie about a rich successful artist moping around elicits little sympathy from me. At least he’s Spanish. If this dude was white Pain & Glory would suck way more. Pain & Glory is also very quiet and calm. I just couldn’t find anything compelling in it. I kept thinking even if the protagonist, played by Antonio Banderas, shot up that might have given the film some kind of edge, but he just chases the dragon. In today’s age of opiate addiction I don’t even find that smoking horse makes him a junkie—plus it doesn’t cost him anything. So what’s the point? Who cares?
Posted by Dregs Erroneous at 11:59 PM