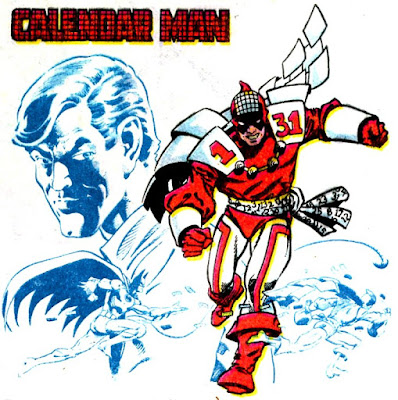 (Your author, coming at you with all the powers he gained after being bitten by a radioactive page-a-day Far Side calendar in middle school.)

I've been thinking on and off about calendars since about 2015. That was a busy year. I needed to juggle two big projects: one usually on alternate Sundays, one roughly every 10 days, all year long, these alongside all the other normal activities constituting everyday life (food, work, family, art, uprising, etc.), and it was difficult to do such juggling. What worked for me that year was to: print out Bram Moolenaar's fold-and-stand-up desk calendar and 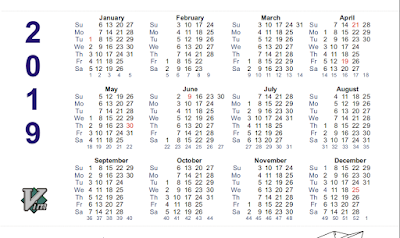 (Bram's yearly calendar. I recently discovered that this is pretty much the output of the Unix utility ncal with the -w flag! Unix can be pretty cool.)

It worked well for me! Obviously, this is not a tool that accepts a great deal of information, but for helping visualize a cadence of more or less regularly occurring events, it served effectively.

Over the next few years, unfortunately, the events to coordinate got less regular, less predictable, and probably more numerous. Bram Moolenaar's calendar stopped helping me organize things. That's whenDavid Malki stepped up. He has several long, interesting posts on calendars, and the high-end calendar he makes he is a beautiful, funny, and probably useful object. But what really fired my soul was his devastatingly simple "continuous calendar" idea1, just a year's worth of boxes organized by month, fitting on six pages of printer paper. 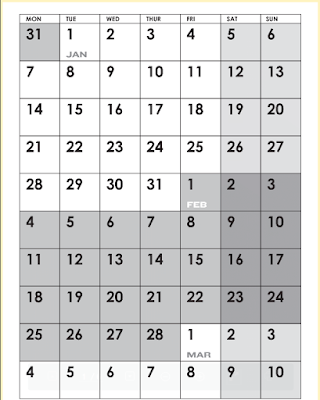 One reason for my soul's resonance with this object is context: at my work, a very common activity to to grab a blank piece of butcher paper, sketch out a grid representing a month or so, and calendar out some events in / for / of / constituting a campaign. This simple template of Malki's saved the drawing-and-adding-dates steps, and I used it a few times in different campaigns to help visualize timelines, deadlines, and possible conflicts. It worked well.

What didn't work well was trying to use the template to help organize my life. I had a couple problems with what he had made:

So eventually I decided to stop being frustrated with a tool that didn't work for me. I decided to try to brew my own. I wanted bigger squares, I wanted weeks to start with Sundays, and I didn't want any shading. The best way to attain bigger squares seemed to be to move from portrait to landscape. I really liked Malki's insight about making the months flow into each other, so I kept that layout. I made a couple three-month templates and tested them, and they seemed to work the way I want them to work. 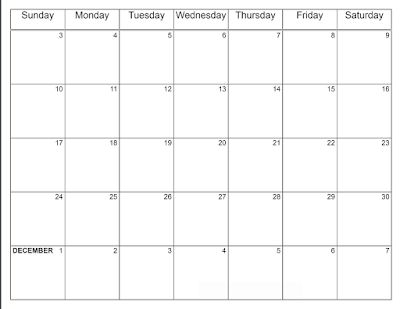 (My calendar looks like this. I like to mark it up with bill due-dates in red, and other notable things in black.)

If you would like to see if this tool will serve your purposes, you can download it and print it out and play with it. (Right now it runs from October 2019 through February 2021, so I recommend judicious use of the "print selected pages" function so as to save our mother the Earth from additional abuse.) If you find that you like using this tool, why not send David Malki a couple bucks: it was all his idea anyway! If you find that this tool doesn't work well for you, why not spend a little time figuring out why not, thinking about what you need, and go try to make something that will help you?

1 What's hilarious is that Malki uses a different term, not "continuous calendar":

By that, I mean a calendar that doesn’t have any breaks between months. I think I invented the term? By that, I mean “nobody else has ever used this term.”

Evidently, he IS the only one to use the term. Since I use a different term, perhaps I ... invented the idea? (No, no clearly I didn't.) Anyway, this is a long digression prompted by my inability to remember what words he actually used. 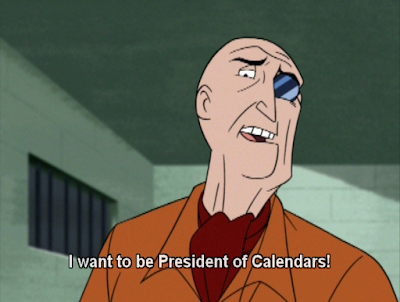 (Your author's ambitions when it comes to calendars.) 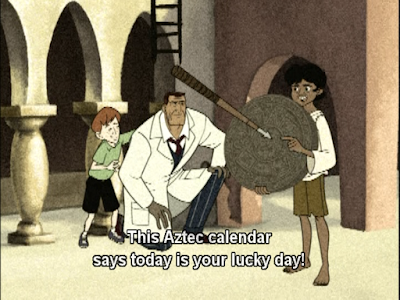 Posted by Fat Contradiction at 1:52 PM

Email ThisBlogThis!Share to TwitterShare to FacebookShare to Pinterest
Labels: are you fucking kidding me with this shit, calendars, credit where credits due, David Malki, homebrew, never thought of it that way before, overanalysis, pen 15 club, Venture Bros., Wondermark, work

I got Malki!'s name wrong throughout, due to sloppiness and a failure to fact-check. I leave the error in as a example to chide myself to do, and to be, better in the future. For the record: his name is spelt Malki!, not Malki.

It may interest you to know that https://www.neuyear.net/ sells gigantic wall calendars with the boxes organized in this continuous/progressive/Only Sensible Way To Represent The Actual Flow Of Time format! I've relied on my dry-erase full-year wall calendar for years.

Nice, thanks! For a lot of purposes, I really like the portable version I can have with me pretty much anywhere, but I could DEFINITELY use one of those for work.

The way you explain is very easy to understand. You can also check our blog : wall calendars

Hello, I read your blog occasionally, and I own a similar one,You can read my blog for : promotional calendar