Any doubts I’ve had about the ability for older filmmakers to deliver works possessing the vitality found earlier in their careers are gone. My bias began recently when Tarantino said he would retire after his tenth film and he doesn’t want to be an old man making movies. And the more I thought about it the more I realized directors’ later works do indeed decline in quality.
But I finally became convinced that old men can sometimes make their best work late in life. In cinema, there are no rules and there are always exceptions. My favorite Buñuel films are Viridiana (1961), The Exterminating Angel (1962), Belle de Jour (1967) and The Discrete Charm of the Bourgeoisie (1972), which were all made toward the end of his career. Malick’s anti-plot phase didn’t begin until he was in his late sixties with The Tree of Life (2011). And now Scorsese shows once and for all that I have all the proof I need. 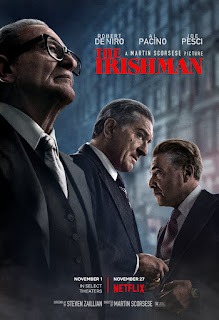 The Irishman (2019, Martin Scorsese) is a mob epic that delves into the legend of Jimmy Hoffa. Combining the crime genre with a hint of history has always drawn me to the novels of James Ellroy. And as David Thomson points out the most fascinating parts of JFK (1991, Oliver Stone) are the scenes of the “lurid gay underworld.” But neither come close to mining the richness of Hoffa’s life.
What excited me about the premise of The Irishman beyond the popular rumors that I’ve grown up with surrounding the disappearance of Hoffa, was his role in the International Brotherhood of Teamsters and alleged ties to organized crime—ambitious territory for a screenwriter and director to tackle. But they succeeded. The political intrigues and portrayal deliver, and HOFFA’S (Al Pacino) “If you have it, a truck brought it to you” speech is incendiary.  I left the movie theater exhilarated today after everything The Irishman did for me as a viewer.

Does it live up to Goodfellas (1990) and Casino (1995) though? Easily. Not only does The Irishman show the expertise, refinement, and calm of Scorsese as a filmmaker not found in those earlier crime operas; and not only is its cast all close to pushing 80; but, the characters are older men whose lives are anchored in a perspective that they only attain toward the end of their lives. And Zaillian’s screenplay gives us the intricate web of conspiracies in a ratio perfectly in balance with the development of the ensemble of characters.
You often hear talk of modern movies being faster to cater to shorter attention spans. I’m not sure if I find truth in that. While The Irishman blew by me despite its three and a half hour running time, I often thought about how at times it felt slow, in a good way, or classically and confidently eased by at times. Especially the climax: I didn’t look at my watch or get out of my seat once, but I sensed it approaching, and as it did I felt a tranquil euphoria and thought it was as though the plot smoothly glided by like one of the large bodied lead sled domestic ‘70s autos often seen throughout the film. (Yet I was on the edge of my seat at the same time, contrarily in suspense not knowing what was about to happen.)
And Goodfellas was already displaying a rapid jumpy wired on coke narrative with voiceover, flashbacks, freeze-frames, and chronological deconstruction as types of its screen vocabulary that I’d grown up with. So no, I don’t think movies have gotten faster? The Irishman utilizes several of those techniques, like voiceover, flashbacks, and especially cutaways that make me hopeful it will connect with a younger audience. Another thing I enjoy immensely in The Irishman is its staggering amount of locations and how quickly we jump all over the place geographically and chronologically throughout the story.
Another motif I spotted occurring often is narrative repetition. Paul Schrader describes Bresson’s use of “doubling” (or tripling) in Pickpocket (1959, Robert Bresson) citing the scene where MICHEL writes in his journal  “I went into the hall of a large bank,” and says through v.o. “I went into the hall of a large bank,” while we then see him go into the hall of a large bank. This occurs several times in The Irishman, with, for example in a scene where FRANK SHEERAN (Robert De Niro) speaks in v.o. saying: “Whenever anybody says they're a little concerned it means they’re very concerned,” as a man sitting across from him says “I’m a little concerned.” Then the man says he's very concerned. Frank goes on to say “and when somebody says he's very concerned, he’s desperate.” Schrader says this is “contrary… to normal film language,” but with Scorsese there’s a comedic dimension that’s added. This technique was likely cultivated to its apex in Casino with the scene where Pesci’s character says something about these “guys back home,” in v.o., on top of us seeing these guys back home, and on screen text that reads “back home.” It’s really funny and The Irishman knows it.
Also like Goodfellas and Casino, The Irishman is a jukeboxical—but most of its playlist is confined within the end of the first half of the twentieth century. And The Irishman’s songs also display Scorsese’s theme of maturity with their nostalgic, soft, sentimental romantic beauty and tone.

Something else that gets praise from me in The Irishman as a sign of maturity or wisdom that comes with age is not only its restraint and refinement of its mise en scène and songs used in its soundtrack, but in a sense the way it replaces the rampant coke binges and wild sex of Goodfellas and Casino with more of a family ethic and sense of loyalty. Does that make me sound square?  I mean I applaud Scorsese for not just churning out the same formula.
There is so much more Scorsese improves upon with The Irishman. The goombah slang is plentiful and makes for an authentic genre entry—like when Frank suggests using “candy.” But it’s all here: the violence, the f-word, cars, the restaurant and nightclub sets, the suits, pinky rings, the hairdos, and maybe most of all, the eyewear. Nobody’s got nuttin on Scorsese when it comes to thick framed bifocals, sunglasses, or gradient lenses.

In closing I can’t remember the last time I’ve been more excited seeing a cast make their appearances on screen: Robert De Niro and Joe Pesci are magic, Scorsese manages to keep Pacino from verging into farce while instead getting a simmering, committed performance, Harvey Keitel, and hundreds of supporting actors (and even bg have an intriguing look in Scorsese’s Philly). Yep I really love The Irishman.
Posted by Dregs Erroneous at 4:21 PM